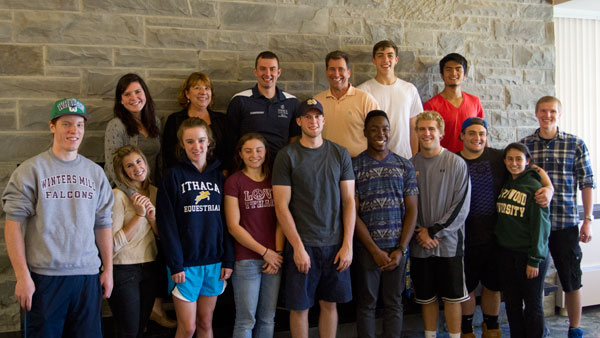 With boxes filled with personal items packed up, Scott Flickinger, former program coordinator of intramurals, sat down in his office in Hill Center and sent one last message to his employees, telling them to hold the intramural program in the highest regard as he said goodbye to Ithaca College on Sept. 27.

After 6 1/2 years of working at the college, Flickinger has taken the position as assistant manager with Boston University’s club and intramural sports department. Flickinger announced on Sept. 24 that he would leave his job and that Ben Paquette would take his place.

Flickinger said working in facility supervising and facility management has helped him to move forward in his career.

Since coming to the college in January 2007, Flickinger said, one of his greatest accomplishments has been expanding the intramural sports program.

“Originally, we used to have right around, maybe 900 to 1,000 participants,” he said. “For the most part, we’ve had close to 1,300 to 1,400 unique participants since I’ve been here, so it’s grown each year. We get more and more people interested in campus recreation, particularly recreational sports.”

Flickinger stressed how important the students have been in achieving his accomplishments and how they have contributed to the evolution of the program. At the same time, Flickinger has been a role model to the students.

Megan Wagner, the program coordinator of recreational sports at the college, said Flickinger has been influential in helping students working in recreational sport improve their skills. In order to get more students involved, Flickinger has also been innovative in creating unconventional sports, such as battleship, a game where teams of four compete in canoes and try to sink one another using water buckets while also shielding themselves.

Flickinger formerly worked at The Ohio State, where he graduated in 2002. He began as a student intramurals official in campus recreation and then became a supervisor one year later. After interning with the department from 2003–2004, Flickinger was hired as a recreational services intern at Bucknell University, where he was until getting his job at Ithaca in 2007. Comparing the different schools, he said the students here at the college are what differentiates the intramural program from any other.

“Boston University is going to have its work cut out for them,” Flickinger said. “We have students that are extremely involved in campus recreation, so much so that a lot of them take the lead in terms of working behind the scenes, administratively.”

Paquette, like Flickinger, comes into the college’s program with experience at another institution. During his four years with the intramural program at SUNY-Cortland, Paquette has been an official, supervisor, head supervisor and graduate assistant. He is currently finishing up his master’s degree in sport management at Cortland.

Paquette said his transition has been quick, as he was in Flickinger’s office for the week before Flickinger left, learning the ropes and sitting in on meetings. Paquette said he would like to build on what Flickinger has done by creating a more hands-on environment. Cortland has about 3,500 intramural participants compared to nearly 1,300 at the college. Paquette said he hopes to integrate successful ideas he had at Cortland into the college’s programming.

“With the larger program at Cortland, I have a lot of material and things that we’ve updated and changed with my background in physical education to make it more interactive,” he said. “Really, come Block III and Block IV, I’m really going to take a big dive into the training sessions, trying to revamp them in the best possible way we can, really get some hands-on [training].”

Moving forward, Paquette would like to continue where Flickinger left off and maintain the success he brought to the program. Flickinger added that it is going to be nice having Paquette at the college because he will bring a fresh perspective to the program.

“After a while, what I do, a lot of it is my personality, the way I look at things,” Flickinger said. “It’s going to be great to have [Paquette] in here because he’s gonna have a new perspective, he’s going to have newer ideas, and hopefully it’s just going to take this program up even higher.”