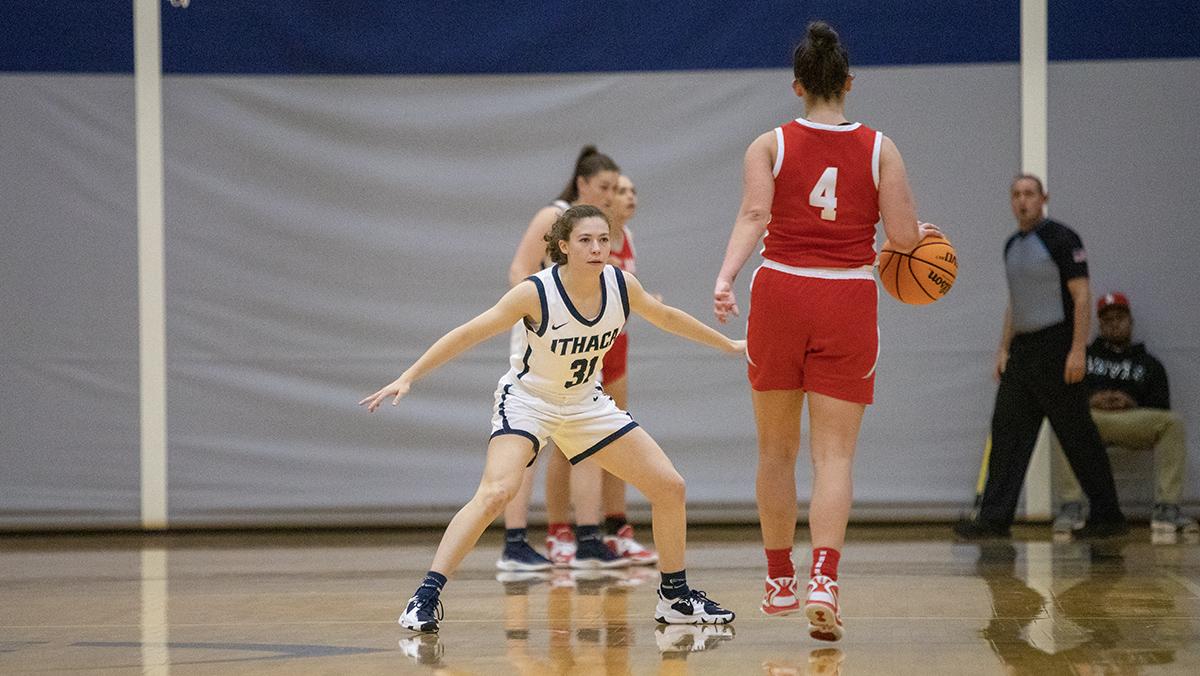 Just three games into the new Ithaca College women’s basketball season, the Bombers are 3–0 and have seen contributions from most members of the team.

But while it was expected to see the returning seniors and graduate students playing well, one surprise for the team was first-year student guard Zoraida Icabalceta. Through her first two games as a Bomber, Icabalceta is leading the roster in field goal percentage, 3-point percentage and steals. She ranks second on the team in points per game with 10.3 and has logged 67 minutes of playing time.

In her first career game Nov. 8, Icabalceta spearheaded a 13-point overtime comeback win for the Bombers over SUNY Cortland. She led the team with 19 points, five rebounds and five steals in 31 minutes off the bench. She shot 6-of-9 from the field and 4-of-5 from long range, both the best marks of either team in the game.

Coming off the bench again Nov. 11, Icabalceta put up 10 points, one rebound and one steal in 18 minutes, helping the Bombers to a 72–48 win over Montclair State University.

During the South Hill squad’s victory over SUNY Geneseo on Nov. 15, Icabalceta earned two points, one assist and three rebounds in 19 minutes.

Sports Editor Aidan Charde spoke with Icabalceta about her start to her season and future career on South Hill.

Aidan Charde: The big story after the season opener was your stat line off the bench. What was your mindset going into that game?

Zoraida Icabalceta: My mindset [during] that game was really just about defense. I thought, you know, [if] I work hard on defense and then it’ll transition to offense to be able to find my groove that way. … I think it just happened. I wasn’t really expecting to play as much, or score as much, or have that big of an impact.

AC: Would you consider yourself more of an offensive or defensive player?

ZI: I would consider myself a defensive player. I feel like that’s where the game comes from, like, if you play good on defense, it’s gonna transition to offense. So defense always has got to be the first priority as a player.

AC: Were you expecting to be heavily involved coming in off the bench or is that a surprise to you too?

ZI: I think it was a little bit of a surprise to me. I just feel like our team’s a huge veteran team. Like, there’s tons of juniors and seniors and grad students. So I’m just excited that I get to, you know, play a little bit. … They’re all super nice and super supportive. So it’s been really nice playing with them.

AC: How was the preseason?

ZI: I think … it was just good to get to know how everybody plays and get into the schedule of how things are going to be during the season. … [The coaches are] super supportive. They have lots of input and [we have] lots of personal relationships with them too, outside of basketball. … The freshmen have weekly meetings [with head coach Dan Raymond] regardless, so I’m meeting with him every week. It’s good to talk to him just about how I’m doing in college and all that.

AC: What are your goals for yourself this season?

ZI: I think I just want to keep the defensive intensity that I’ve been putting forth. And you know, hopefully be consistent with offense, but [I just want to] play my role as a team player.

AC: A few big names graduated from the team last semester, like Grace Cannon ’22 and Megan Yawman ’22. Have they been in touch with the team?

ZI: Both of them have come to games to support [us] and that’s been really cool seeing them there and having their support … even though they’re not on the team anymore.

AC: What made you want to come to Ithaca College?

ZI: For me, academic-wise, I’m doing PT. So I really liked the PT program. And then coach Raymond was just like, super supportive, and I felt like it would be a good fit for me basketball-wise. … I really like it [here]; I really enjoy the practices and the team. And playing games is fun too.

AC: Are there any particular games you’re looking forward to?

ZI: For me, Catholic [University in Washington, D.C.] because it’s really close to my home, so my parents and my friends and old coaches can come. So that’s what I’m looking forward to.

AC: After how last season went for the team, are you all expecting the same this year?

ZI: I think the whole three-peat of the Liberty League is sometimes talked about, so you know, we’re going for a four-peat. But for the most part, it’s a game-by-game type of mentality.