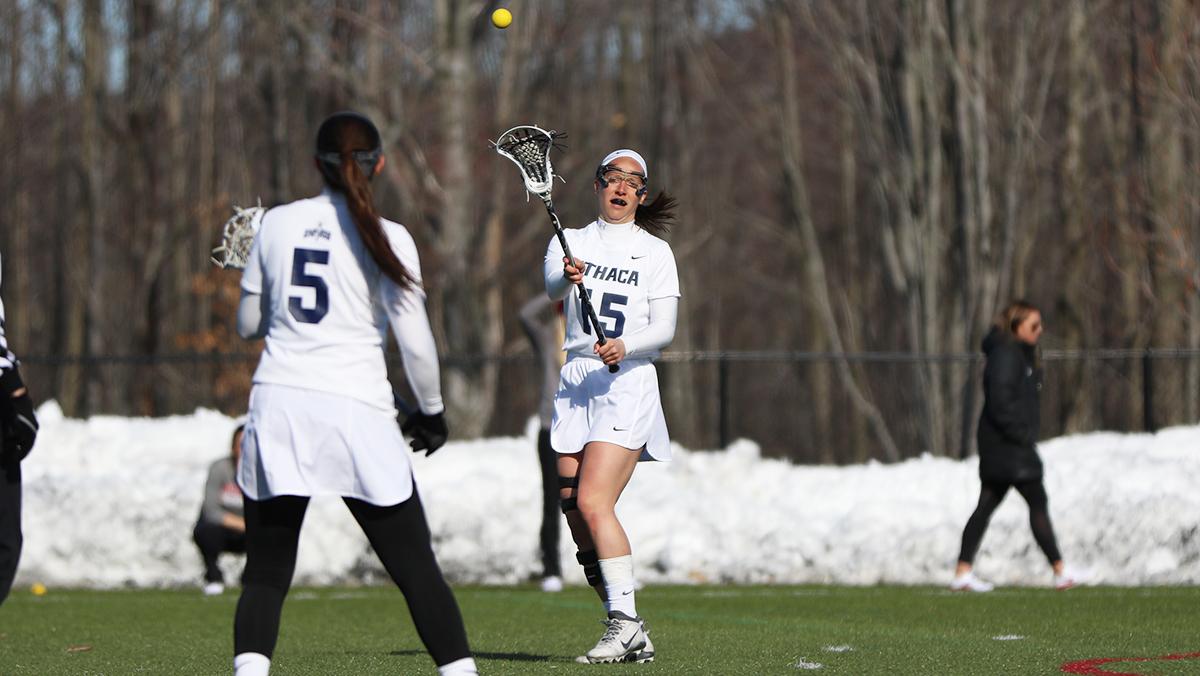 On April 7, with 20:41 left in the second half in the game against SUNY Geneseo, graduate student Ally Runyon achieved the goal most players have — she broke the women’s lacrosse program record for goals scored. The record was set by Tracy Rivas ’13, who had 184 goals by the end of her senior year. Runyon now has 186 goals and will be setting the bar even higher for future athletes, as she still has at least five games to play in.

Staff Writer Madison Bess spoke with Runyon about breaking the program record and how her injury helped her in the long run.

Madison Bess: When did you start playing lacrosse?

Aly Runyon: I think I was like 6 or 7. I am pretty sure I was in first grade.

MB: What is your favorite moment of your career?

AR: There have been a lot of favorite moments. Probably my favorite has been this year when we beat Trinity and Cortland because we’ve always had tough games like those and always really close to winning. But this year, we were finally able to pull out the win. It was satisfying, and we came together as a team, and it was just so fun.

MB: Do you think anyone is going to beat [your record]?

AR: I think someone will. There are a lot of good, young players. If it is beaten in the next couple of years, I would not be surprised. I am going to get as many as I can to raise it up.

MB: When did you realize you were close to the record?

AR: It is kind of funny. The girl who broke it before me was a senior when I was a freshman. My freshman year, a guy I know said, “Tracy broke the record.” But he thought I was going to break it. And I said that was hilarious. I didn’t think about it again until after junior year and I got hurt. I was putting together the pieces and realized it was possible. I did the math and realized it was real. After three seasons, I realized it.

MB: What was the injury?

AR: I tore my ACL my junior year in our championship game. I didn’t play last year. By the time I was ready to play, I would have missed a bunch of games. I wanted to end the career on a good note. I decided not to play fourth year and play my fifth. I am really happy because I was going to be here for school anyway.

MB: What was the career goal like in your mind?

AR: I knew I needed one goal to tie it and two goals to beat it. I didn’t want to think about it before the game. If I thought about it, I would have made stupid mistakes. I thought about winning the game and what to do on offense and defense. I wasn’t thinking to get the goals. After I scored the second one, I felt relieved. I knew I did it, and it was like a weight off my shoulders. It was a cool and satisfying feeling. I don’t know how to describe it. It was a sense of accomplishment because I did not know it would ever happen.

MB: What is the plan moving forward?

AR: Definitely our short-term goal is the Empire 8 Championship. I have been dying to win one every year. I think we are capable and have more than enough talent to do so. Beyond that, we want to continue to go as far as we can in NCAAs. I think we [can] push it this year. We have so much potential to go far.

MB: Most challenging part of your career?

AR: The whole rehab process for my ACL was long and hard, and it was hard to not play. I just love playing lacrosse so much and I have my entire life. Sitting back and watching was something I had never done. I had never been hurt or sat out of anything before. Not being on the field was the hardest thing.

MB: Did the injury help you?

AR: I think it made me realize how much I love lacrosse and how thankful I am to have such a great team and coaches. It pushed me to work hard for rehab and to come back in the best shape and really pushed me to work hard in the offseason and to be as good as I was before the injury. That was my motivation: to get back to where I was, if not better.

The women’s lacrosse team almost came back in the end to defeat No. 14 ranked William Smith, but lost a tough played game 10–8.