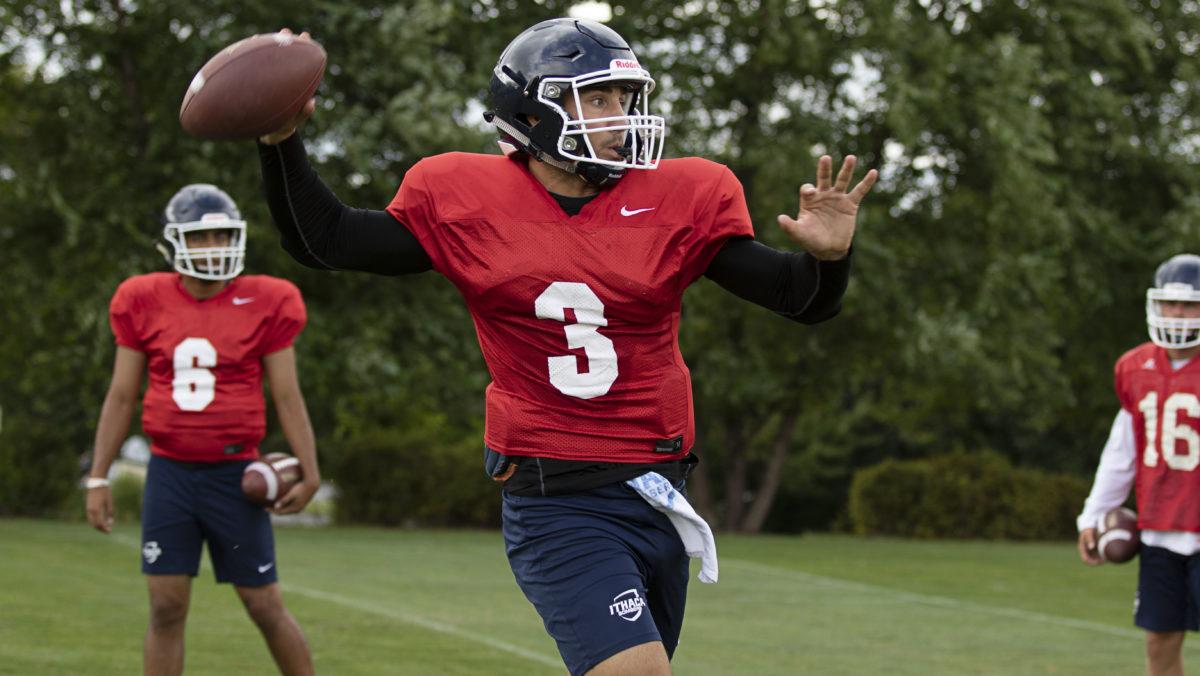 PETER RAIDER/THE ITHACAN
Senior quarterback Joe Germinerio looks to make a pass during a practice Aug. 27. Germinerio was an All-American at The College at Brockport in 2017 before transferring to Ithaca College for the 2019 season.
By Emily Adams — Sports Editor
Published: September 5, 2019

The Ithaca College football team has a surprise addition to its offensive lineup this season under unusual circumstances. Senior quarterback Joe Germinerio transferred to the college for the fall season to compete as a Bomber in his final season of eligibility.

Germinerio transferred from the College at Brockport in Brockport, New York. He led the Golden Eagles to the Final Four of the NCAA tournament in 2017 and the Sweet 16 in 2018. He holds eight passing records at Brockport. He was also named an All-American by d3football.com in 2017.

So far this season, Germinerio has been splitting reps in practice with junior quarterback Wahid Nabi. Nabi has been the Bombers’ starting quarterback since his freshman season and led the team to back-to-back Cortaca Jug victories in 2017 and 2018 as well as a bowl game last season. Nabi said that he was disappointed when head coach Dan Swanstrom told him Germinerio was coming to South Hill. Nabi said he knew Germinerio would be competition for the starting spot.

“Obviously it sucks to hear,” Nabi said. “It’s not something you want to have happen, but what was I supposed to do? It was a matter of it’s happening and he’s going to be a part of the team, so you have to welcome him with open arms.”

Nabi said that during the Bombers’ scrimmage against Misericordia University on Aug. 31 he played for the majority of the second half after Germinerio started the game. He also said Swanstrom has announced who the starting quarterback will be for the season, but Nabi would not reveal which of the players was selected.

“I’ve been getting first-team reps, and it looks like I will be the starter,” Germinerio said. “As Coach says, everything’s subject to change, so my goal is to keep staying at the one spot.”

“In our mission statement with the football program, one of our core values is competition,” Swanstrom said. “We think it brings the best out of everybody. [Nabi] understood that, and he said he was excited to compete.”

Senior wide receiver Will Gladney said the news of Germinerio’s transfer was unexpected.

“I was caught off guard,” Gladney said. “Just from the history of Brockport, for their starting quarterback to come to Ithaca, no one was really expecting that.”

Germinerio began his collegiate career at Division I University at Albany, but he redshirted his freshman season because he was not going to receive playing time. He then transferred to Brockport for his sophomore year and competed in his first collegiate competitions.

Germinerio said that he was originally hoping to transfer to a Division I or II school after playing most of his career at Division III Brockport. Because he only has one more season of eligibility remaining, he said the upper-level programs were not interested in a quarterback who could only compete for a single season. Germinerio said he chose South Hill because he believes he can help the program become one of the best in the country.

When he decided to transfer for his final season, Germinerio said there was no bad blood between himself and the Brockport program. Brockport head coach Jason Mangone declined to comment on Germinerio’s transfer.

“People had their opinions about it,” Germinerio said. “You get criticized no matter what you do in life. People still criticize Tom Brady and some of the best football players of all time. I knew what was best for me.”

Though Germinerio’s transfer will be significant for the Bombers on the football field, his academic standing at the college is unclear. Germinerio graduated with an undergraduate degree in finance from Brockport in 2019. However, he is not enrolled at the college as a graduate student. He is only taking 12 credits, which is the minimum required by the NCAA to be eligible for competition.

According to the NCAA, student-athletes must make satisfactory progress toward a degree as determined by the institution. However, according to Gina de Haan, a member of the NCAA’s public relations team, the NCAA does not require student-athletes to complete their degree program. Swanstrom said Germinerio put together a plan with Sean Reid, dean of the School of Business, that would allow him to compete. Reid declined to comment on Germinerio’s academic plan, citing the Family Educational Rights and Privacy Act.

On the field, Germinerio has been working on finding his rhythm with a brand new offense and coaching staff. Before the start of the Bombers’ preseason, Germinerio had not trained with a team for nearly nine months because he was not able to participate in Brockport’s off-season training after announcing his transfer.

“It’s been a long haul for me, so it’s been really nice for me to get back out there,” Germinerio said. “I’m highly competitive, but at times there were days where I really had to motivate myself. I definitely grew from it and learned, but it’s good to be back.”

Gladney said he enjoys competing alongside a quarterback of Germinerio’s talent and experience level.

“It’s just like having another coach out there,” Gladney said. “Having a guy like that that loves football that much is really great.”

Germinerio said his biggest goal for the season is to bring the Bombers the same success that he brought to Brockport.

“I want nothing more than for this team to experience a playoff run,” he said. “I was fortunate enough to be a part of two teams who went to the playoffs, and I want to share with this team how cool it is to see the sign ‘NCAA Championships’ hanging on the fence. It’s so special, and I think these kids deserve it.”