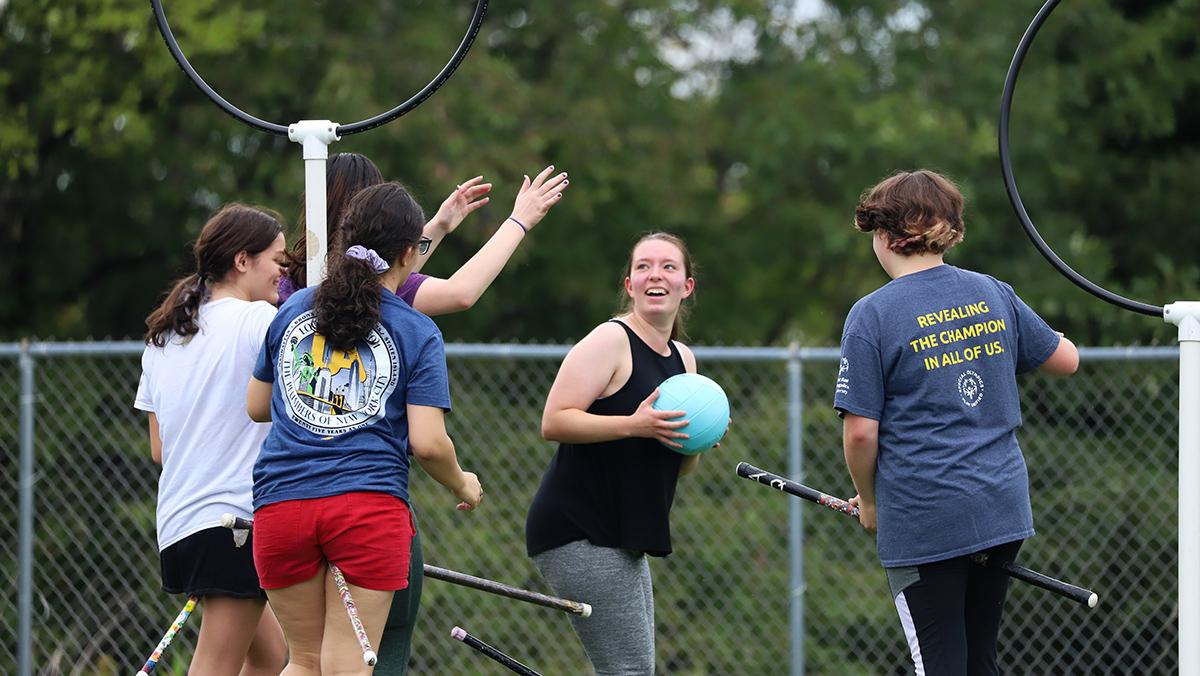 Jasmine Scriven/The Ithacan
First-year student Claudia Homiski, a member of Ithaca Hex Quidditch, holds the quaffle while teammates and opponents surround her. Her goal is to throw it through one of the three hoops, while her opponents, called beaters, try to block it.
By Tobiah Zboray — Staff Writer
Published: September 21, 2022

When Ithaca College’s students returned for the Fall 2022, many club teams returned to practice and play at the start of the new academic year. Among these teams was the Ithaca Hex Quidditch team, who returned to South Hill flying high with excitement.

Senior Lauren Mitchell said the team plays a form of quidditch referred to as muggle quidditch. Mitchell said the game involves five different positions: chasers, keepers, beaters, seakers and the snitch. Points are scored when chasers throw a volleyball, referred to as a quaffle, through one of three rings at the end of the field, while keepers and beaters try to stop them from scoring. After 20 minutes, the snitch is released, which involves someone with a tennis ball attached to a pair of special shorts while the seekers go after the snitch. The game ends when a team gets to 80 points after the 20-minute mark.

Knoell said that while Quidditch is best known from the Harry Potter franchise, the team is not solely filled with Harry Potter fans. The team does not view itself as a Harry Potter club.

With 10 members on the team and the relatively niche nature of the sport, club president senior Athaliah Knoell said the team has to do more work to get its name out there.

“I would say we do a fair amount,” Knoell said. “We had a table at the first year organization fair, we put up posters around campus, we added quidditch practices to the IC Engage page so it shows up with weekly happenings. We want to get the word out there.”

The team’s extra work in recruiting does help them reach the specific audience that they look for. First-year student Elliot House-Kelly said the club caught his attention at the first-year student organization fair.

“I saw it on a club list when I was looking at applying to the college,” House-Kelly said. “And then at the organization fair I was kind of looking for it and I recognized Athaliah at the recruiting table because she was an orientation leader, and so I decided to sign up.”

With the new year, however, the team is looking forward to regaining some stability in its schedule. The team usually practices on Emerson field, but could not during the 2021–22 academic year because the fields were included with Emerson Hall where students who had COVID-19 were isolating. Mitchell said the team ended up using multiple fields across campus during the year, even playing at the Athletics and Events center.

“Last year, it was really tough with COVID and everything,” Mitchell said. “They restricted the amount of fields that were used and the times that they could be used. So we had to use Yavits [field] and the A&E turf field, but they were really helpful in scheduling times and giving us the chance to practice.”

Knoell said the return to Emerson field makes scheduling easier for the team, as the team no longer needs to get permission to use a field, instead just having to tell club sports officials when they plan on using the field.

Knoell is now able to focus on the role of president, which she said has been one of the most enjoyable parts of their time at the college.

“Being on the quidditch team has been one of my most important things on campus for me since my freshman year and something that I’ve come back for, and so being the president has been so rewarding to be able to give back to the club that’s been such so important to me throughout the years here,” Knoell said.

Knoell said another part of the team returning to Emerson field is a better ability to schedule games and tournaments against other schools. Mitchell said that with the more reliable schedule this year, the team is already looking to start getting games scheduled, with a scrimmage against Cornell being something the team is trying to work out.

But on top of organizing on-field events, the team also wants to work on connecting off the field, through team bonding events. Mitchell said the team tries to get together regularly, building connections off the field and keeping everyone in touch with each other.

“We went to get Purity [ice cream] last week with a bunch of the new first-years. We’re trying to organize some things like a Harry Potter movie marathon,” Mitchell said. “Sometimes it’s just little things like getting lunch or dinner after practice, or during practice taking the time to relax and talk to each other when we’re getting a water break. In the past, we’ve done trips to see the new Fantastic Beasts movies, we’ve done little parties and get-togethers. For now, it’s just a matter of getting back into it and reorganizing all this stuff.”

These team bonding events have helped to cultivate an environment on the team that Knoell said is extremely friendly and close, something which she has enjoyed during their time with the team.

“The team is incredibly supportive,” Knoell said. “We have had a group chat on Facebook, and now we have a Discord server where everyone can interact with each other about quidditch and non-quidditch things. I’ve gotten so much support from the team. We hang out together, we do little study sessions, and we try to support each other in whatever way is needed. We’re just really good friends. It’s been a really warm and supportive environment. It’s wonderful.”

Despite only being on the team for a short time, House-Kelly said their experience with the team has been positive, even convincing their friends to join the team, saying that the team’s atmosphere has made their experience much more enjoyable.

“Honestly, I’ve had so much fun so far,” House-Kelly said. “I’ve dragged two [of] my friends to practice with me so they’re on the team now, and everyone is super nice. We’re all there just to have fun, so even if someone messes up it doesn’t really matter. We’re still going to put our best effort into it while still having fun and playing the game to the best of our abilities.”