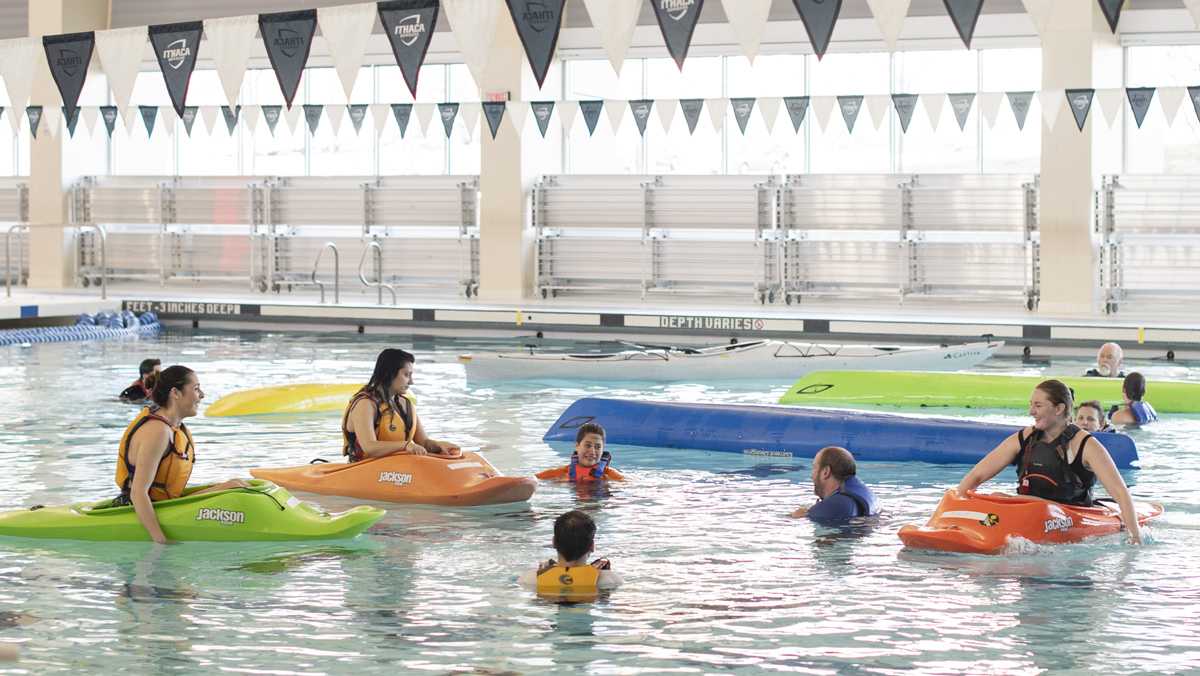 KRISTEN HARRISON/THE ITHACAN
Jennifer Miller and freshman Lexi Ryan helped to organize the World Tour Paddling Film Festival at the college. It will be held at 7 p.m. March 30 in the Park Auditorium.
By Emily Adams — Assistant Sports Editor
Published: March 26, 2019

Although the weather in Ithaca may be too unpredictable for much outdoor recreation during the winter and early spring, Ithaca College students will still be able to to get their fill of extreme water sports thanks to the Department of Recreation and Leisure Studies. The department is hosting the World Tour Paddling Film Festival at 7 p.m. March 30 in the Park Auditorium.

The World Tour Paddling Film Festival will showcase a series of short films that feature most major paddling sports. This includes canoeing, kayaking, whitewater rafting and stand-up paddleboarding, among others. Both professionals and amateurs make and submit films for consideration. This year, the Paddling Film Festival committee selected 26 films to be included in the festival, which is being hosted at over a hundred locations across the United States, Canada and Europe from February to November.

Jennifer Miller, an instructor in the Department of Recreation and Leisure Studies, has been involved in the world of paddle sports for many years. She owns her own paddling company in Ithaca called Paddle-N-More, which aims to increase paddle–sport participation in the Finger Lakes region. She believes that the film festival will help further this mission as well.

“The festival has been part of my culture for several years now,” Miller said. “It’s just fun to watch films of others doing some amazing things in paddle sports. As a paddle-sport professional, I am all about making what I do accessible to others who may feel they are unable to.”

Freshman Lexi Ryan is an Ithaca native and has worked with Miller at Paddle-N-More for the past two summers. She was certified this past summer to instruct paddleboarding and shares Miller’s passion for spreading awareness of the sport.

“Paddling is a very underrepresented field, and it is a big leisure activity, especially around Cayuga Lake,” Ryan said. “We think it’s important that people see that paddling is out there, and it’s a real business and a real sport. There’s a big industry for paddle sports.”

The preparations for the festival have been incorporated into Program Planning, a course that Miller teaches in the recreation and leisure studies department. She said the festival provides her students with a hands-on learning experience to promote and coordinate an event that relates to their future careers.

“My ultimate goal is to help build skills in our future recreation and leisure professionals by exposing them to other aspects of our profession that they may not necessarily get from the classroom,” Miller said. “The students worked on developing a promotional strategy that included hanging up flyers, posting on social media, sending out email invitations and other strategies.”

Junior Jillian Boylan, who is a member of the Program Planning class, said she believes the festival will have a positive impact on the recreation and leisure studies department as a whole.

“Ithaca is a pretty outdoorsy area, so I think there’s a lot of interest,” Boylan said. “The RLS department really isn’t known by very many students, so we hope that by putting on this film festival and talking a little bit about the department, more students will come and maybe join our department with a major or minor.”

Ryan said she believes the festival will provide an enriching experience for students beyond the recreation and leisure studies department as well.

“In the [Roy H. Park School of Communications], because there’s a lot of film students and documentary students, it’s big,” she said. “A lot of times the Park School doesn’t show sports documentaries or action stuff like this, so we’ve marketed it especially to that group of students. Plus, a lot of people think whitewater kayaking is the coolest thing ever. When we show what films are going to be at the festival, people are like, ‘I want to see that.’”

The proceeds from the festival’s ticket sales will go toward offsetting the costs from the American Canoe Association Adaptive Paddlesports Training. This was a workshop that instructed participants on how to integrate people with disabilities into paddling recreation activities. The training was held at the college March 23 and 24 and attended by Miller, as well as several students in the recreation and leisure studies department.

Tickets for the festival will be available for 15 dollars online or in the dining halls until the event. They can also be purchased at the door.