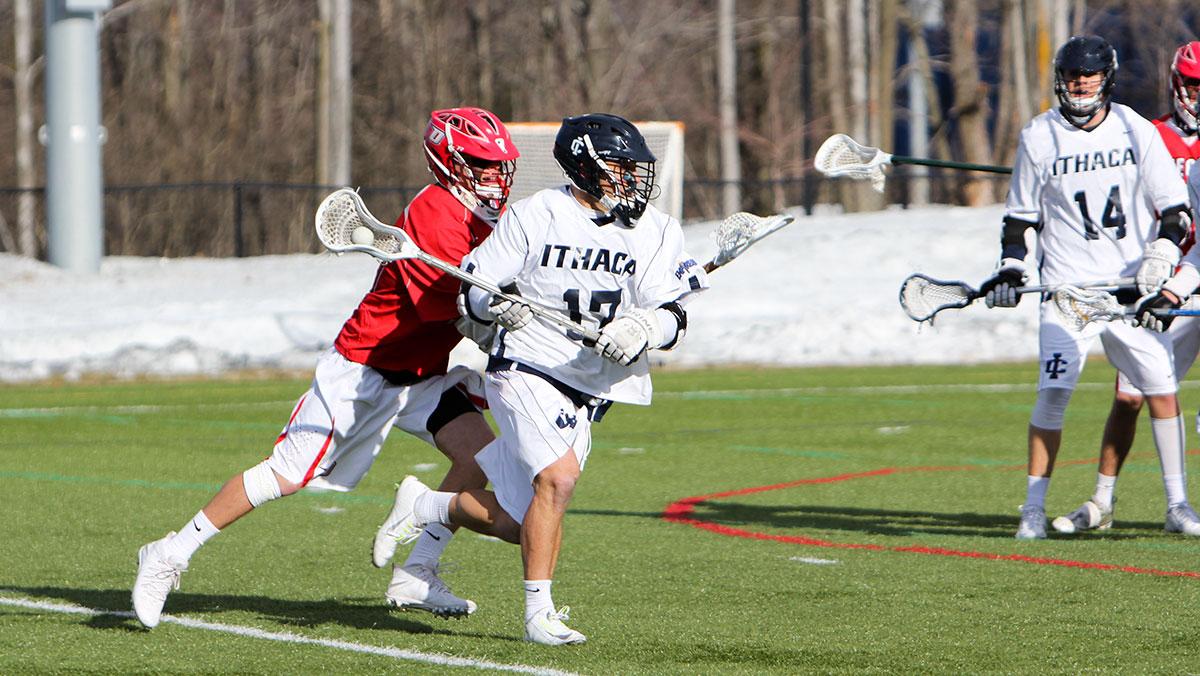 Caitie Ihrig/The Ithacan
From right, senior midfielder Matt Greenblatt beats a SUNY Oneonta defender while looking for an open teammate in the men’s lacrosse team’s 9–8 win over the Red Dragons on March 17.
By Ithacan Sports Staff — The Ithacan
Published: March 18, 2015

The baseball team posted a 2–5 record to kick off the regular season during its annual road trip to southern California.

After losing the first four games, the Bombers finally chalked one up in the win column with their 11–9 victory over Occidental College in 12 innings March 12. Junior designated hitter Zach Pidgeon went 4-for-6 with three runs scored and two doubles. The South Hill squad’s next win came against Spalding University on March 14. The Blue and Gold shut out the Golden Eagles 2–0. Senior catcher Cooper Belyea said the team used the trip as a learning experience.

“It’s tough getting out there and playing for the first time while those teams are already 15 games deep,” he said.

The team next squares off against the University of Rochester on March 21 in Rochester, New York.

The women’s basketball team concluded their 2014–15 season with a 71–66 loss to Bowdoin College on March 7 in the second round of the NCAA Tournament.

The Bombers kept the game close, never trailing by more than eight points and put up a fight in the end against the Polar Bears.

In the last game for the seniors, guards Samantha Klie and Ally Mnich had 14 and 11 points, respectively, and forward Francesca Cotrupe grabbed a team-high 11 rebounds.  The South Hill squad won its first round matchup against Mount St. Vincent College on March 6 to advance to the game against Bowdoin. The team defeated the Dolphins by a final score of 82–72 at Morrell Gymnasium in Brunswick, Maine.

The Blue and Gold finished the season with a 23–6 record.

At the Cortland meet, the Blue and Gold had a total score of 190.125, taking second to Cortland. Even though they lost, senior Valerie Cohen said the Bombers achieved an important goal.

“We reached our peak and the goal we had been chasing after the whole year: a 190 team total,” she said.

At the NCGA East Region Championships, the team placed fifth.

Freshman Rachel Lee qualified for nationals, scoring 9.675 on the beam, and will compete at the NCGA National Meet on March 27 and 28 in La Crosse, Wisconsin. The squad didn’t qualify as a team.

The men’s lacrosse trip kicked off the beginning of its spring break with a game against Houghton College in an Empire 8 matchup March 7.  The Bombers beat the Highlanders 22–5, with 11 players on the team scoring at least one goal.

Finally, on March 17, the team squeaked out a 9–8 victory over SUNY Oneonta.

The Bombers’ next game is scheduled for March 21 as they take on Elmira College at Higgins Stadium.

On March 7, the Bombers fell to nationally ranked York College in a close 9–7 battle. The Blue and Gold then traveled to Clermont, Florida, for their annual spring break trip. The Bombers lost against No. 1–ranked Gettysburg College, 12–6. On March 11, the Bombers suffered yet another heartbreaking loss, this time at the hands of Dickinson College, falling 10–9 despite a second-half comeback.

The Bombers then hosted SUNY Oneonta on March 18. Score was not available at time of print. The team will return to action on March 21 at St. John Fisher College.

The softball team got off to a slow start to the season, as the Bombers traveled to southern California and came back with 2–6 record.

The Bombers began their season with a double header against the University of La Verne. The South Hill squad took the first game, winning by a score of 4–2. In the second game of the doubleheader, the team fell 7–1.

The team bounced back the following day, splitting a double header against Chapman University. After losing the first game 3–1, the Bombers came back to beat Chapman 7–3.

The next two days, the Bombers lost four close games, losing 4–5 and 6–7 to the University of Redlands and falling to Claremont-Mudd-Scripps College 3–4 and 3–6.

The Bombers return to action against Rensselaer Polytechnic Institute on March 21.

The men’s tennis team finished with a 1–1–1 record during its spring-break trip to Hilton Head, South Carolina.

The South Hill squad was originally set to play four opponents, but Carroll University went to the wrong venue and had to bow out of its match with the Bombers.

Instead, the team began match play against Rhodes College, tying the with Lynx 4–4.  The South Hill squad then topped Bloomsburg University, 6–3. The Bombers ended their road trip falling to Kutztown University, 5–4.

Junior Chris Hayes said despite the even split, he felt the team performed very well and spent quality bonding time together.

“Team morale is at an all-time high right now as we head into conference play,” Hayes said.

The Bombers are back in action this weekend as they square off with Houghton College on March 21.

The women’s track and field team sent four of its athletes to compete in the 2015 NCAA Division III Indoor Championship in Winston-Salem, North Carolina. The men’s team did not qualify for the national meet.

The wrestling team traveled to the Giant Center in Hershey, Pennsylvania, to compete in the NCAA Division III Wrestling Championships on March 13–14.

Senior Alex Gomez placed fourth in the nation at 133 pounds and senior Kevin Collins was sixth at 157 pounds. Both wrestlers were named All-Americans in recognition of their senior year campaigns. They are the 106th and 107th All-Americans in the program, respectively.

Other wrestlers who qualified for and competed in the championships were junior 149-pounder Eamonn Gaffney, sophomore 125-pounder Jimmy Kaishian and freshman 165-pounder Nick Velez. All bowed out on the first day of the event.

The South Hill squad finished the season with an 11–2 record.