Rugby welcomes newcomers with or without experience 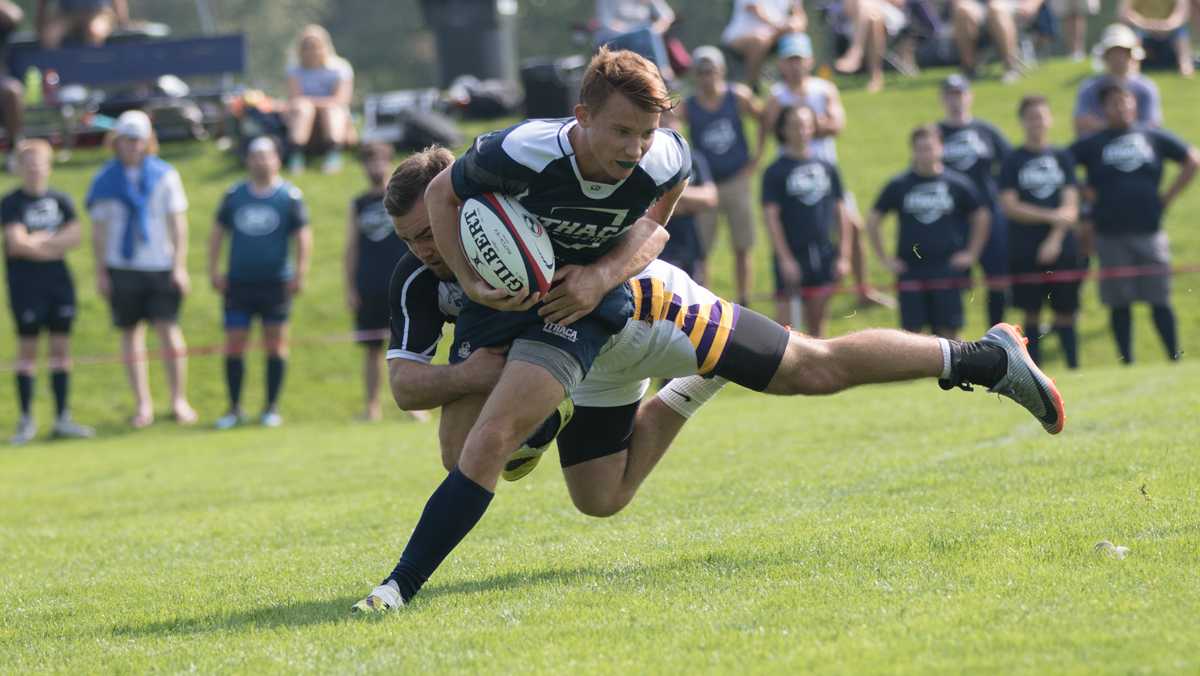 Now in her sophomore year, Emilia Hull was looking for a change of pace from playing on the Ultimate Frisbee team. She turned to rugby, a sport she had never played before.

Throughout the years at Ithaca College, men’s and women’s rugby have become two of the most popular club sports teams the school has to offer. The men’s team started in 1976 and ran through 1994. It was re-established in 2010. The women’s team started 25 years ago. Since then, the rugby teams have grown tremendously. This fast–paced, high-intensity sport normally draws 45 to 55 students for the men’s team and 35 for the women’s team to the sign–up table in the fall each year.

Because of how competitive and challenging rugby is, there is a wide range of training that goes into learning and mastering the sport. This includes physical fitness training as well as drills that help the rookies understand the rules.

Senior women’s rugby president, 8-man Ashley Cohen, said the team does a lot of tackling drills to ensure the rookies do not get hurt.

“We teach them how to tackle separately step-by-step,” Cohen said. “Approach the girl, get low, back straight and shoulders locked to keep your neck strong so you don’t get a concussion. Things like that. Specifically, things they can catch onto right away — muscle memory — and we will never put them in a game if we don’t think they are comfortable.”

There are a lot of misconceptions about rugby. Cohen said this comes from the belief that women should not hit or be aggressive. This has led to the women’s sport being less popular, in general, as only two women on the team have previous experience playing the sport.

Since the majority of the rookies have no experience prior to playing rugby at the college, they must go through a process of learning specifically how to tackle and be aggressive on the field.

“I had zero knowledge of rugby before I started,” Hull said. “The hardest part would be just getting a good grasp of the game because I am a new player starting from scratch. It isn’t necessarily the physical part, it is the mental; you have to say, ‘OK, I am going to hit this person as hard as I can’ so it is a different mindset.”

To get better at playing the sport, the rookies will play in slower-paced B-side games against other rookies to make sure that they have proper form. The rookies play B-side, whereas the players who are certified play in A-side games.

“I have had one B-side game,” Hull said. “When you’re a rookie, you play in B-side games. It is like practicing — the referee goes a little slower, and they are teaching you form, so it is all safe. I have only played one of them, but I do feel a lot more confident going into this next weekend on Saturday.”

Although the rookies are gaining confidence and experience, it is a time-consuming process. Women’s head coach Libi Demarest said the hardest part of training the rookies is getting them used to being aggressive.

“The rookies will apologize up and down over every little thing they do it,” Demarest said. “It is really hard to get them into the habit of feeling comfortable in using their bodies in a different way and to know they can be aggressive and physical and that it’s actually awarded in rugby.”

There are already five rookies certified to play in competition. The women don’t have to take any tests to prove they can play but have to pay a due of $46 to USA Rugby. This fee covers one year of liability and accident insurance in case something happens during practice, games or tournaments.

So far, Hull said she has enjoyed her experiences on the team because of the team bonding activities that the executive board plans.

“Rugby has been really awesome,” Hull said. “They’re a really great group of women who are really big on communication and team bonding and making sure you feel like you are a part of the team, which is really awesome.”

The men’s team also faces many challenges when learning the sport and training the rookies.

When playing rugby, senior captain and fullback Tom Garris said that he finds that athletes who have previously played soccer or football learn the game easier and faster.

The main focus of all three sports is to get the ball to the other side of the field while passing, throwing or kicking the ball. Being comfortable tackling other members by previously playing football correlates to tackling in rugby. The athleticism and foot skills that are developed in soccer help when kicking the ball down the field or kicking a field goal.

Getting on-the-field experience, junior captain Drew Mele said, is the most important part of learning the game. Part of this is playing as many games as possible at full pace with tackling.

“The hardest part about rugby is knowing what to do in the chaos of the game,” Mele said. “You can study formations and the ins and outs of the game as much as you like, but to truly learn the game, you have to play it as much as possible.”

Garris said the rookies have been training hard to prepare for the season and transitioning to the A–team.

“A lot of guys have inexperience in the sport, and they have never watched or played a game,” Garris said. “We joke with the rookies, and I say, ‘I still don’t even know what I am doing,’ so it takes time, but they get it usually by the end of their sophomore year.”

While there are many physical and mental challenges when learning the sport, men’s head coach Annemarie Farrell has a completely different view of what she believes is the most challenging aspect.

Farrell has been coaching rugby for 15 years and said she is still trying to break the stigma that rugby is a club for frat boys.

“I think we are an interesting case because we started nine years ago after being off-campus for 16 years, so the people who restarted this club are more interested in creating a varsity mindset and detaching themselves from the social stigma,” Farrell said. “I think the hardest part of being a part of rugby is the social stigma that comes with it.”

Farrell said the team is overcoming the social stigma by getting involved around campus and training as if they were a varsity sport. She said she believes that if the team practiced more, she would no longer have athletes who are involved in activities outside of rugby.

“I wouldn’t add a lot of practice time to what we do because rugby isn’t what these athletes are,” Farrell said. “They are so much more than that, so I think six hours a week is probably the sweet spot right now for our training.”

Hull said the captains of the women’s team set up team events for the rookies to make sure that all the players feel included.

“I am hoping to get a lot of really close friends that I can hang with throughout the years, and some gnarly bruises,” Hull said. “Also, confidence in myself and a lot of strength both physically and mentally because it takes a lot to play this sport.”

Sports One on One: Senior rugby player Vincent Manta

Sports One on One: Junior rugby player Ashley Cohen

Rugby sevens team qualifies for nationals for the first time