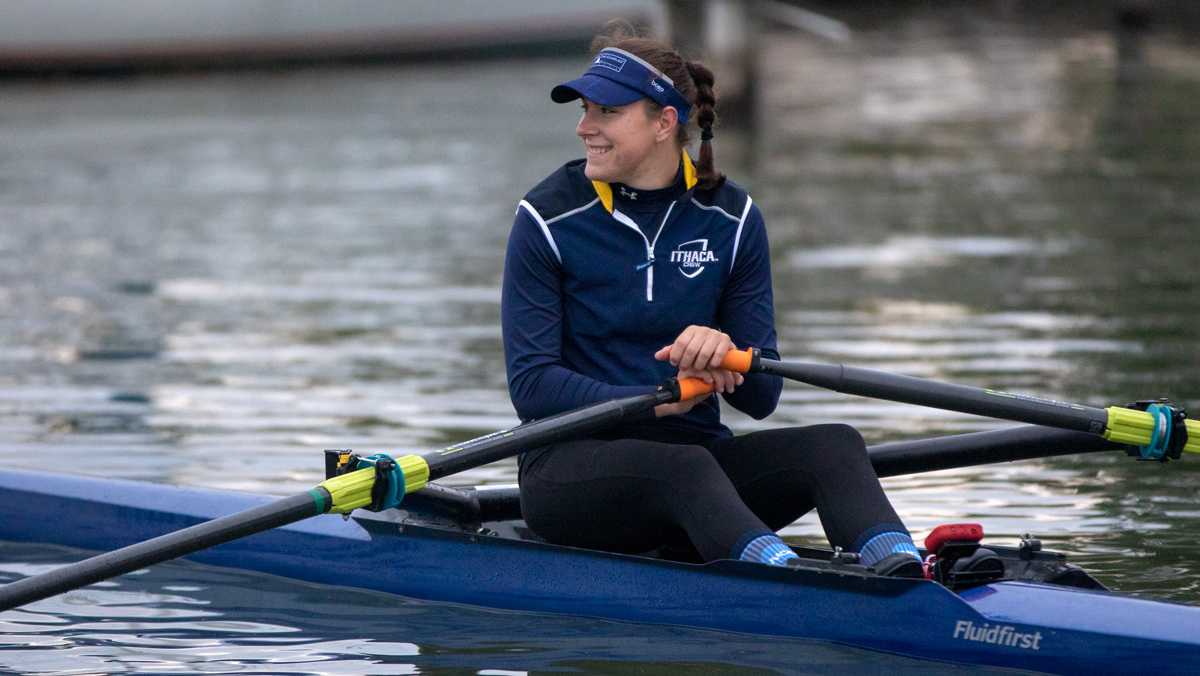 ELIAS OLSEN/THE ITHACAN
Brija is planning on competing for a high-performance club team when her collegiate career is over. She is looking at clubs that are located in various parts of the Northeast.
By Jack Murray — Assistant Sports Editor
Published: October 31, 2018

When graduate student sculler Savannah Brija begins her practices, all she can think about is being faster than her teammates.

“I always have a racing, competitive mindset,” Brija said. “I am always thinking ‘I need to do what I can to beat the person next to me,’ not just to make myself better but to make them better as well. The whole point of rowing is competing and racing, and if I’m not doing that every day then, I am not really preparing for
the races.”

Brija, who originally attended Ithaca College to play on the soccer team, joined the crew team during the spring of her freshman year. She said she enjoyed the sport so much that she decided to focus on the rowing program and started to see success immediately — she is now a consistent top finisher. Her experiences with the program have led her to consider continuing to compete after graduation, possibly with the U.S. National Rowing Team, or at least an elite club team.

Brija’s numerous accolades for the rowing program include winning the 2018–19 Small Boat Challenge Women’s Collegiate Champion Award and being named to the 2017–18 Second Team Collegiate Rowing Coaches Association All-American. She was also a league honoree in her first season in the Liberty League Conference, taking home the 2017–18 All-Liberty League First Team and 2017–18 Liberty League Crew of the Year. In addition to this, she is a fifth-year physical therapy student who has been named to three all-academic teams and was a recipient of the 2018 Collegiate Rowing Coaches Association Scholar Athlete Award.

Brija has been on the sculling team since her sophomore year. She said that this is unusual because traditionally, the team consists of upperclassmen. She also said that she finds sculling compelling because it requires more technique than rowing does.

“I think it’s more fun,” Brija said. “It’s more individualized and based on technical skill. You become a better rower if you know how to scull. I was really interested in doing that because, as a sophomore, I wanted to do everything I can, and now it is part of what I do.”

The sculling team competes primarily in the fall, while the crew team participates mostly during the spring. The biggest differences between the two sports are the boat and the oars. In sculling, each person has two oars, and the boats either hold one person, two people or four people. In crew, they only use one oar, and the boats typically have four people or eight people. While Brija prefers the individuality found in sculling, she said the crew season is more intense.

Beth Greene, assistant coach for both the sculling and the women’s crew teams, believes that Brija’s enthusiasm toward the sport sets an example for her younger teammates.

“She is a great leader,” Greene said. “She has a very positive energy that when she first got onto the team she intimidated some of her older peers, almost because they didn’t have that outward positivity. She is very intense in herself and her desire to be competitive, but she also has genuine excitement for her teammates
having success.”

Greene also said that despite Brija’s deep-rooted desire to win, she has never let her intensity get in the way of developing strong relationships and bonds with her teammates. Despite Brija’s success, Greene said she never carries herself as higher than her teammates.

“She has never gotten to a place where she thinks she is better than her teammates,” Greene said. “The fact that she can be so welcoming to others while being so competitive herself makes her exceptional.”

While the time commitment for both her studies and her sport has been difficult, it has not led her to want to give up sculling and rowing. She said that she intends on applying to various

high-performance teams after her collegiate career ends. Some of the programs are located in areas such as Boston, Philadelphia, Oklahoma City and Saratoga Springs, New York. After graduation, she said that she would like to continue up the ranks, but job location and time availability will be major factors.

Greta O’Hara, who is a co-captain on both teams with Brija, said she believes that Brija has potential to find success in the world of elite rowing.

“If she really commits to her plan to train I think she can go really far,” O’Hara said. “It all depends on the coaches she gets and the teams she joins. I know that whatever she does, she will be successful at.”

Brija has not only found her passion for sculling and rowing; she also loves her physical therapy work. She said she worked at an outpatient physical therapy clinic in Florida this past summer, which reaffirmed her love of working in the profession, especially when she could work with those with athletic backgrounds.

“I really want to work with athletes,” Brija said. “Knowing how hard it is going to be for them is something I can work with.”

While sculling and rowing have become her primary sports, she said that she does not want to only work with these sports.

While Brija’s commitment to both her sport and field are points of pride for her, they are not without their challenges. Brija is in a six-year doctorate program for physical therapy but is currently on pace to finish in five years, having already finished her undergraduate portion. She said that scheduling classes becomes difficult, as she must coordinate lab sessions around her practice times. In addition to class scheduling, the constant demand of work and practice and more work has led her to become disciplined.

“I study with every bit of free time I have,” Brija said. “I will get to the boathouse, and sometimes I will bike and study at the same time. Then I will have practice and then go home and eat dinner and then study the rest of the night.”

O’Hara said that Brija possesses the drive that is needed to find success in the sport, and her ability to motivate her teammates is remarkable.

“She brings people together and gets them to work really hard,” O’Hara said. “She is able to get the younger players excited about rowing.”

Greene believes having an athlete like Brija adds a different dimension to a team as she allows her teammate to strive to accomplish what they are capable of.

“When you see someone relatable doing something exceptional, there is more of a sense that it is possible,” Greene said. “Pulling a certain time, or having a certain time improvement and drive isn’t just for Olympians who aren’t actually human. I think when you see it as a real person and a peer it makes it easier to see yourself in that position.”

Brija said that no matter where the world of sculling and rowing takes her, she hopes it stays a part of her life for a very long time.

“Even if I can’t stay at a high level, it is definitely something I can do for the rest of my life,” Brija said.