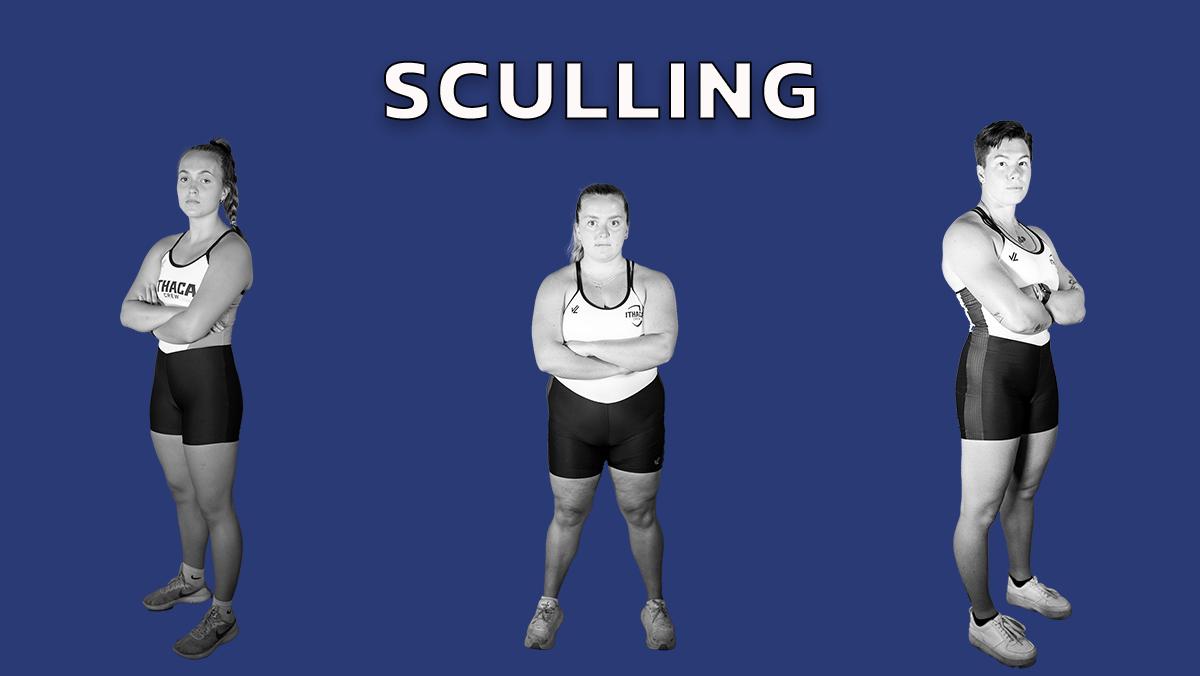 Nolan Saunders/The Ithacan
From left, seniors Erika Elcsisin, Brenna Hanratty and Taylor Volmrich of the Ithaca College sculling team. With such a short season, the team is looking to make a splash in the fall.
By Emma Kersting — Staff Writer
Published: August 31, 2022

The Ithaca College sculling team is preparing for its fall season like any other, with high hopes and goals for a successful season.

Senior captains Taylor Volmrich, Erika Elcsisin and Brenna Hanratty have each trained for the upcoming season in different ways, from staying in shape at home to joining summer rowing teams. All three, along with the rest of the team, were also a part of the women’s crew team last spring.

Volmrich said the lack of structure over the summer makes training difficult. She said the team trains between semesters by keeping in shape however they can, but there are no specific goals.

“Summer is hard because it’s a lot of training on your own,” Volmrich said. “As long as you’re doing something, that’s kind of our goal for the summer, to just keep everyone in shape.”

This season is the first for Volmrich, Elcsisin and Hanratty as captains. Hanratty, along with the other captains, said she is looking forward to the leadership role.

“It’s really rewarding,” Hanratty said. “I want to do the best I can for our team, I care a lot about my teammates, … making sure they know if they need anything that we’re here and willing to help them.”

The Fall 2021 season was different for the sculling team due to restrictions from the COVID-19 pandemic. According to Elcsisin, there were fewer colleges able to compete because of their small team sizes.

“With everything that happened with [COVID-19], a lot of athletes stepped away from sports,” Elcsisin said. “So that was definitely a different experience than what we’ve had in previous years.”

For Elcsisin, this season will only be her second on the sculling team. After joining the crew team in the spring of 2020 as a walk-on, Elcsisin’s season was quickly interrupted by the COVID-19 pandemic. Then, because of the remote Fall 2020 semester, there were no athletic competitions.

“We came back last fall and we did sculling, it was really fun,” Elcsisin said. “I was so happy to learn this new aspect of the sport of crew.”

For all three athletes, a primary goal for the season is to make it to the Head of the Charles Regatta, where teams at multiple levels, from high school teams to college teams of all divisions, compete every October in the Charles River in Massachusetts.

“That is a crazy race to go to and experience,” Volmrich said. “There’s like thousands of people watching you and it’s really intense. … It’s a really technical course.”

If Hanratty makes it to the Head of the Charles, it will not be her first time at the regatta, as she took part in it during high school.

“It kind of gives you a perspective of how much a rowing world there is that you don’t really see if you’re on a small team,”Hanratty said.

While the team has automatic entry from last year, only a certain number of team members are able to compete. Entry to Head of the Charles is done by a lottery drawing. For the Collegiate Eights event, the top half of the ranking from the previous year gets automatic entry. The Bombers were seventh last fall out of 40 teams, well within the top half.

The college’s sculling team brings two eights, or boats of eight rowers, meaning only 16 athletes will get the chance to compete. Coming into the season, Robinson said they have 22 athletes on the varsity team, making this year’s sculling team the largest ever. In the past, she said, the team has ranged between 10 and 16 athletes, but the larger squad allows for more athletes in small boats.

Performing well in the Head of the Charles is a goal for head coach Becky Robinson ’88 as well. Last fall, the Bombers finished seventh at the regatta and went on to place fourth overall at the end of the season.

“My hope is we start higher up than seventh and that we still see the same amount of growth,” Robinson said. “Instead of going from seventh to fourth, maybe we go from fifth to second or first.”

Because rowing is not a typical high school sport, the rowing teams dedicate a lot of time in the first weeks after first-years arrive on campus recruiting new members.

“I know a lot of people don’t really know what rowing is, coming into college, so we’re just trying to get the word out as much as we can and get people to come to our info sessions,” Hanratty said.

Volmrich also said that the team’s recruiting process involves standing outside of first-year check-in and that being present around campus before classes starts to make an impression on the students.

“We start recruiting when all the freshmen are on campus and we go find them,” Volmrich said. “It’s one of the things our team is the best at, we just stand there and hand out flyers. We say, ‘you should row!’”

For Elcsisin, one of the draws to the rowing program at the college was the coaching staff.

“During orientation, I was able to meet one of the coaches, kind of just out of nowhere,” Elcsisin said. “They were so nice and welcoming and they said ‘come to our information meeting if you like sports. We would love new people.’”

Other members of the team have an appreciation for the coaches of the college’s sculling team as well.

“I really do think that Becky and Beth [Greene, assistant head coach] care about us as athletes and people,” Volmrich said. “Beth and Becky certainly come together to try and provide the best experience that they can for everyone at all levels.”

The college’s sculling team will have their first meet of the season Sept. 25 in the Cayuga Sprints at the Cayuga Inlet.