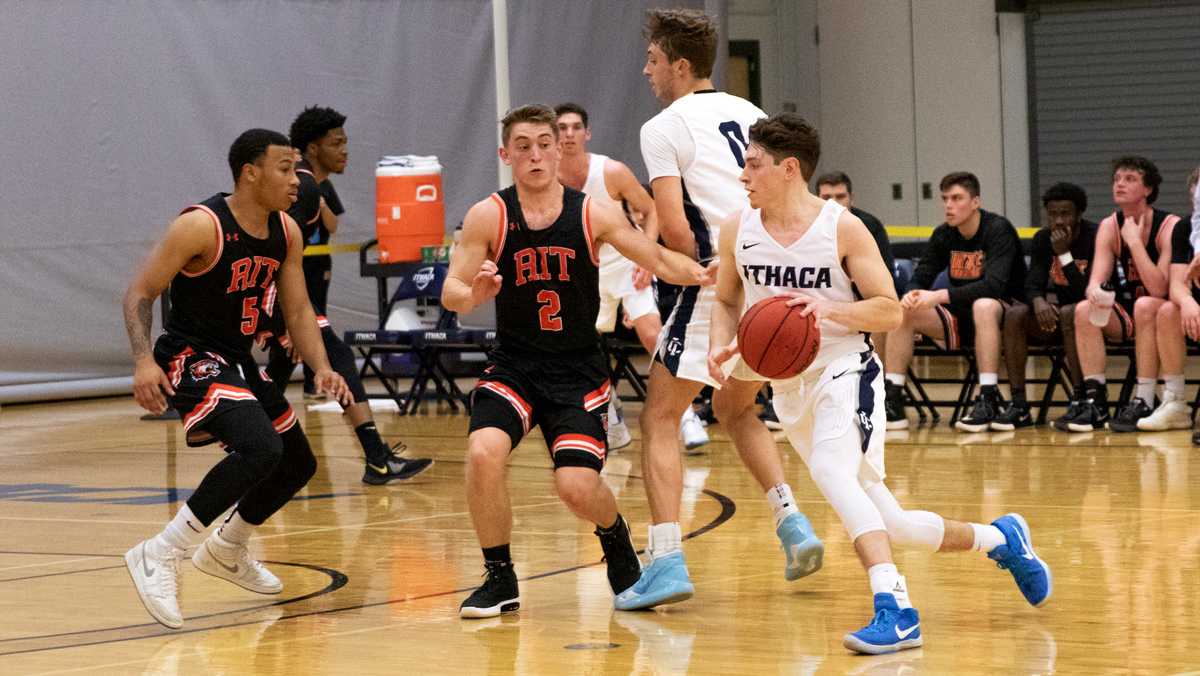 Senior guard Riley Thompson and the Ithaca College men’s basketball team are having a hot start to the season. The team’s overall record is 11–4 and 7–2 in the Liberty League conference. The Bombers lead the Liberty League in team scoring with an average of 84.1 points per game.

Thompson also leads the Liberty League in individual points per game at 20. He scored a career–high of 36 points as part of a 101–87 win over Montclair State University on Jan. 5.

Staff writer Max O’Neill sat down with Thompson to discuss his offensive strengths and the team’s success so far this season.

Max O’Neill: You scored 36 points against Montclair State. What allowed you to play so well?

Riley Thompson: Honestly, it was a very high–paced game. We came out a little disappointed as a team with how we performed [against Moravian College] the game before. Shots started falling early, and my guys found me. I didn’t think it was one of those games where I had to force anything or try super hard to score. It was just one where the points just came, playing in the offense, guys moving the ball, and it worked out well for myself and the team.

MO: The team has had a good start to the season so far. How do you guys continue this as conference play really starts to ramp up in the coming weeks?

RT: I really think we’ve committed to our identity, which is playing very fast and together and moving the ball. I think we are really the most skilled team in the league in terms of passing, shooting and playmaking. We don’t just have one or two guys on the team that can do that type of stuff. Everyone can do that. It makes it very easy, and we have committed to playing with each other and getting better every day. I think we’ll like where we are at the end of league play.

MO: You are playing really well individually this season, averaging 19.8 points per game. How does it feel to see all the work you did in the offseason paying off?

RT: It definitely feels nice. Every offseason you go back to the drawing board, and it’s good to see some of that work paying off from an individual perspective. It’s definitely rewarding. Even so, it’s occurring in a winning environment where the team plays well together. Anybody can put up points on a team that’s not that good and doesn’t play well together. It means a lot to be able to succeed within a strong team atmosphere.

MO: With this being your last year, how much pressure do you feel to continue this winning run and try to make a Liberty League playoff run?

RT: There’s definitely some pressure. You realize it’s your last year, but at the end of the day, I have faith in our team, what we’ve done and where we’re at that if we keep doing things how we’re supposed to do, it’s going to end well. You can’t worry about how it’s going to end. You have to go out there every day and take care of the task at hand, then hopefully when you look up towards the end of the year, you have a Liberty League championship to look back from.

MO: You lead the league in scoring, both as a team and individually. Knowing some of the offensive struggles of past years, how does this feel?

RT: I think it’s just a testament of how far we’ve come since [senior guard] Sebastian [Alderete] and I were freshmen. We have really become an offensive juggernaut, and it’s a dedication that each player puts in. You have to go and work on your game as an individual. Guys have their own work ethic. They want to get better outside of practice. They want to go out for our team’s success. I have always worked hard. … I build on every game, every season until I’m the best player I can be.