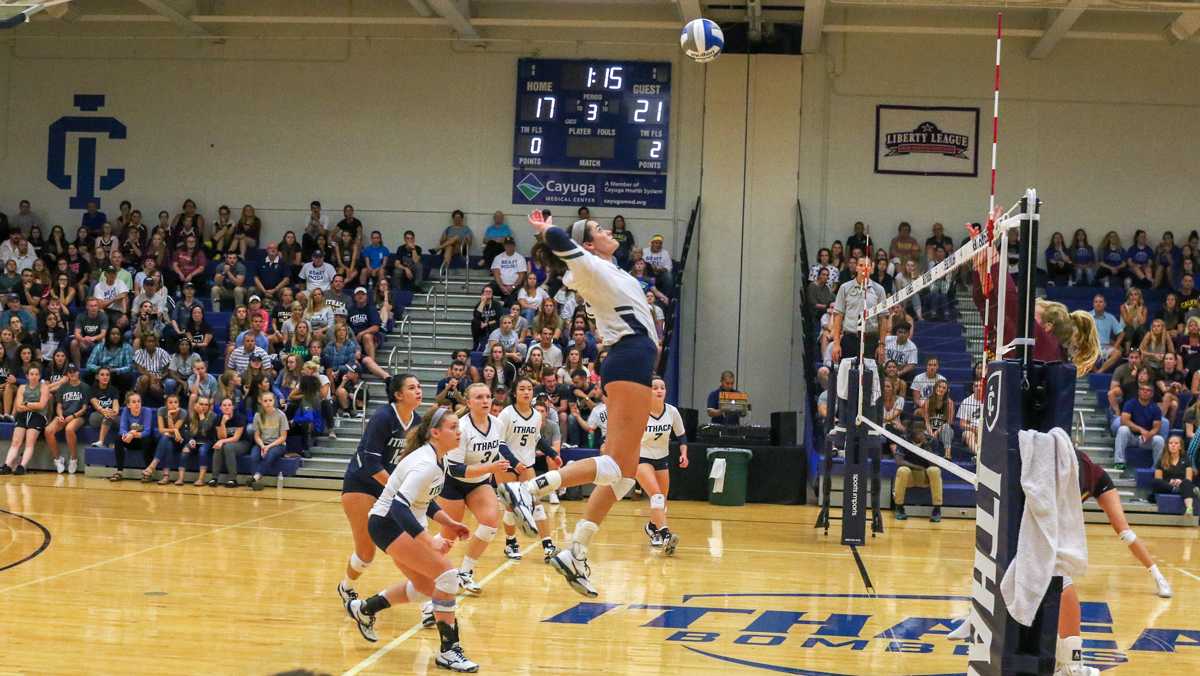 ELIAS OLSEN/THE ITHACAN
Senior middle hitter Amanda Cerruti gets ready to spike the ball back over the net during the Blue and Gold’s 3–0 loss against Calvin College on Aug. 31 at Ben Light Gymnasium.
By Shehanee Fernando — Contributing Writer
Published: September 24, 2018

The Ithaca College volleyball team is currently 5–5 after facing four ranked teams this season, and it is doing it without one of its best senior players.

Senior middle hitter Amanda Cerruti suffered a fractured second metatarsal in her foot and is spending more time on the bench than playing on the court.

Contributing Writer Shehanee Fernando spoke with Cerruti about how the team will be affected in her absence, how the team is competing and how her role has changed this year.

Shehanee Fernando: How does it feel to be competing against such high-level competition?

Amanda Cerruti: It feels awesome. As a senior, I have watched the program grow so rapidly over the years, and to see how the level of competition has even grown higher and higher is amazing — it’s such great feeling. Especially as a
competitive person and team, we love the game. To play teams at a very high competitive level— it is really fulfilling.

SF: At this point in the season, how do you feel about the team’s chances for the playoffs?

AC: The team this year, there is so much potential, and we are pretty evenly split with underclassmen and upperclassmen. This is great because we are showing the underclassmen the ropes, and there is such a high level of leadership on this team. So, it is easy for us to stay calm and collected and have a clear set goal that we want. So, at this point of the season, we feel good about our chances. Obviously, we will have to work hard and not get complacent and work toward our goal.

SF: What is your impression of the current women and the team?

AC: The great thing about Ithaca volleyball that is we have been so lucky with everybody we have on the team. We get along so well, which I think what contributes to our success. If you have a team that doesn’t work well, it’s going to show on the court. And something about Ithaca is that we always have a team that clicks and it definitely shows on the court. We are one big, happy family. Being with this group of girls, we make everything fun.

SF: How do you fulfill your role as a senior?

AC: So, my role has changed a bit because I got hurt so early in the season. So, all I can really do is be a teammate and be supportive. My role is being the person and that role model on the side of the court. I tell my teammates what I see because I can’t be out there with them and cheering them on and giving them advice. Since I can’t play and I’m not sure when I will be back, I am pulling the underclassmen along and showing them the ropes and making sure we are doing what we are supposed to do. I’m there to give them advice and pointers on what to do better.

SF: What is something you think the team has improved on from last season to this season?

AC: It is hard to say because every year we get new players, and we always start out with a clean slate. For the coaching staff, we got a new assistant coach, Kelsey Klopfer, and graduate assistant, Rachel Ford. It’s funny because we played against Rachel last year when she was from Berry College, and now she’s our coach. It’s good to have her since we are expanding our schedule, and we are playing a lot of teams outside our region, so she brings in information from when she played. And Kelsey — she played at Oneonta College. What is really great about her is that she was a setter when she was in college. In the past few years, we never really had a coach that was a setter, so the setter on the team really enjoys that.

SF: How do you think, as a player, you have improved over the course of your collegiate career?

AC: When I first came in like a freshman, I was like this quiet, awkward, this noodly looking player. Mental game was a huge thing for me when I first started. I’ve kind of learned how to grasp that, how to keep calm and stay on a steady path instead not freak out on the court. During my freshman year, there was only one senior and one junior, and there was only 12 people on the team. In the past couple of years, the program has grown, and we’ve grown with it.

AC: Family, because we support each other, and this wouldn’t work if we didn’t trust each other. Passion because we are all playing a sport that we love and enjoy playing. There is really no words that can do Ithaca volleyball justice.