Senior gymnast flips over insecurities to shine for Bombers 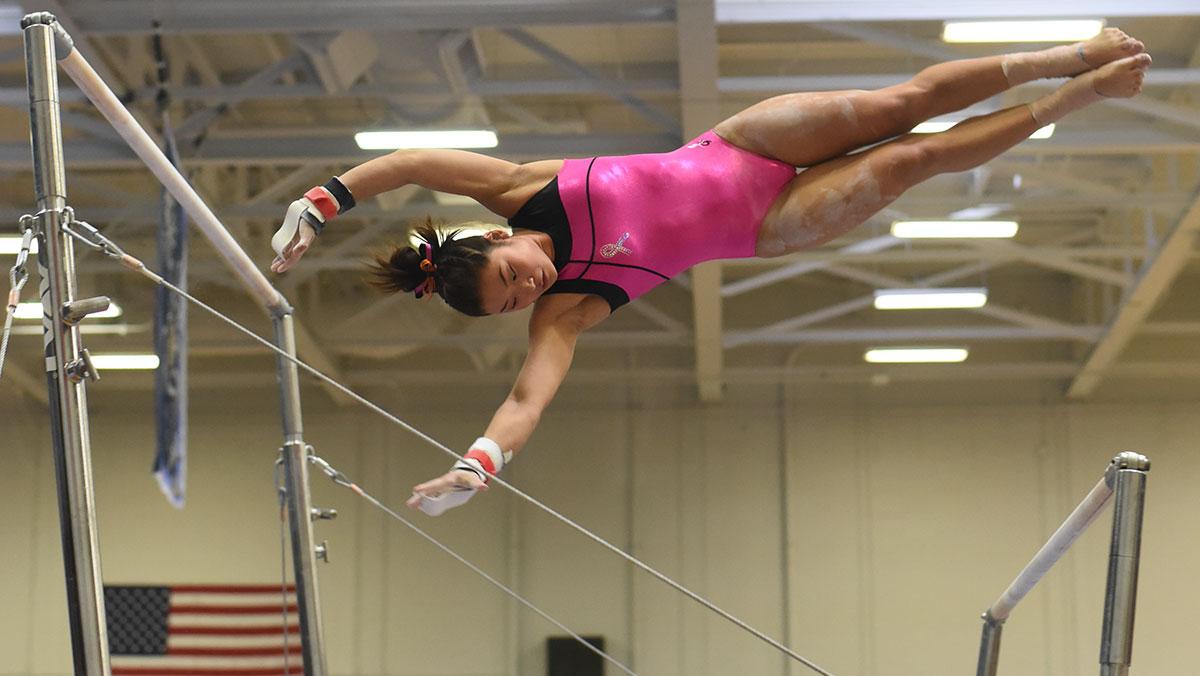 JENNIFER WILLIAMS/THE ITHACAN
Senior Megan Harrington competes on the uneven bars Feb. 28 at the Harriet Marranca Memorial Invitational. She placed 12th on the event with a score of 9.275.
By Sarah Resman — Contributing Writer
Published: February 29, 2016

Standing on the balance beam during her second meet as a Bomber Jan. 20, 2013, Megan Harrington knew she had a great week of practice, but her fear of messing up weighed down on her. Now three years later, as a senior, Harrington has overcome the mental blocks that plagued her in the past and is currently in the midst of an amazing season.

When Harrington first arrived at Ithaca College, head coach Rick Suddaby said her lack of consistency sometimes held her back. Her scores on the floor exercise freshman year varied from 7.85, which she got Jan. 20, 2013, against Southern Connecticut University, to 9.5, which she got March 10, 2013, at the Eastern College Athletic Conference Championship.

“She was always talented as a freshman and sophomore, but she would come in and out of confidence,” Suddaby said.

Harrington began doing gymnastics at a young age after watching from an outside perspective.

“I started gymnastics when I was 3,” Harrington said. “My older brother did it, and I wanted to do it too, so my parents put me in.”

Harrington grew up in Syracuse, New York, where she trained at the Central New York Gym Centre. In high school, she competed on the gymnastics team at Fayetteville-Manlius High School during her sophomore, junior and senior years.

When it came time to start her college search, Harrington said gymnastics was not her number-one priority.

“I was applying to schools, and if they had gymnastics, I was like, ‘Oh, maybe I’ll do it,’” Harrington said.

She met with Suddaby only once before committing to the college when he attended her regional meet during her senior year. This later landed her a spot as a Bomber on the gymnastics team.

“Competing at such a high level was new for me, and having a new coach and new teammates was different,” Harrington said.

Suddaby said he worked with Harrington one-on-one in order to build her confidence but that she took matters into her own hands from there.

“Over time, she has really come to own her sport, and now she trusts it,” Suddaby said. “It gives her a lot of pride in what she does because it’s not me making her good — it’s her making her good.”

So far, this season has brought Harrington much success. She scored a personal best 9.625 on the floor to tie for first place at the Bombers’ meet against Springfield College on Feb. 6. Her all-around performance earned her the East Region’s Co-Specialist of the Week honor from the National Collegiate Gymnastics Association. She was also named one of the college’s Athletes of the Week for the week of Feb. 8.

Suddaby said Harrington had a great meet and she earned the recognition.

“She just nailed her events,” Suddaby said. “She was confident enough to compete at a real high level.”

Harrington’s earliest accomplishment as a Bomber was earning an All-American title during her sophomore year. She placed seventh at the National Collegiate Gymnastic Championship as an all-around gymnast, meaning she competed in all four events: bars, balance beam, vault and floor.

Harrington’s consistent improvement over the course of four years was not only something noted by her and her coach, but also by her teammates. Graduate student and co-captain Valerie Cohen said it was an inspiration to watch Harrington improve.

“Sometimes when you have those things like fears and anxiety, it’s hard to see that you’re going to get over them, but just having a living example of that in front of you is inspiring,” Cohen said.

Cohen said Harrington now not only serves as a teammate, but also as a great leader, friend and inspiration for the team as a whole.

“Meg has a very distinct personality. She’s one of those light-hearted, goofy, silly kinds of people,” Cohen said.

Harrington said she credits the team for helping her get through her insecurities.

“Just having my teammates as a support system to tell me that they believe in me, even if I didn’t, really helped me boost my confidence because I knew that if they saw the potential I had, then I knew I could do it eventually,” Harrington said.