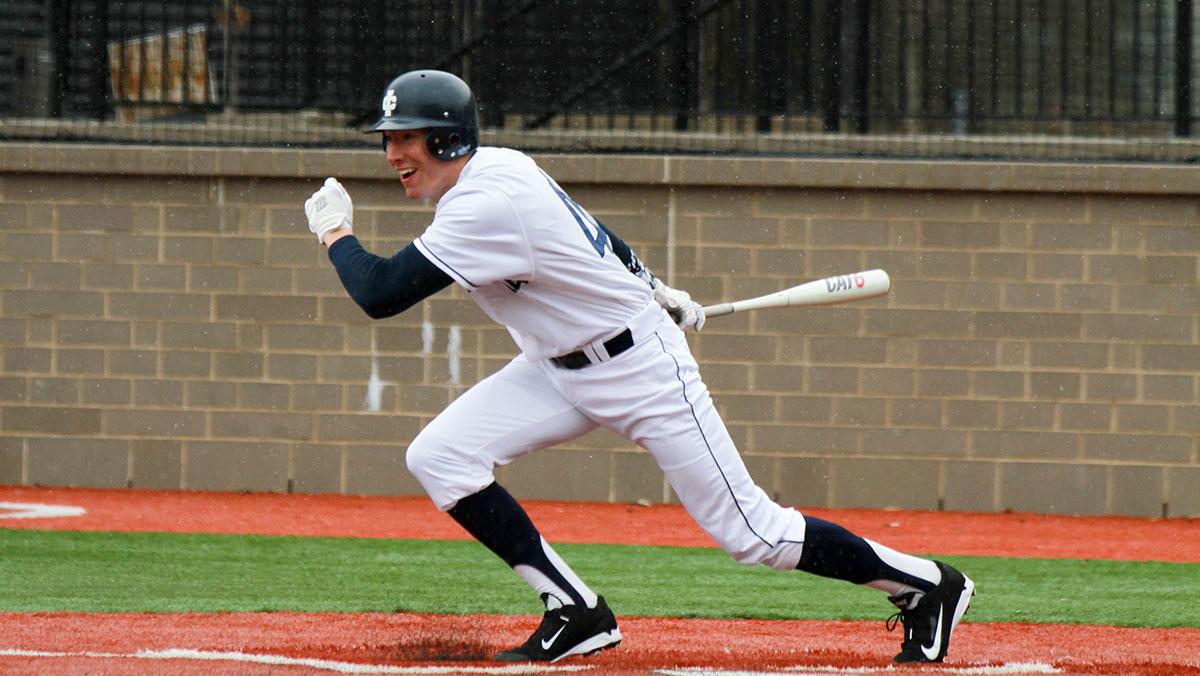 In the spring, senior linebacker Zach Pidgeon can be found on the baseball diamond. His 6-foot-5-inch, 230-pound beanstalk-of-a-frame towers over all in the left-handed batter’s box.

He glares 60 feet and 6 inches straightaway into the heart of the pitcher, awaiting the next pitch, which he can send screaming and soaring over the outfielders’ heads.

In the meantime, Pidgeon spends his brisk autumn afternoons on the gridiron, where he has traded in his cap and bat for a helmet and pads.

Pidgeon was recruited out of high school for both the baseball and football teams by Ithaca College, as well as by SUNY Brockport and SUNY Cortland strictly for baseball. When he committed to the college, Pidgeon ultimately chose to play baseball over football, and he led his team to a state championship during his senior year.

Pidgeon’s success as a ballplayer advanced through college. After tearing his ulnar collateral ligament in his throwing arm in 2013, Pidgeon made the switch from pitcher to designated hitter last season, where he earned Second Team Empire 8 All-Conference after batting .397.

However, the urge to play football still lurked inside of him. By the end of last spring, Pidgeon said he approached baseball head coach George Valesente about the notion of playing football this fall.

“The past couple years, I really missed playing football,” Pidgeon said. “Every August football comes around, and I just really wanted to play … so I went up to [Valesente], shot the idea by him, and he put in a good word for me.” 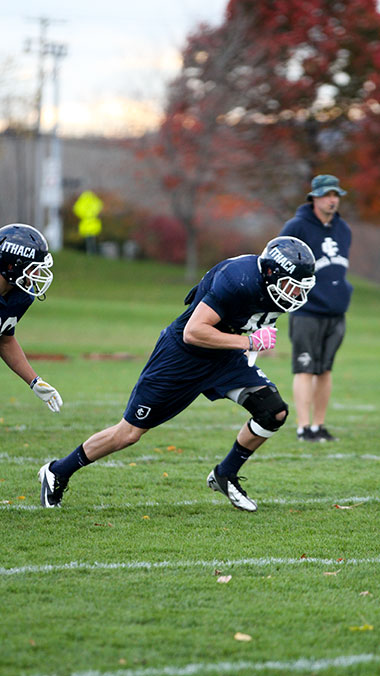 Piidgeon, a linebacker on the football team, runs a drill during the team’s practice Oct. 29 at the college. FERNANDO FERRAZ/THE ITHACAN

Valesente said he gave Pidgeon the green light to play football this fall.

“I didn’t have any problem with it,” Valesente said. “I played three sports when I was here. So we just went from one sport to the other back in the day, of course. If he wanted to do that, and he really thought it would be good … go enjoy it. You’re going off with my best wishes.”

While the Bombers football team’s regular season comes to a close, the baseball team’s preseason is underway, despite Pidgeon’s absence.

Pidgeon said he is not worried about being unprepared for the baseball team’s season opener.

“Transition-wise, I guess once football season is over, I don’t think it’s going to be that hard,” he said. “Pretty much I’m going to have to get back in the cage and start swinging the bat.”

Pidgeon played two years of varsity football during his junior and senior years at Oneonta High School in Oneonta, New York. As a member of the Yellowjackets football team, Pidgeon played an assortment of positions, including tight end, fullback, halfback, outside linebacker and backup quarterback.

“He always did whatever you asked of him,” Hoover said. “He was all about the team, all about doing what he could do to help the team be successful.”

With a four-year layoff from the game, Pidgeon said it was more difficult for him to adjust to the mentality of the college game rather than the physical aspect of the game.

“I wasn’t really aware of how much goes into college football, especially defense– and offense-wise, even though I don’t play offense. The biggest thing I’d say was getting my head right, and I give props to coach [Mark McDonough] for that.”

Though he has only played in four games this season due to injuries during the beginning of the season, Pidgeon has made those opportunities count, racking up 2.5 sacks for a total loss of 22 yards in those games.

Defensive coordinator McDonough said because Pidgeon is such a well-rounded athlete, he was able to play football again despite not playing the game for an extended period of time.

Even though baseball and football were his go-to sports, Pidgeon did not limit himself to just those two sports throughout his athletic career.

Pidgeon wrestled from seventh to ninth grade. In 10th and 11th grade, Pidgeon was a member of his high school’s snowboarding team, and as a senior, he participated on the track and field team.

Pidgeon said he likes playing multiple sports because it gives him a different routine.

“I say I like just the change of pace,” he said. “I don’t like sticking with one sport all day round. Sometimes you have those days where you’re like, ‘Wow, I’m bored right now.’ As bad as it sounds, that’s kind of what it is. It makes an all-around athlete.”

“I’m not really for the people who say, ‘I’m just going to play baseball year–round,’” he said. “You got to be well-rounded. If you play more than one sport, your odds of becoming better, I think, are better.”

“I believe I only have one year left of football,” he said. “I can play baseball in the spring. That’ll be four [years] with baseball. I could do football again in the fall, if I came back for another year. But right now, no, I’m not planning on it.”