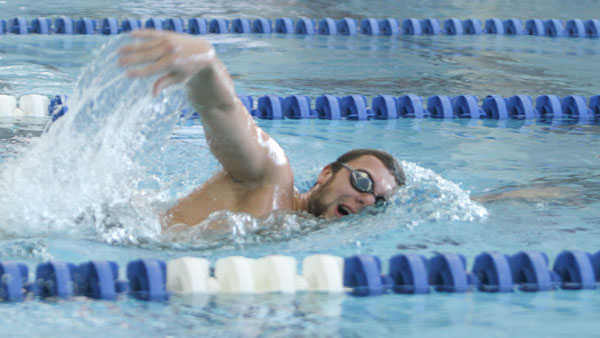 Taylor Van Cott, a co-captain for the men’s swimming and diving this season, has plenty to thankful for this year going into his senior season. His team has won 11 consecutive dual meets this season, and Van Cott has helped contributed to those victories. He leads the men’s swimming ranks in the top-10 all-time in the 100-yard and 200-yard freestyle and holds the school record in the 200-yard butterfly with time of 1:54.08. He also earned all-state honors after finishing second in the 400-yard medley relay at the Upper New York State Collegiate Swimming Championships last year.

Contributing Writer Jonathan Beck sat down with Van Cott to discuss his accomplishments as a swimmer, his role as captain on the team, and his outlook on the men’s season thus far.

Jonathan Beck: What first sparked your interest in swimming?

Taylor Van Cott: I started swimming when I was in seventh grade, and played football and lacrosse to stay in shape in the offseason. I tore my ACL twice, the first time my freshman year of high school. After rehabbing, my coach said swimming was a great sport and told me to keep with it. I ended up tearing my ACL again, so I stuck with swimming and had a really good sophomore year.

JB: Which team has given you the most competition thus far this year?

TV: Our biggest rival is Stevens Institute of Technology. We beat them at states my freshman and sophomore year, but lost to them last year by almost 20 points, which is close. We never usually swim against them in season because they aren’t in our conference, but they come to Empire 8 meet to compete.

JB: What is it like being one of four seniors on the team and does it have its advantages?

TV: It’s a great dynamic. My co-captain, Zack Kundel, and I went to same high school and we were captains there. We went to the same middle school too actually. So we’ve known each other for a long time. With the other guys, John Carr and Nick Warner, we have all lived together and are great friends, so it’s a great leadership dynamic.  Zack and I are captains, but it is more of a label because we all step up and lead the team.

JB: How do you feel your role as captain has helped the team so far this season?

TV: Zack and I like to lead by example, so getting there on time is always important. The one thing we like to do is get the guys pumped up before meets, whether it is meeting with them in the locker room, or the pasta night right before, we like to get them really motivated and excited to swim.

JB: What is it like balancing schoolwork with practice and meets along with your duties as captain?

TV: It is definitely difficult, but I think after four years of school you can really find your niche. If you are not doing anything different, it is pretty easy to balance it. It keeps everyone out of trouble too. Since you are in the pool for almost three hours a day, with morning and night practices, it keeps you busy.

JB: What do you think was your biggest accomplishment throughout your four years here at Ithaca College?

TV: I would say beating Stevens my freshman year was one of the biggest accomplishments we had. We went into the meet as always, excited and ready to swim are hardest, but it was the one time I saw our team turn into a family. We just hammered down and swam, and ended up beating them by a few points.

JB: You must have goals in mind for the season, could you share them?

TV: How states works is up to 22 guys can score, so we will be around that between divers and swimmers. Our goal every year is to send as many guys as we want to Nationals because it is a time cut you have to make. Last year we sent a couple of guys, so hopefully this year we can do the same.