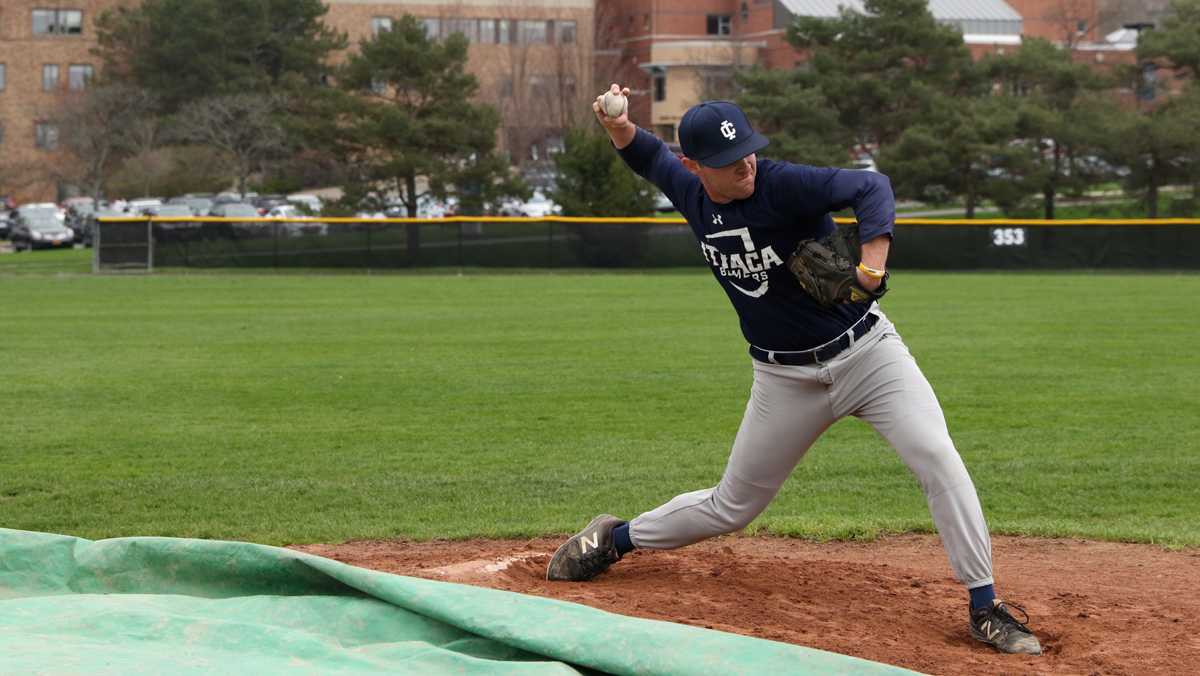 When Ithaca College baseball team players are looking to protect a lead, senior reliever Matt Eiel is their man.

Compared to most pitchers who throw overhand, Eiel slings the ball with a sidearm delivery, a technique he only began using his sophomore year of college.

Eiel found success with his new arm in just his first year using the new style. He was named to the NCAA New York Regional All Tournament team in 2017. In his junior season, he continued to improve, earning a spot on the Empire 8 First Team All Conference list.

In the 21.1 innings he has pitched this season, Eiel has accumulated 15 strikeouts, seven earned runs and a record of 3–0 with two saves. The Bombers boast a record of 23–7 this season, with a dominant 15–2 record in the Empire 8 Conference.

Eiel was just five years old when he began playing baseball. He was the youngest of three boys in his family, and Eiel looked up to his two older brothers, who both played baseball. His father was also instrumental to Eiel’s development as an athlete when he served as a coach for his Little League teams and as an assistant to his summer travel baseball team during high school.

“My dad was the first coach to emphasize the importance of throwing strikes to me,” Eiel said. “He helped me with my composure as I grew up.”

Things changed, however, once Eiel got to the college. Eiel spent his first season at the college on the junior varsity squad, and at the start of his sophomore year, he was given an ultimatum by head coach George Valesente: develop a better fastball that moves to the right and sinks, or remain on junior varsity.

“After the fall season of my sophomore year, Coach Valesente told me that he did not see me as a varsity pitcher at the time,” Eiel said. “He stated that it was my flat fastball that was holding me back. Like all IC pitchers, he wanted me to throw a two-seam fastball with arm-side tail and sink. After hearing him tell me that it was either throwing a fastball with good movement or spending another year playing with the JV team, I knew I had to do whatever it takes to develop more movement.”

Eiel’s fastball had a lack of movement during his early stages and because it was not coming in at elite speed, collegiate hitters would easily be able to identify a pitch and land a hit. A two-seam fastball typically has less speed than the traditional four-seam fastball due to a difference in the grip but makes up for it in its ability to tail to one side of the plate during its path to the catcher’s mitt. This movement makes it more difficult for batters to square the ball up and usually causes them to weakly hit the ball and make an out.

While in his hometown, Swarthmore, Pennsylvania, over winter break, Eiel worked with Dan Gusovsky, assistant baseball coach for Lehigh University, who was coaching at Swarthmore College at the time. They worked from November 2016 to January 2017 on perfecting the new pitching technique. It was a long learning process that carried its way into the 2017 spring season.

“He was the person to teach me the basic mechanics I needed to throw with,” Eiel said. “The toughest thing to learn was throwing a breaking ball from that arm angle. Getting the ball to spin the other way so that it would swoop across the zone and break glove-side was difficult.”

Through this training, Eiel developed his sidearm delivery that he has used ever since. With the new delivery, Eiel releases the ball at an angle that creates a unique movement on the ball.

“The ball rotates sideways, causing it to move to the right with some sinking action,” Eiel said. “The term ‘arm-side run’ is the idea that the ball will move back across the zone toward the side of the pitcher’s throwing hand. For a right–handed pitcher like myself, it will move to the right as it reaches the plate.”

Valesente said Eiel’s ability to adapt to a new pitching style gave him an opportunity to not only play at the varsity level but become elite at his position.

“When he came in here as a freshman, he had a different pitching style, which, to me, didn’t look like he was gonna be able to pitch at the varsity level with any kind of success,” Valesente said. “We decided we were going to try sidearm pitching. … From a purely baseball standpoint, he came from possibly not even being a member of this team to being a significant contributor.”

Eiel said the different motion makes no difference to him in the soreness and recovery process. Though the delivery doesn’t affect Eiel’s arm negatively, it is known to have affected young pitchers negatively due to the strain being placed on the elbow and shoulder when pitching sidearm.

Since making the change, Eiel has also developed a new pitch that has helped him greatly against his opponents.

“Throwing sidearm taught me an important pitch that I hadn’t used much before — the inside fastball,” he said. “When pitching to right–handed hitters, my fastball will move in on their hands to jam them and produce weak contact.”

Eiel continues to test his abilities, especially against his teammates during scrimmages in the fall preseason. He said the ways in which his teammates react to pitches help him figure out which ones he wants to continue to develop for the spring season.

“In the fall seasons, the hitters helped a lot because we would scrimmage, so they would let me know which pitches stunk and which were good by how well they hit them,” Eiel said. “[Seniors] Webb and Sam Little both taught me that I needed a better changeup. They taught me this by consistently ripping my fastball for extra–base hits.”

Valesente said Eiel is the first sidearm pitcher he has coached since he began coaching the team in 1979. He said players like Eiel show how the game changes and how different styles allow certain players to reach their full potentials.

“As we have progressed through the years, we’ve always had pretty solid pitching, so there hasn’t been a need of [sidearm pitching],” Valesente said. “In the last year or so, we were not at the level we wanted to be, so him trying that out was to create pitches that were going to be effective for us in the short term. In my career, each year I learn more and more. I try to develop a lot of pitchers into a style that I think they’re going to be successful in.”

After two years of sidearm pitching, Eiel has emerged as the team’s best closer. He attributes much of his development and success to the college’s coaching staff and his teammates.

“I truly owe it all to my team,” Eiel said. “Without the intense competition for roster spots, the positive attitude from teammates, the conditioning and arm care from the athletic trainers and the challenging atmosphere created by the coaches, I never would have reached the level of play I’m at now.”

Sophomore pitcher Bill Willett said Eiel is both a strong leader and a team player.

“Matt is one of the hardest working players I have ever met,” Willett said. “He not only leads with his voice but his actions, too. That is what makes him so respected amongst the guys, … he doesn’t care about his own personal glory at all.”

The Bomber’s will continue to use their talented pitching staff to help shut down opposing teams in their pursuit of an eighth straight Empire 8 Conference Championship. As for Eiel, he’ll be ready when his name is called.

“It’s all on the line this season,” Eiel said. “As a senior, I’m just trying to capitalize on every possible opportunity to help the team win.”