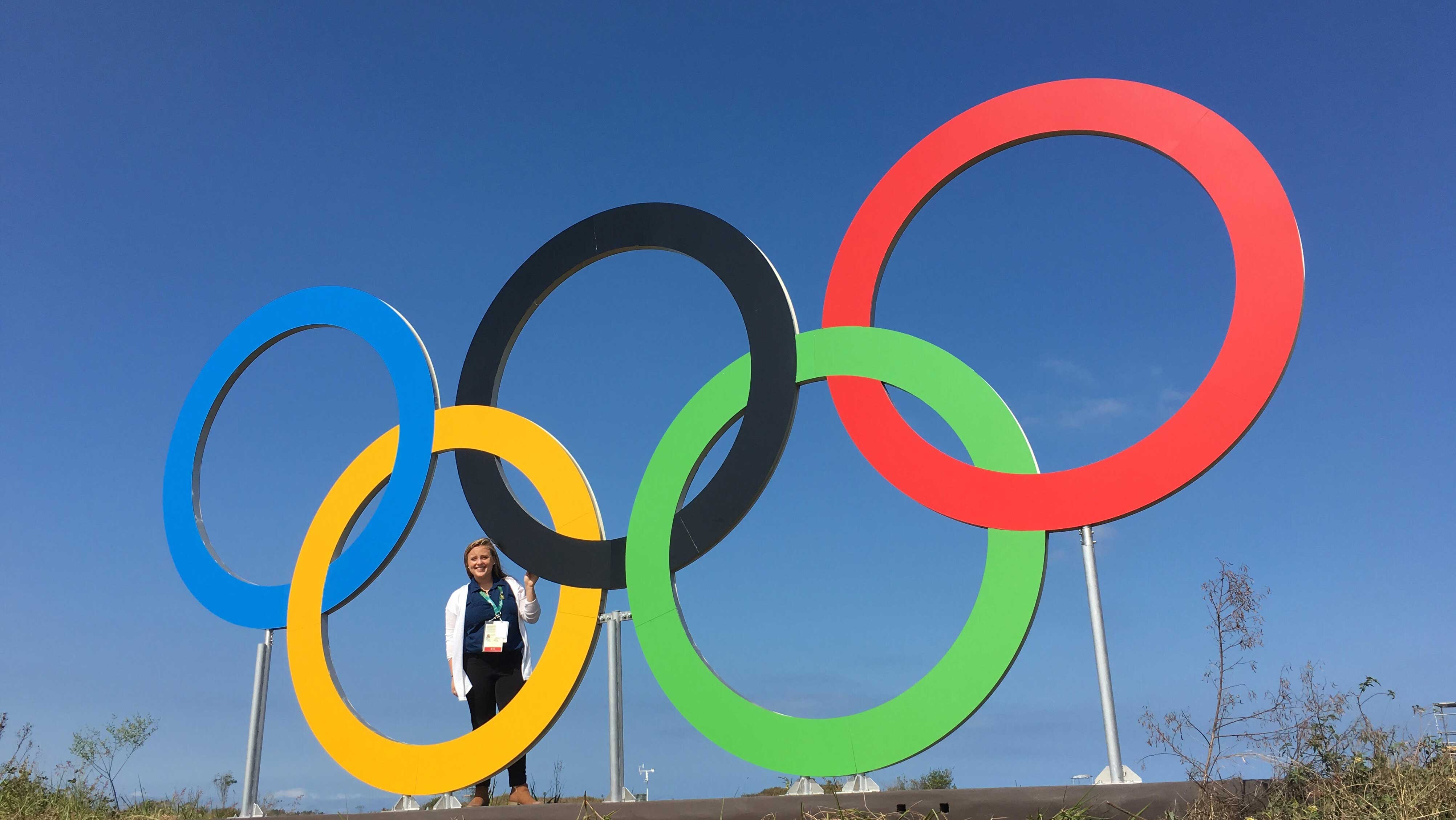 PHOTO COURTESY OF Madeline Overholt
Overholt stands in front of the Olympic rings in Rio De Janeiro. She missed part of the tennis preseason because she was interning for NBC Olympics in Rio de Janeiro, where she was a runner at the Olympic Golf Course.
By Casey Koenig — Staff Writer
Published: August 30, 2016

Senior Madeline Overholt was one of three Ithaca College students to travel to Rio de Janeiro to intern with NBC, covering the Summer Olympics. However, taking this opportunity meant missing half of her tennis preseason.

“If the Olympics ran further into my season, I would have been more hesitant,” Overholt said. “I could not give up the opportunity to at least apply to the Olympics.”

The tennis preseason began Aug. 21, and the team’s first match is Sept. 4. Overholt did not return to Ithaca until the weekend of Aug. 27.

The application process ended in May 2015. Overholt, along with more than 2,000 other college students from across the country, applied online and went through a series of interviews throughout the summer of 2015. One hundred fourteen were selected to intern in Rio while others would intern for NBC in Connecticut, including nine students from the college. Overholt learned she was selected in January.

While in Rio, Overholt was an NBC runner at the Olympic Golf Course, where her job was to assist production in any way possible. She worked with members of the Golf Channel in producing both “Live From,” which is the pre- and post-golf show, and the “Unilateral” show, which covers the tournament in its entirety.

To compensate for not being able to train at home or at the college, Overholt said, she used the resources she had available in Rio. She used stairwells, furniture and the surrounding area as an alternative gym. Her exercises included sprinting up the stairs of her eight-story building and jumping rope. She said her main focus was on strength and conditioning, which included regular stroke drills and figure eights.

She has also been working alongside a member of Princeton University’s women’s track and field team.

“She has been extremely encouraging throughout my time here,” Overholt said. “We motivate each other to work out even after our 12-hour shifts.”

Overholt said tennis is just as much a mental sport as it is a physical one, so to keep up her mental game, she reread “The Inner Game of Tennis” by W. Timothy Gallwey.

“This is a book that has greatly benefited me in the past with handling the psychological stress on court,” Overholt said.

Last season, Overholt had an overall singles record of 3–2 and was 2–0 within the Empire 8. The previous season, she was 7–4 in singles play overall and 5–0 in the Empire 8. Overholt said her coaches — Bill Austin and Jordon Smith — have been supporting her and keeping in touch with her throughout the summer.

Overholt is the second tennis player from the college to intern at the Summer Olympics. In 2012, then–men’s tennis player Kyle Reither interned at the London Olympics. Austin said Reither felt that he had the experience of a lifetime in London.

“For him to be able to share what he did over there with everyone else on the team was really cool, and my guess is Maddie’s going to come back with a lot of stories and a lot of things that she learned over there that she’s going to share with the team, and it’s an experience that can’t be duplicated,” Austin said. “It’s just wonderful that Ithaca College has that relationship that allows these kids to do that.”

Sophomore Caroline Dunn said last week she is confident that Overholt’s transition back to the team will be easy because she is always working hard and giving extra effort.

“Because of her experiences at the Olympics, it will help motivate her to be the best she can be for her last year here at IC,” Dunn said. “I’m excited for her to return and bring up the energy for our team because we do miss her.”

Austin said Overholt is very involved in a lot of things besides tennis, and that her time in Rio will help her grow as a leader.

Even though Overholt was able to train in Rio, she said she knows she won’t be in the shape she usually is in when the season starts, but that was a sacrifice she was willing to make.

“I knew it would definitely be a setback for me on the court, and that is something I have been able to mentally prepare for,” Overholt said. “I understand that I am not going to be hitting as well initially, but with practice and patience, I will hopefully be able to get to where I want to be on the court.”

Lone senior serves as leader of the women’s tennis team