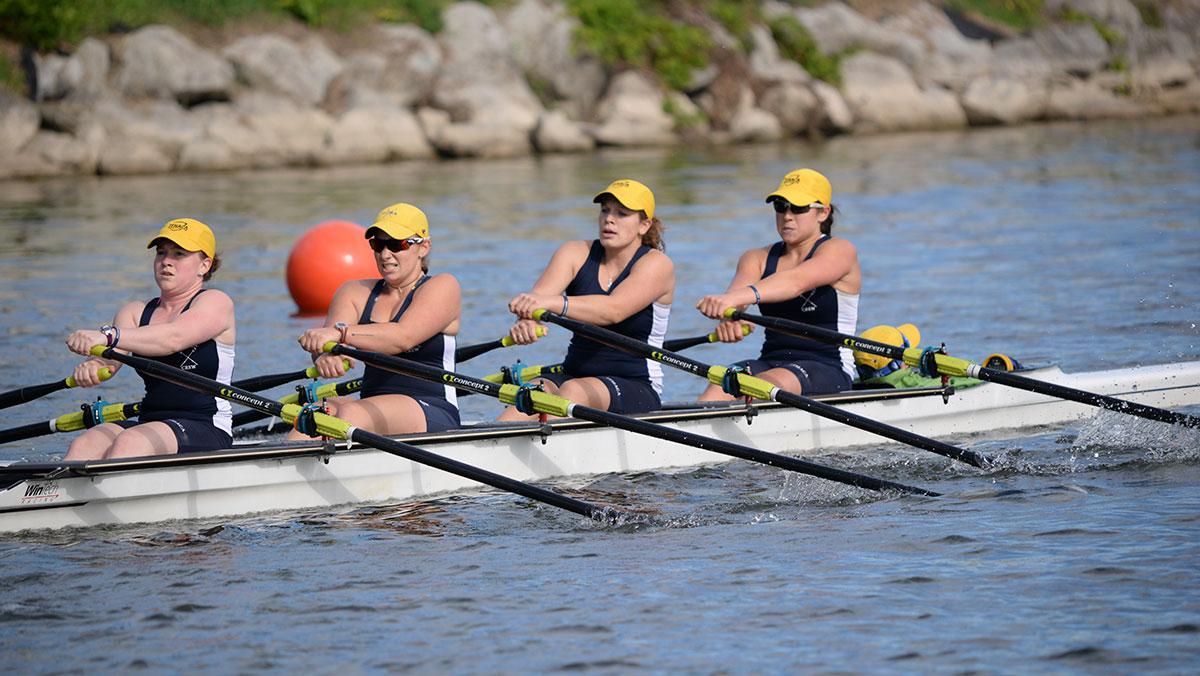 From swimming to crew to sculling, senior Chloe Lewis has always been in the water, leading her to many different paths and experiences in life.

Lewis, who grew up in Bronxville, New York, began competing in sports when she was 4 years old. She suffered a torn rotator cuff in her shoulder from overtraining as a swimmer in middle school.

Lewis said athletics have always been a big part of her life, and she did not want to lose that after she was injured in swimming.

“I’m incredibly competitive, and I knew I had to find something to fuel my competitive edge when I couldn’t swim anymore,” Lewis said.

Before her freshman year at Bronxville High School, Lewis was told by a friend to try rowing. Later that year, she picked up the sport and joined the crew team. After nine months of training, Lewis moved on to sculling and competed shortly after starting in her first quad boat. This would be the beginning of a sport that would lead her to new steps in life.

During Lewis’ senior year of high school, she was recruited to come to Ithaca College by head coach Beth Greene of the sculling team. It was the program’s first season that year — 2012–13 — and Lewis was the only freshman on the team.

She began her career for the Bombers in the quad boat, as the team did not have any singles rowers at the time. While she was getting to know her team, she also gained a mentor in Greene. Greene said she is proud of not only Lewis’ performance this year but also the work that she has put in to be a better teammate.

“She has had to do a lot of work on herself,” Greene said. “She came in really competitive and sometimes that came off the wrong way.”

But her teammate, senior Katie Ely, said Lewis is a great example of what a teammate should be like.

“While it’s difficult at first to adjust to the team mentality in the sport of rowing, Chloe is a perfect example of how the sense of teamwork, when paired with a passion for the sport, matures and evolves over time,” Ely said.

Though Lewis has been around water for most of her life, it is not the only thing she does. When she is not rowing a boat, she can be seen working as the outreach coordinator for IC Athlete Ally, which she created two years ago. IC Athlete Ally is an organization that focuses on trying to eliminate transphobia and homophobia throughout athletic teams on campus.

Lewis said the club is starting with a small goal and then expanding to the world.

“We want to eliminate the phobias on all campuses, but first ours,” Lewis said.

This was the second club she has taken part in during her college career. The first was for her to keep indulging in her hobby from childhood. Lewis said she started to ride horses at the same time she began swimming, and during her summers at home she would stay on farms and ride horses. She competed until high school in the equestrian category, but her love for horses never died. When she got to the college, she joined the Equestrian Club.

Lewis said she’s involved with the club on the side, so it’s not a huge time commitment. While competing in equestrian and sculling, she found something else she enjoyed in life while training over summer.

For the past two summers, Lewis has participated in training at Undine Barge Club in Philadelphia. This is one of the many rowing clubs that are offered in the city of Philadelphia.

Being in Philadelphia was the first time that Lewis had ever been alone. During this time alone, Lewis discovered that cooking was yet another hobby of hers. Even though Lewis came to the college as an exercise science and sociology double-major, now a psychology major, she said after she graduates she is thinking about attending culinary school to further her hobby.

Lewis said she plans on joining the Undine Barge Club as a member to continue her passion for sculling. She said sculling is a lifestyle and a big part of her life.

Throughout her career, Lewis has been put in a single, paired in a double and rowed in a quad. She has won medals in many meets, but she said she is still learning about the sport.

“From there it was honestly love at first stroke. I felt like I was meant to be in that boat. It just felt incredibly natural,” Lewis said.