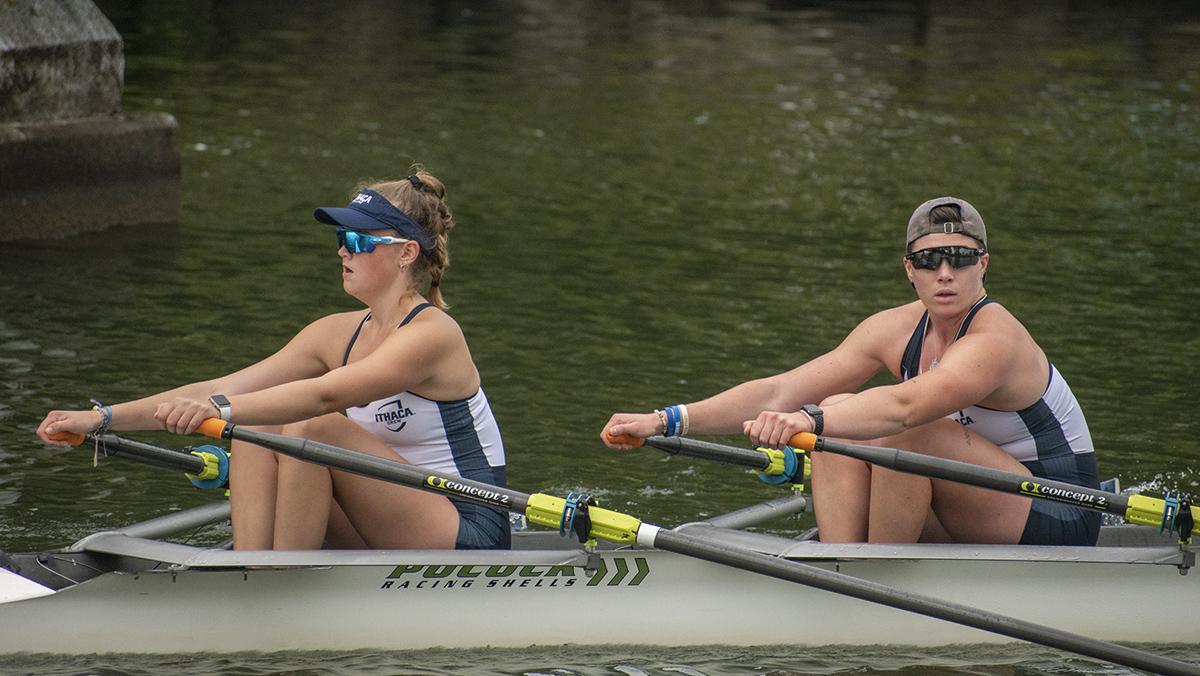 Nolan Saunders/The Ithacan
From left, seniors Katrina Pohlman and Taylor Volmrich of the Ithaca College sculling team. Volmrich, a captain, has been one of the team’s top rowers this season.
By Hannah Fichter — Contributing Writer
Published: October 19, 2022

The 2022 sculling season has been strong for the Ithaca College sculling team. The Bombers have seen strong performances from all of its boats at all three competitions.

One rower, senior Taylor Volmrich, has been one of the top performers anchoring the team this season. At the Cayuga Sprints on Sept. 25, Volmrich and senior Katrina Pohlman rowed to a second-place finish in the doubles category.

At the Green Mountain Head Regatta on Oct. 2 in Putney, Vermont, Volmrich took the top spot in the women’s collegiate singles race, a 5K stake race, with a time of 22:11.9 in a race that saw the Bombers take the top four spots. Her time was nearly a full minute faster than the second-place finisher, and was over three minutes faster than the fastest competitor from another college.

Volmrich followed up that performance with another strong showing at the Head of the Genesee on Oct. 8, speeding to a first-place finish of 21:47.05, almost two minutes faster than the second-place finisher.

Contributing writer Hannah Fichter spoke with Volmrich to discuss her season so far and her goals for the last few competitions.

Hannah Fichter: How does it feel to be one of the top performers on the team this season?

Taylor Volmrich: I think it’s really cool. I mean, rowing is really interesting because in [the] fall for us, when we’re sculling, it becomes so individual, versus when we’re in [the] spring season, and it’s in an eight[-person boat], and it’s just about the team boats. So it’s really cool, and it’s really exciting, but it’s definitely nice to know that it’s like my teammates pushed me to be there, because obviously, like when we’re racing, most of our competition is the rest of our team.

HF: How do you keep yourself locked in mentally during a race?

TV: It’s all on you. I think, for me, that’s what’s really fun about it, because, no matter what the outcome is, you know that it was 100% you. In a quad, the fun part is that it’s a team effort, and you know you’re pushing with everyone. But at the same time it’s kind of like, ‘did I give my best performance?’ It’s hard to know that versus when you’re in a single. Whether you win or you lose, you say, ‘I did that. That was me.’ … And then the same thing I said before, like, even though you’re in the boat by yourself, you’re still rowing for your team. You’re still wearing an Ithaca [College] crest and pushing for that. So I think that’s a big part of it for me, I know I’m doing it for my team and for Ithaca [College].

HF: As an older student and captain, how do you influence the underclassmen?

TV: We have three captains: me [and seniors] Erika [Elcsisin] and Brenna [Hanratty]. … We each have our own individual kind of influence … so for me, [my role is] holding people accountable because we have standards and we want to come into spring season and absolutely crush it. We went into NCAAs ranked first last year, and we definitely want to do that again. And then also, you know, the goal is to come out of it with an NCAA championship, so, like, kind of keeping that in people’s minds, because we’re all the way in fall right now and it feels so, so far away. … And then also, like you gotta keep it fun. Keep it light.

HF: How does it make you feel that you’re doing so well considering how long you’ve been on the team?

TV: It’s really wild. I mean, I was pretty slow sculling my first year. We did a sculling time trial and I’d never been in a single before. I was like, ‘Oh, this is so scary, I feel like I’m going to flip,’ and I truly owe it to the people, all of the rowers that came before me, and then that’s the other thing is I want to pay it forward with the rest of the team because everybody starts somewhere.

HF: What have you learned through your college career that has come together to produce this result?

TV: One of my coach’s favorite quotes is, ‘Trust the process.’ I think a lot of coaches say that and a lot of the times you just shake it off and you’re like, ‘Oh, yeah, the process.’ But, like, truly, for a sport like this, or like running, or something that requires so much fitness that goes into it, you’re not gonna get results in two weeks, three weeks, a month even. It requires that consistent work and effort into every piece. And so the other thing is attention to detail, because rowing takes a lot of technique. Sculling especially is a technical game. If the water is terrible, it doesn’t matter how strong you are. You just have to row cleaner than everybody else.

HF: How do you want to close out your season?

TV: I mean, we’re going to the Head of the Charles this weekend and the goal is always to win. I haven’t really rode with some of the people in our boat. It’s really cool for the Charles because it’s based on 5K time and it’s based on seniority, which is not how we get voted in the spring. So the Charles boat is always something that’s a little bit unexpected. The Charles is a crazy experience. There’s just thousands of people there. It’s such a big showing of the rowing community, which is the big part of going to the Charles. We want to make top half to re-qualify for next year. We want to win but, like, to go there and feel the energy and see all the people I’ve rode with previously. It’s just really, really cool.