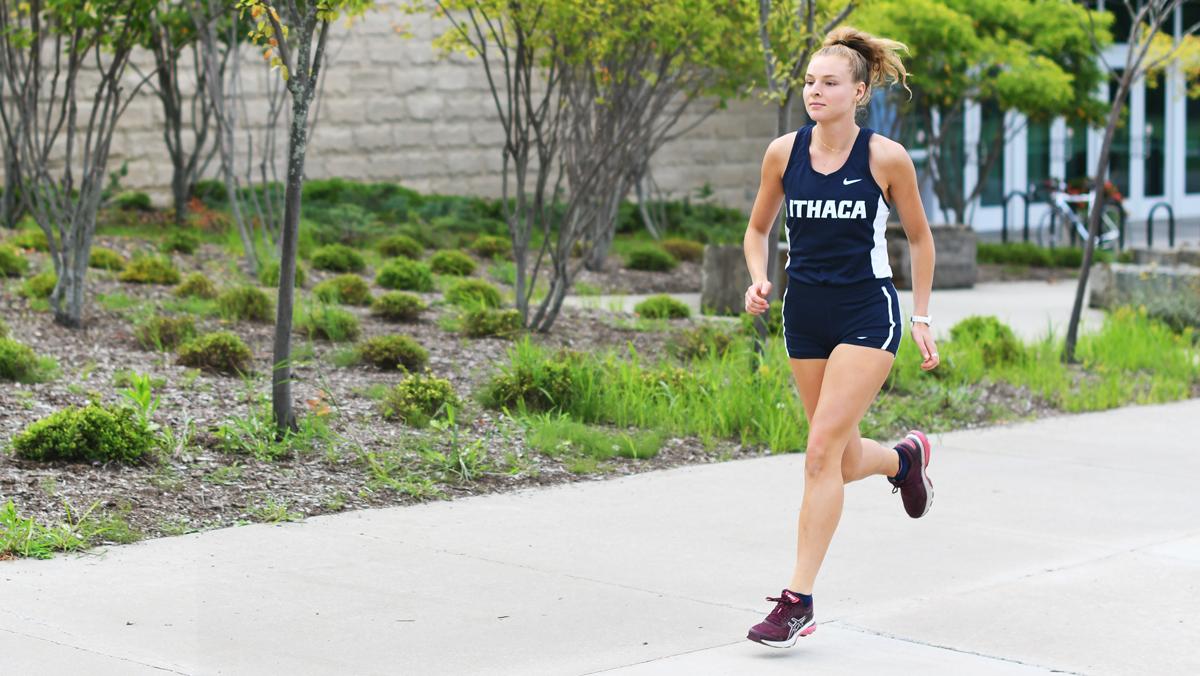 Kristen Harrison/THE ITHACAN
Senior cross-country runner Sarah Rudge has been running for both the cross-country and track teams at Ithaca College since her freshman year. After a nationals run this fall, Rudge prepares for her indoor track season this winter.
By Arla Davis — Staff Writer
Published: December 3, 2019

The Ithaca College men’s and women’s cross-country teams had a historic 2019 season that ended with both teams qualifying for the NCAA Division III Cross-Country National Championship for the first time since 2002.

At the championship Nov. 23, both teams finished in 26th place overall out of 32 squads.

Senior Sarah Rudge contributed to the Bombers’ success throughout the season. She placed ninth at the NCAA Division III Atlantic Region Cross-Country Championships on Nov. 16, 13th at the Liberty League championships Nov. 2 and sixth at the Hamilton Short Course Invitational on Sept. 7.

While the cross-country season may have just ended, Rudge and most of the other runners are just getting started. The squad has just two weeks between nationals and the first meet of the indoor track and field season Dec. 7.

Staff writer Arla Davis sat down with Rudge to discuss the national championship meet and the transition from cross-country to indoor track.

Arla Davis: What was the experience like of competing alongside the men’s team at nationals?

Sarah Rudge: I can’t exaggerate how big of a deal this was for us. Since my freshman year, there has been this dream of both men’s and women’s team making it to NCAA championship together because we train together all season long and go to the same meets. There is this feeling that we want to make it to the championship together. We are separate teams, but we do so much together that making it as a duo was so important to us. It was so exciting to finally get there and incredibly special for the seniors.

AD: Did the team do anything different to prepare for the national championship compared to prior meets this season?

SR: I would say no. Erin [Dinan], our head coach, keeps our training really consistent. We tried to treat this meet like every other meet just so no one got too nervous or felt too much pressure. She really just wanted you to go out there and do your best.

AD: What was it like to experience Hannan’s win at nationals?

SR: It was just incredible. When I finished the race, the very first thing I asked my team was, “How did Parley do?” I knew she was going to win, but of course, you do not want to say that beforehand. It was one of those situations where I wish I could be in two places at once, and I could have watched her run the race myself.

AD: How does the team transition into indoor track after the cross-country season ends?

SR: It is actually pretty good timing because we get the week of Thanksgiving break off to recover. We also have a week in winter break off too. Then some people come back and do meets right away, but not everyone does, so the transition is more manageable than you would think.

AD: What are some differences with competing in cross-country versus track?

SR: I think the main difference, besides cross-country being a smaller team, is that in a cross-country meet we are all basically running at the same time, but then in track we are all going at different times. I get to watch my teammates succeed and cheer for them, and that is what I love about track. I get that chance to finally see our hard work in practice pay off in competition.

AD: How is the training for track different than cross-country?

SR: We have the same coach for track, so our training is kind of the same all year depending on the event. In cross-country, some people will go into track and then do the 5,000-meter, which is very similar training. Some people will cut down and run the 800 [meter] or the 1,600 [meter]. Those people will do more speed work and run less miles.

AD: What are your goals going into the track season?

SR: I think the overall goal of the coaches is getting as many individuals to nationals as possible. [Head coach Jennifer] Potter wants us to place highly as a team, which has not always been the goal in the past. Sometimes, coming up with the cross-country team, goals are a little bit more confusing because we are all doing the same thing, but I know everyone just wants to see all their hard work pay off on the track. We had a successful cross-country season, and I think everyone wants that to transfer over to great times on the track.