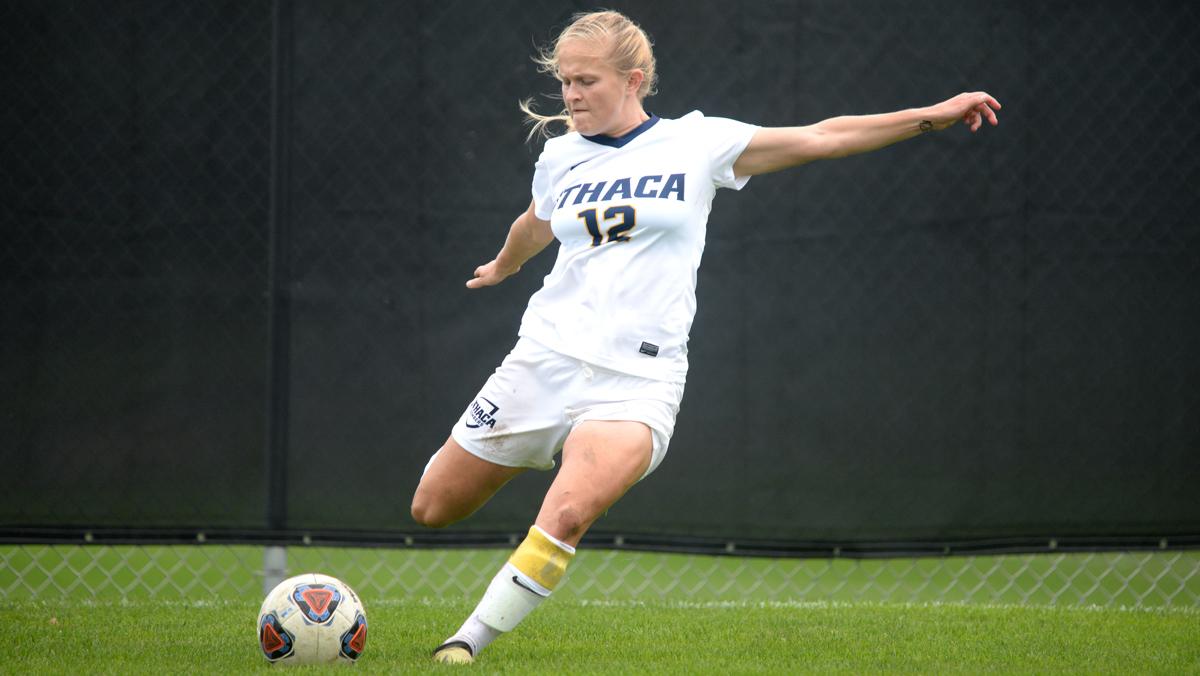 The Ithaca College women’s soccer team has gotten off to a 9–1–2 start, already eclipsing its 2017 record with six games remaining in the regular season. The team’s overall record in the 2017 season was 7–9.

Senior midfielder and defender Reid Garner, who hails from Cicero, NY, has been a starter in all 12 games so far this season and started 15 games for the Bombers her junior year. She had a prolific high school career at Cicero-North Syracuse High School, where she earned four varsity letters and was the Central New York Player of the Year in 2013.

She has logged 1030 minutes and has scored one goal, all while anchoring a Blue and Gold defense that has only allowed seven goals this season. The Bombers faced Bard College on Oct. 6 for senior day and came away with a 2–0 victory, which improved their record to 9–1–2, and 3–1–0 within the Liberty League. Garner started and played the entire 90 minutes, recording one shot on goal from the midfield position.

Assistant sports editor Jack Murray spoke with Garner about her senior day celebration, her experiences as a Bomber and the success of the women’s soccer team.

Jack Murray: How has your senior season been so far?

Reid Garner: It’s been really good. We have a special group of people. Each year we definitely learn something new, and it’s nice that as seniors, we are able to incorporate things that were important during our freshman year into this year’s team. We also have learned a lot from the seniors previous to us.

JM: What was the experience at senior day like?

RG: Senior day was very nice. Our juniors set up a really beautiful display in the locker room, and it was nice to win on our day. I can also appreciate that, fortunately, it was not the last time I get to play on Carp Wood, which will be bittersweet.

JM:  The team has taken a big step up this year already. What do you think has been the key to your success this year?

RG: We certainly learned a lot last season. We really clicked on the last game, which is unfortunate, but using that momentum moving forward in the spring and then coming in with some key freshmen allowed us to put it all together this year.

JM: How do you believe the rest of the Liberty League Conference schedule is going to go?

RG: We learn a lot from other teams, and being able to have played them once already is tremendous in mentally preparing for the games. Having the lead we do this year and the momentum going forward has really prepared us for each game, both mentally and physically, to just give them the best game.

JM: How has your career with the Bombers impacted you?

RG: I have been playing soccer since I was seven, but being a Bomber soccer player is different than any other team I have been on before. There is the culture behind each team and how much effort we put into networking and staying in touch with alumni and staying focused on what it means to play for Ithaca and the honor of it. It has just been tremendous.

JM: What are the team’s overall goals for the season?

RG: I think we are taking it one goal at a time. Every game, we say, ‘Okay, we are going to win, and what are we going to do to be great and help us grow as a team?’ The overall goal is to make the NCAA tournament. We haven’t made it the past two years, but we have a shot this year, and we just want to continue this momentum.

JM: What has being a Bomber meant to you?

RG: Being a Bomber has become part of me in ways I never expected. Playing on this team has really given me a different support system than I’ve ever had. The culture and history of this team is not one I will soon forget. I think being a Bomber has been what made coming to Ithaca College worth it.

JM: What will you miss about being a Bomber?

RG: I will miss the challenges and how it has helped me grow as a person. I will miss being able to work my stress away on the practice field and forget all my troubles and enjoy the bus rides. I will miss the pregame dance parties and inside jokes and seeing my closest friends every day.