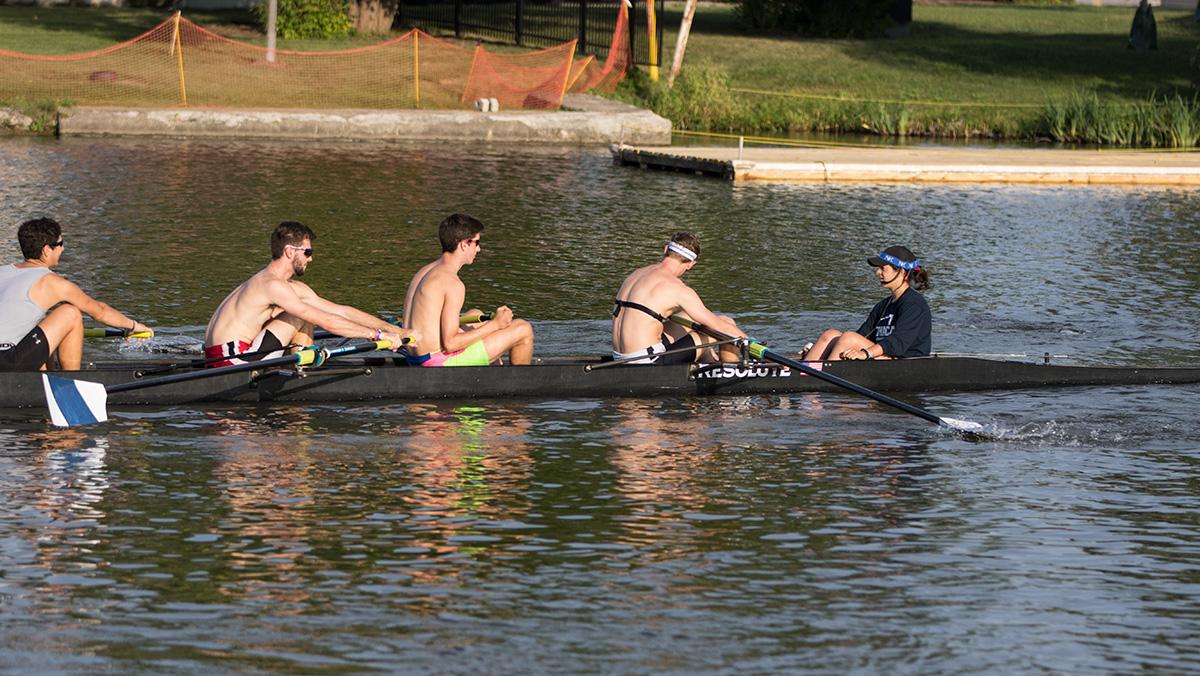 SAM FULLER/THE ITHACAN
Senior Sydney Eckstein practices with her boat Sept. 19 on the Cayuga Inlet. She has been the coxswain for the men's rowing team for the past three seasons.
By Matias Weilmann — Contributing Writer
Published: September 19, 2016

On the Cayuga Inlet every day, eight men make up the varsity boat for the Ithaca College men’s rowing team, but at the front of the boat feeding them instructions is senior Sydney Eckstein.

Eckstein said her high school did not have a rowing team and that she had no intention of rowing when she enrolled at the college back in 2013. Now, three years later, she leads the men’s team as the only female coxswain.

“When I got to school and saw what it was about, I kind of loved the idea of being on a team sport and making a bunch of good friends and thought it was really interesting and wanted to see what would come of it,” Eckstein said. “I joined the men’s team because there was an extra coxswain spot.”

The coxswain acts as an assistant coach and makes sure the boat is safe and heading in the correct direction. They are usually a smaller person so the boat does not have unnecessary weight on it. The coxswain is often referred to as the “brain” of the boat, with the rowers’ being the “muscle.”

Men’s head coach Dan Robinson said he estimates that about half of the coxswains he has had since he began coaching 29 seasons ago are women.

“We don’t look at it as male and female,” Robinson said. “We share it [the boathouse] with the women’s team, and there’s a culture of respect.”

Eckstein said she was able to adapt and become part of the team with no issues, due in part to her growing up around boys. At first, she said, she was a bit intimidated by the team, but that went away as soon as she became involved.

“Everybody was really accepting and made it comfortable for me, and I immediately felt like they were all my friends,” she said.

Eckstein joined the team in the spring semester of her freshman year and missed a semester to study abroad.

Despite her late start, Robinson said she has never failed to impress with her dedication and commitment to improving herself and the team.

“She’s beyond her years in her maturity and easygoing attitude,” Robinson said. “She has told me she wants to compete and move higher, so she’s been there every day and has been resilient.”

“She is hardworking, always asking, ‘What can I do to improve,’” he said. “She is definitely a leader. Her work ethic has just exploded since sophomore year. Last week we had a 6:30 lift; coxswains are not required to work out, but the moment I got there, she’s sitting there working out, and she worked out the entire time I was there. She goes above and beyond.”

Although Cadoux said he was recruited and had been rowing since eighth grade, he was tentative about continuing to row in college.

“When I joined the team, I was very worried about continuing rowing in college, and she is someone I was able to talk to and see, ‘Look what Sydney is doing and how she is pushing herself.’ If she can push herself like that, I can too,” Cadoux said. “She was a great example of someone I wanted to follow and someone I was able to resemble my work ethic after.”

Despite initially being hesitant, Eckstein said she doesn’t regret joining the men’s team.

“I always thought I would like to row, and that would mean I’d have to swap over [to the women’s team], but I don’t know. I have too much fun with the boys,” she said.