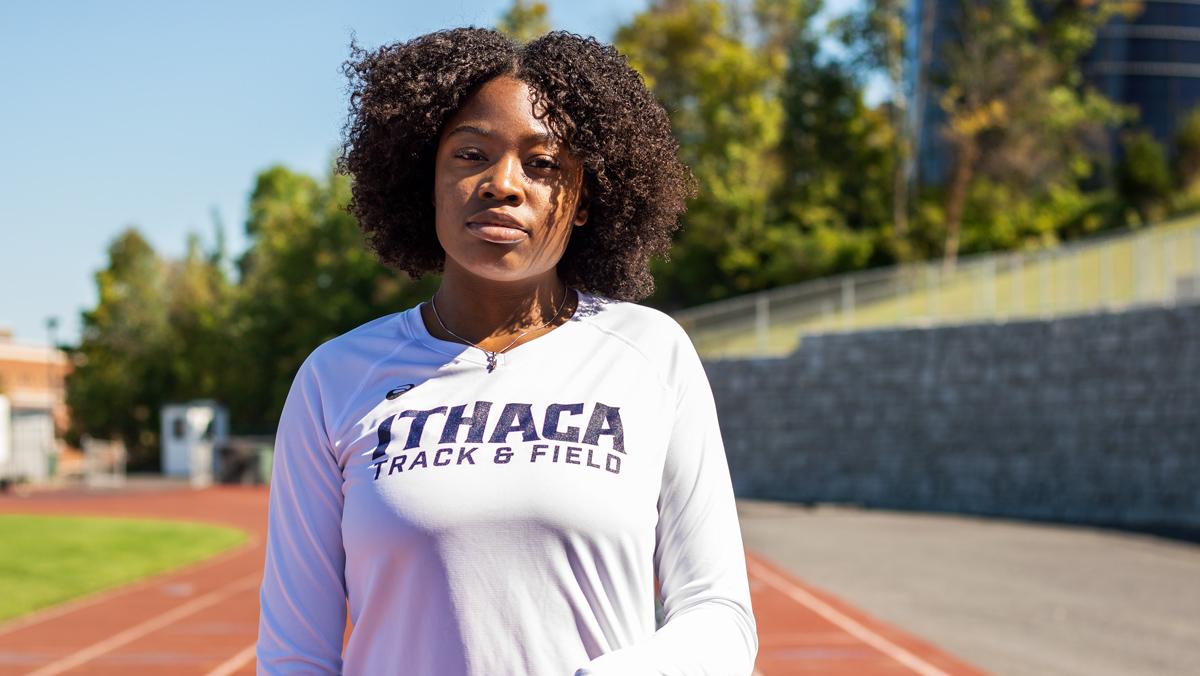 Emily Silver/The Ithacan
Senior sprinter Katelyn Hutchison is one of the top returning upperclassmen for the women's indoor track and field team, and is looking to build off of a strong spring 2021 season.
By Rocco Di Maiolo — Staff Writer
Published: November 11, 2021

The Ithaca College women’s track and field team begins its season in less than a month and will look to set high expectations after coming back from a strong spring season. Senior sprinter Katelyn Hutchison will play an integral role for the Bombers team with the many accolades she holds on her resume.

Hutchison set a program record in the 400-meter dash, with a time of 56.30 seconds in the 2019–20 season. She was Liberty League First-Team and NCAA Indoor All-American that season as well.

Staff writer Rocco Di Maiolo sat down with Hutchison to discuss her goals and expectations for herself and the team this season.

Rocco Di Maiolo: Can you just tell me what it was like returning back to play when things finally started to loosen up?

Katelyn Hutchison: So we were able to come back and compete last spring. Except, I would definitely say for me personally, it was very stressful … mainly because there were so many things that were changed. There were some new, super strict rules that obviously none of us were necessarily used to, so it definitely took a while to adjust. … I feel like performance wise, I might not have done as well as I wanted to. I mean, I’m an All-American … but I feel like I definitely wanted to do better, and could have done better if I didn’t have to worry about the stress of [the COVID-19 pandemic].

RD: With that being said, how would you say the rest of your team has adjusted to that? And as a follow up how do you feel right now going into this season? You and your team?

KH: In terms of the team coming back last semester, [there are] definitely some similar feelings of being stressed about all the new rules and stuff that we had to follow. … Some people adjusted better than others, some people took longer to adjust than others, but I think … when we’re able to start actually practicing outside and championship season starts to roll around, we’ll definitely have … better feelings … We have something to actually be excited about considering our other championship season got canceled the year before. … So, we’re really focusing on coming to practice every day with that championship mindset and really appreciating the little things because, obviously, we want to keep the cases down and we don’t want to repeat a year or two ago.

RD: What can we expect out of this year’s team? Any significant changes since the last time out?

KH: You can definitely expect that we’re winning nationals this year. I’m a person of extreme faith, so I feel as though we’re going to do it because, for myself with what I want to do, I told coach, “I want to be national champion, I want to have a national record.” A couple of my teammates have already done that, now it’s my turn. …  We will definitely continue to practice and act as though we’re going to get first and do what we have to do at regionals and at conferences as well. … Even the freshmen have come into it and they’re so excited and so pumped and ready to go. They want to be a part of this national championship team mindset as well. We definitely have a crew of individuals that are ready to take it down, from freshman to graduate students.

KH: One thing that I’ve learned is to be really vocal about being confident in the goals that you have for yourself… I want to be a national champion and I want to have the national record. I mean, if you look at my results, you’re probably going to be like, “that’s a little crazy.” But, I’ve come to the point in my life where I couldn’t care less how crazy it is. And so I really want to be able to teach the underclassmen to be bold. … If that’s something that you want to do, then you take the time, you take the dedication to be able to work towards that and get to it, because the thing is that people are going to take you seriously if you take yourself seriously.

One on One with Katelyn Hutchison