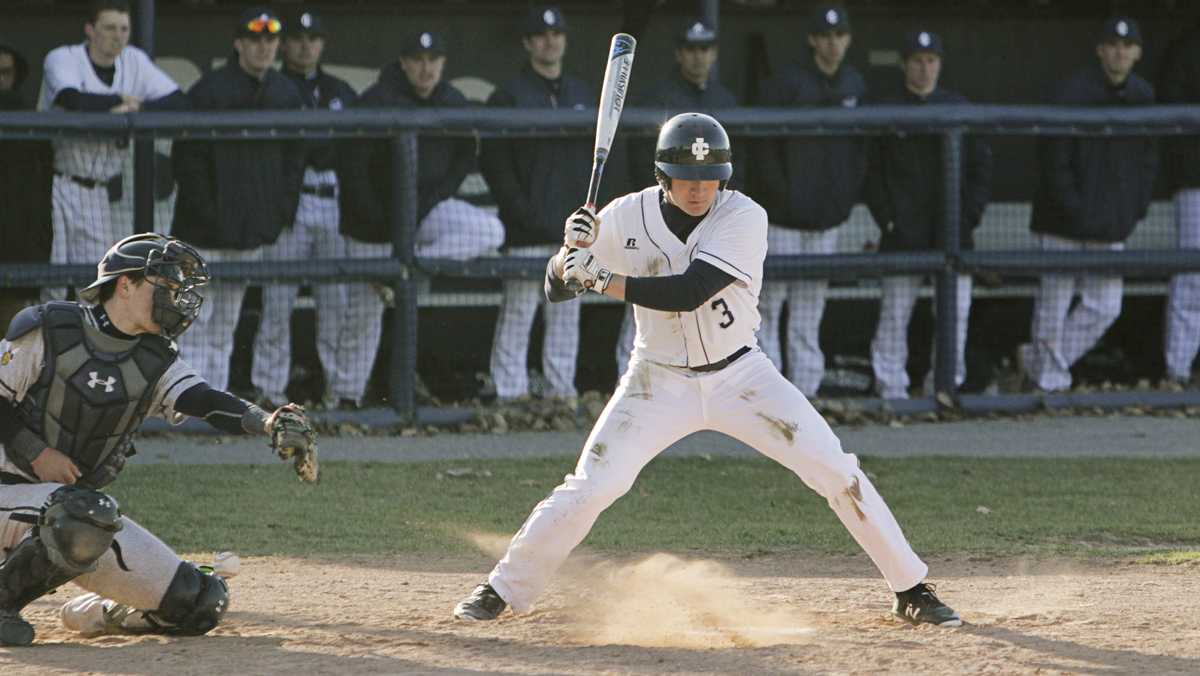 The Ithaca College men’s baseball team has had a stellar first half of the season, with an overall record of 15–5 and an Empire 8 record of 9–1. At this time last season, the Bombers’ overall record was just 11–9.

The South Hill squad defeated then-No. 18 California Lutheran University on March 10 and has continued to dominate, suffering its only league loss of the season to Stevens Institute of Technology in the second game of a doubleheader March 27.

Senior Garrett Snyder worked his way onto the Blue and Gold’s starting lineup for the first time this season as an outfielder. He has started in 15 of 17 games so far and boasts a .345 batting average. He has also posted 11 runs so far, with a season-high of three against Utica College on March 24.

Snyder sat down with Assistant Sports Editor Emily Adams to discuss his development as a part of the Bombers’ baseball team and his outlook for the remainder of the season.

Emily Adams: How are you feeling about the season so far?

Garrett Snyder: I’m feeling alright. We just have to put all the pieces together. We have in some games, and in some games, we haven’t, so that’s been pretty frustrating. But in the games we have, I think we look pretty good. We just have to build on our successes and continue that as we finish out our season and move on to Empire 8.

EA: How do you feel like your role on the team has changed this year?

GS: I’ve definitely evolved into more of a senior leader as someone who’s been on the team for three years now. I feel like a lot of the younger guys look up to me, so I have to set that positive example every day. It’s kind of exhausting sometimes, but I just gotta do it for my team. I always do everything for my team, and I’ve just kind of elevated that this year.

EA: What was it like transitioning to being a consistent starter as a senior?

GS: It made me happy because that’s what I’ve always wanted to be for my guys. More from the physical standpoint, it’s been hard to make sure my body is ready to play every day. I can’t thank the [athletic trainers] enough — they really help me out and keep me feeling great.

EA: Has being a senior changed your mentality toward the season?

GS: There’s just that slight bit more motivation. I always was a pretty motivated guy, no matter what year it is. I’ve never taken a pitch for granted, but, obviously, it’s senior year, so it’s the last ride. There’s a little more motivation but not a whole lot. We’re preached to all the time by Coach [George Valesente] to be consistent and even-keeled all the way there.

EA: How have you personally improved over your four years here?

GS: I’m a completely different player. I can’t thank the coaches enough for helping me out. I look back at my high school recruiting video, and I don’t know why they even considered me to play here. I was not even close to where I am now. We have great coaches who have a ton of experience. They’ve really helped all of us — not just me — improve a lot and win championships. We’re really grateful to have them.

EA: What is the team’s greatest strength?

GS: If we play offense, we can beat any team. We have one guy still hitting over .400 and a couple guys in the .350s. If we continue that and score runs, that’s what we’ve got to do to win baseball games.

EA: What are you looking to improve on?

GS: I think it’s just bringing all the pieces together. Whether it’s hitting or pitching, we just need to play all together as a team. Everyone does their job. That’s what Coach Val is always telling us: Just do your job. That’s what I think it has to be. Everybody individually doing their jobs is what will contribute to our success.

EA: Has the team’s strategy changed at all this year?

GS: Not really. We play for a coach who has over 40 years of experience and has never had a losing season. I think his strategy has been pretty similar over all of those years, and it seems to work. We just do what he says most of the time and that makes him happy.

EA: Has Coach Valesente been an important part of your experience here?

GS: He’s made me the man I am today, for sure. He’s taught me so many different life lessons, whether that be discipline, respect, respecting the game every single day, hustle. I’d be a different person without him.

EA: What is your outlook for the remainder of the season?

GS: I think if we put the pieces together, we can be a really good ball club. Every year we talk about potential. We’re a very old team. When we came in, it was one of the biggest freshman classes ever. We had 15 guys make the team, and, usually, it’s about four. This is a big year for us where we have to achieve our potential. That first goal is always to capture the Empire 8 championships — maybe even host this year since we haven’t done that in the time we were here. Then we want to go on and play well in regionals to hopefully make it to the series.