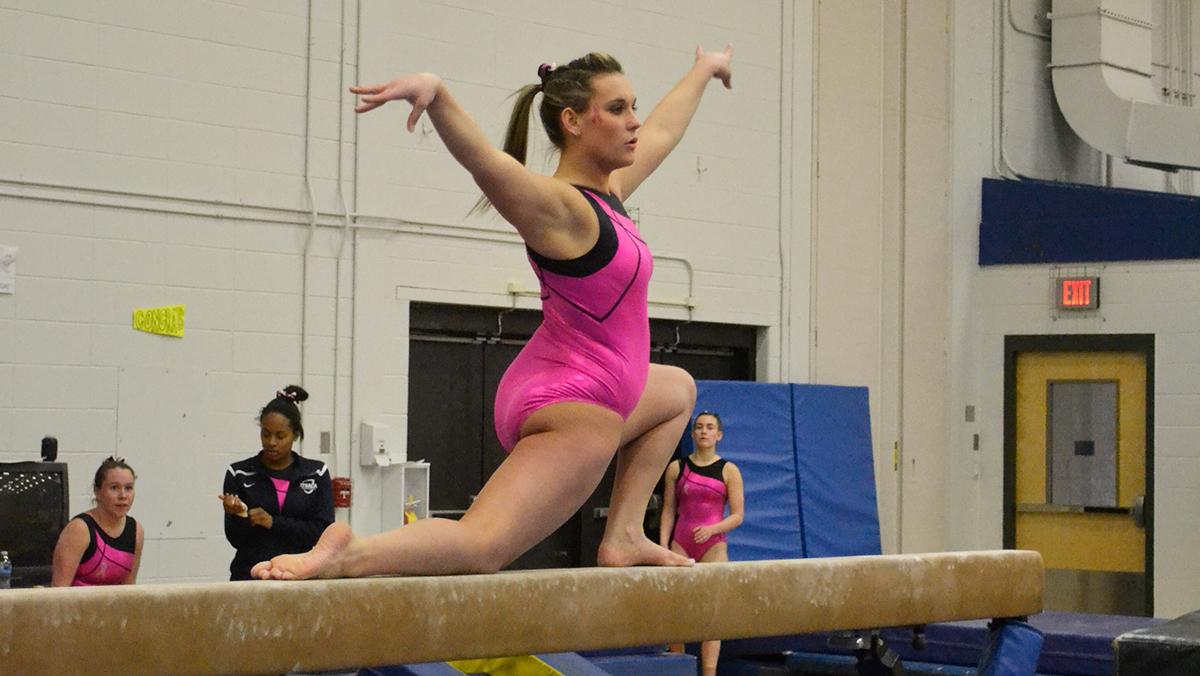 FILE PHOTO/THE ITHACAN
Senior Lynley Choate competes on the balance beam Feb. 14. During her junior year, she averaged a 9.28 on the balance beam and achieved a career-high score of 9.575 twice.
By Casey Koenig — Staff Writer
Published: November 28, 2016

Despite being hundreds of miles away from her native Arkansas, senior Lynley Choate found a family in the gymnastics team at Ithaca College.

Choate, a transfer from Arkansas State University, has made an impact for the Bombers for the past two seasons. During her junior year, she averaged a 9.28 on the balance beam and achieved a career-high score of 9.575 twice.

“They’re my best friends,” Choate said. “It’s hard to lead them in the leader role, but sometimes I have to step in and be like, ‘Hey, you need to do this,’ or ‘You need to do that. This is acceptable, and this isn’t.’”

Choate began gymnastics when she was 3 years old, training at the Jonesboro Gymnastics Academy in Jonesboro, Arkansas. When Choate was searching for colleges in high school, she said, Rick Suddaby, head coach of the Ithaca College gymnastics team, recruited her. She decided to attend Arkansas State University instead because she said she was not ready to travel more than 20 miles away from home.

While at Arkansas State University, Choate continued to train with the Jonesboro Gymnastics Academy. Halfway through her freshman year, Choate said, she decided to look into the Bombers’ gymnastics program again and took a trip to Ithaca to meet with Suddaby and get a tour of the campus.

Choate transferred to the college the following fall semester to begin her sophomore year. As an exercise science major at Arkansas State, she said, it was easy to make the transfer because she did not have to change majors.

Choate said her training schedule did not change that much. At the academy, she practiced four hours a day, four days a week and got Wednesdays off, whereas at the college, the team practices five days a week for three hours.

Choate said the team is very uplifting, even on bad days.

“If someone is having a bad day, we’ll go up to them and be like, ‘Hey, are you OK? If you want to talk about it, I’m here for you,’” she said. “The atmosphere is very positive. If someone hurts themselves, we always try to pick up the pace a little bit.”

As a transfer, she came onto the team at the same time as the nine juniors on the team. Even though she is slightly older — and has maybe one or two more years of gymnastics experience — at the collegiate level, she feels like she is a third-year gymnast like the juniors.

Junior Kelly Nash said that since Choate came in with the rest of the junior class, she has always felt like she was in their class as well. However, she has always carried herself differently.

“Maybe it’s her southern roots in Arkansas, but there is always this confidence about her,” Nash said. “She is decisive and sure of herself, and that attitude carries over to all of us. Since she’s the only senior, she assumes a leadership role on the team, and since she’s such a strong–minded, dedicated and ambitious woman, she serves as such a great role model for all of us.”

Choate competed in exhibition events sophomore year and on the balance beam during her junior year.

“She’s always been the kind of person that her teammates just love, and she sets a great example,” Suddaby said. “She’s stepped it up and taken on the kind of leadership that seniors do.”

Suddaby said Choate was able to be consistent and solid all year and hopes that it continues this year.

“Especially with the seniors, you just want to sit back and watch them be consistent,” Suddaby said. “You want to see them hit meet after meet after meet and just kind of enjoy the show, because at this point, they’re as much of an expert as they’re going to be.”

Choate said in her last season, she wants to accomplish as much as she can.

“Even if this season isn’t as good as I want it to be, I want to end it on a good note,” Choate said.

Gymnasts from all around the country bring talent to the floor