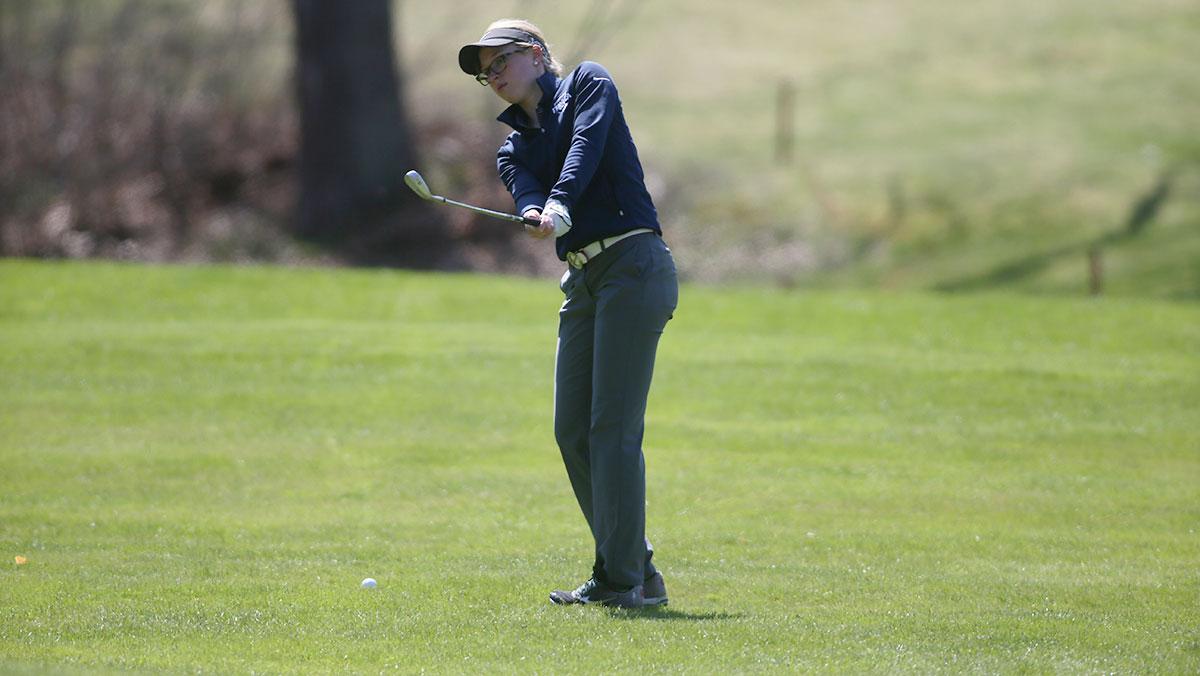 COURTESY OF MOLLY BRAID
Senior Colleen Vaughn competes at the Ithaca Invitational on April 24 at the Country Club of Ithaca.
By Reed Keller — Staff Writer
Published: May 3, 2016

After picking up track and field in the sixth grade, Vaughn, a native of Lake Hopatcong, New Jersey, continued running up through her first three years on South Hill. For her senior year, she decided to make the switch to the golf team.

In her sophomore year, Vaughn was part of a 4×800 relay team that finished fifth in the Eastern College Athletic Conference Outdoor Championships. However, despite all the success Vaughn and the team enjoyed, it was a much calmer and slower-paced activity that would highlight her senior season at the college: golf.

“Growing up, my dad had always mentioned and suggested I try golf, but I was always participating in other sports, so I never had the interest or time to try,” Vaughn said.

She said that this past summer, she wanted to spend more time with her father, so she accompanied him to the golf course.

The occasional father-daughter bonding turned into a new passion for Vaughn. Vaughn said the more she found herself on the course, the more golf became an activity she enjoyed and one at which she began to work harder.

Entering her final year on campus, Vaughn said, an advertisement for an informal meeting held by golf head coach Molly Braid caught her eye. The squad had lost three seniors the year before and found itself in need of someone to fill the void on its roster. Vaughn said she decided to email Braid about the roster openings.

“From her email, I could tell she was very interested in participating,” Braid said. “When Colleen came to meet me in person, she was excited and confident. You could tell that she not only had a passion for golf but a passion for learning and improving.”

Vaughn said her lack of experience in the sport was in the back of her mind, but she didn’t let that stop her from responding. Fortunately, Braid was open to Vaughn’s joining the team.

“I knew I had to at least try, considering how much I had come to enjoy the sport over the summer,” Vaughn said. “I figured the worst that could happen is she says no, and then I could know that I had tried instead of wondering, ‘What if.’”

Golf is a sport that takes time to master, and it is one that is often introduced to children at a later age, after they have matured and gained an appreciation for the sport’s slow pace. That’s why Braid, former director of junior golf at the Dana Rader Golf School in Charlotte, North Carolina, said a transition like the one Vaughn went through is not uncommon.

“There are other teams in our conference where golf is a second sport for everyone,” Braid said. “If an athlete has played other sports, however, they will make a great golfer because all of the athletic development they have been through.”

Vaughn said the switch was by no means easy, and there were many times after a difficult hole or round when she questioned what she had gotten herself into.

“As a new golfer playing with more experienced girls, it got discouraging at times,” Vaughn said. “I’ve gotten a lot better at keeping that feeling and other bad thoughts from creeping up on me. I just play one hole at a time.”

Despite Vaughn’s rookie status, Braid wasted no time putting her out on the green in the Empire 8 Championships on Sept. 12–13. It was there that Vaughn received some valuable coaching from veteran golfer Sharon Li ’15, a former standout on the team who is now an assistant coach, that Vaughn said helped her succeed.

“All I did during the competition was keep her calm and try to show her how to enjoy the process of golf,” Li said. “Golf is about understanding and applying what you know, controlling what you can control and letting go of what you can’t. Colleen has that mindset and has continued to improve on that mindset.”

“Colleen has really built a solid foundation,” Li said. “The way she strikes the ball has really improved from the fall to the spring.”

Vaughn has been accepted into the college’s master’s program for business administration, and she said if she stays on South Hill, she will continue her career for one more season.

As she prepares for life after college, Vaughn said she would miss track and golf equally but said her career on the golf course might not be over just yet.

“I’ll miss Ithaca Athletics as a whole because being a part of any team has been an extremely rewarding experience,” Vaughn said. “I will always miss track, but I will continue to run and golf the rest of my life, so I’m not walking away entirely.”

Each stroke counts for small women’s golf squad this season