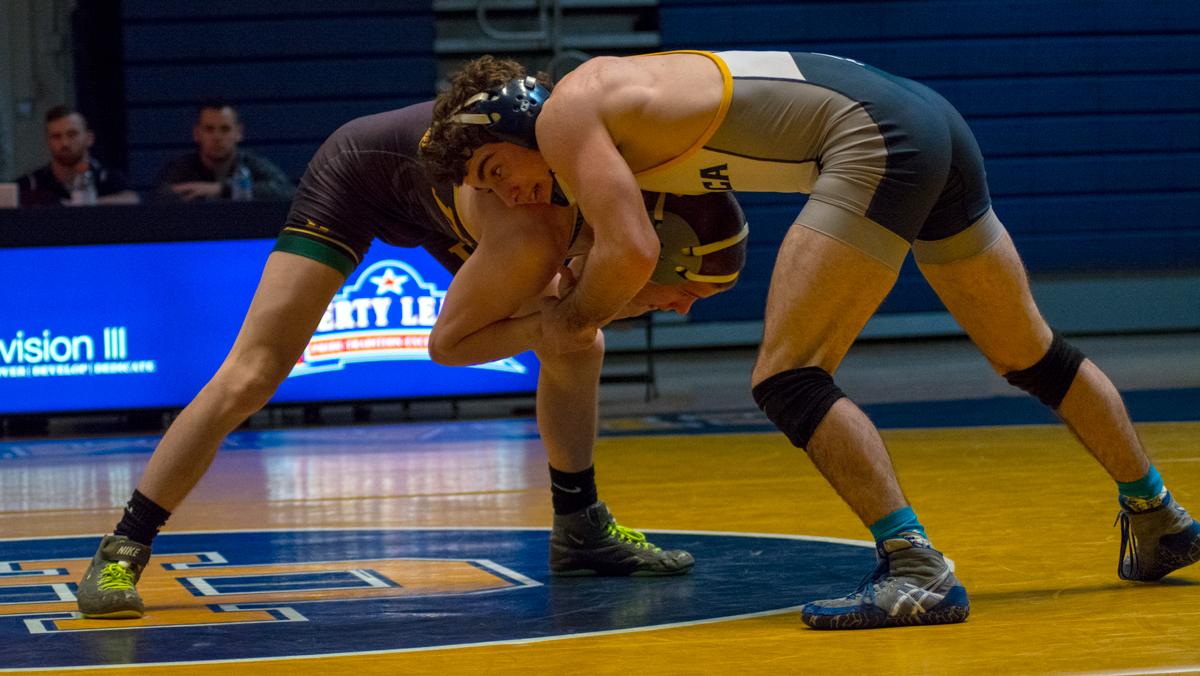 In the 2017–18 season, the Ithaca College wrestling team finished in third place at the NCAA Division III Championships. The Blue and Gold returned many key wrestlers that were national qualifiers a year ago, including senior Ferdinand Mase.

This year, Mase has started with a 7–2 record, bringing his overall record as a Bomber to 91–37. Mase is expected to reach the 100-win mark at some point this season.

Staff writer Jackson Lawrence spoke with Mase about what he is doing to get back to nationals this year, how important it is to have senior leadership on the team and what the team’s expectations are.

Jackson Lawrence: How important is having a senior-heavy team to the development of the underclassmen on the team?

Ferdinand Mase: It’s critical. I feel like our class was able to develop so much because of the seniors we had in our past. I used to wrestle with Jimmy Kaishian [’17] all the time, and he was this guy that worked insanely hard, and he was a role model to me. He was really what I wanted to emulate in everything I did, whether it was training or developing as a wrestler and as a person in general. You need to develop these freshmen in order to keep the legacy we have going right now. Also, you have to have a deep team, and these underclassmen need to be ready if someone gets hurt. We need to make sure they are super confident in stepping up.

JL: What do you think you personally, and the team as a whole, took away from the Northeast Duals tournament with two Division I teams, one being the University of Virginia?

FM: It was definitely a learning experience. Obviously, we would have liked to have done a little better, but these guys have been training full time the whole year, and we just started a month ago. The conditioning and the pace wasn’t as developed as theirs, and they were able to do little things that kind of picked us apart, but it was good to see where we were and what we needed to work on. It was a good experience because once you get back to these Division III guys, they’re not as fast and they don’t seem nearly as good because we are used to these guys that are so quick and immediately take advantage of things that are presented to them.

JL: What have you personally done this season that was different from last season?

FM: I am focusing more on technique and wrestling itself this year instead of just working out and getting my conditioning super intense. I have always been in really good shape and stronger than a lot of the guys I wrestle. Focusing on being real slick, getting my setups perfect and getting everything where it needs to be.

JL: What are you doing to try to get back to nationals?

FM: We’re doing the same type of thing as last year, but we just have to be better than we were. We brought back a ton of guys, and we only lost two national qualifiers. We also have a super talented freshman class, and we have a couple guys back last year that should have been national qualifiers. Things happen at regionals, and it is what it is, but these guys have this drive and they really want to be at the national tournament. It’s really just making sure that everyone is healthy and making sure everyone is doing what they need to do personally so that we can perform as efficiently as possible as a unit.

JL: What can you do to have a strong impact on the underclassmen this year?

FM: I feel like I am the role model for the lighter guys. The room is really split in half, so the light guys are on one side, and the heavier guys are on the other side. I always go right in the middle of the mat and make sure that I am working harder than anyone else. I want to have such a good work ethic that it is an infectious thing that people can follow. I make sure I push it to the absolute limit every time in whatever I do. I think just seeing that itself has a positive impact on all the other guys because, all of a sudden, they feel like they can work a little harder themselves.

JL: What do you think you will take away from being a Bomber wrestler?

FM: We’re a family at this point, and I’m even still really close friends with some of the guys that have already graduated. These people have really influenced me so much and cultivated my personality and my outlook on life in general. It is a true brotherhood and family. If we can make it through these four years working this hard while keeping up with grades and everything else, we can do anything. I have a lot of confidence going forward in life and whatever I end up doing. That is pretty attributable to wrestling and college itself, specifically with this team and these coaches.