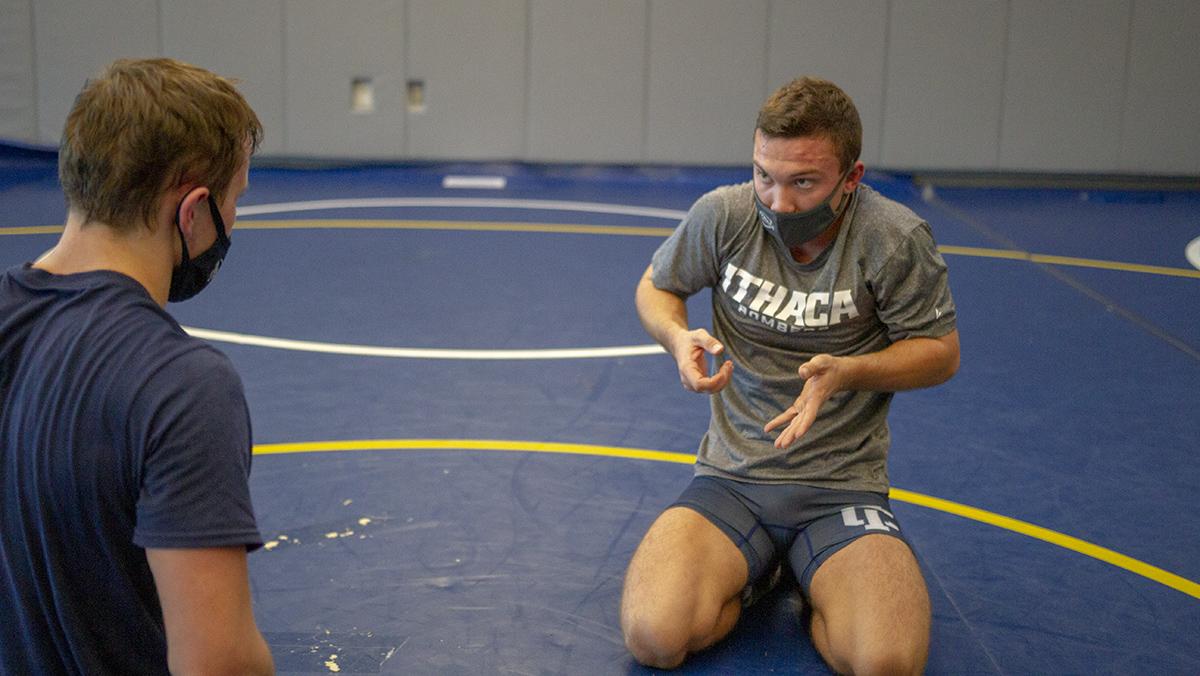 Richie Morris/The Ithacan
Senior Logan Ninos has suffered nine concussions and was told by his doctor to stop wrestling. He has remained a team captain, but has transitioned to an assistant coach for the team.
By Connor Glunt — Sports Editor
Published: November 11, 2021

When the Ithaca College wrestling team competed for the first time since the NCAA Mideast Regional Championships on March 1, 2020, the team was missing one of the best wrestlers on its roster: senior captain Logan Ninos. Ninos was not on the mat during the Ithaca Invitational on Nov. 5 and 6, and will not compete again after doctors advised him to stop wrestling due to multiple concussions.

Although Ninos will not wrestle, he has taken up a new role to stay connected with the program and the sport. The former wrestler has transitioned from being one of the first competitors to wrestle in meets for the Bombers, to being a team captain and assistant coach. Ninos began wrestling after he moved to North Hampton, Pennsylvania, in third grade and was introduced to the sport by his neighbors. He wrestled ever since then, but began suffering concussions in fifth grade outside of wrestling, and was diagnosed with his first one from wrestling in high school. Ninos has had five concussions from wrestling and nine in total. His most recent concussion came in May 2021, which ultimately led to his doctor telling him in August 2021 that he should stop wrestling.

Ninos said it took a while to realize after he got the news that his wrestling career was over. It was not until after he arrived back on campus and preseason rankings came out for the 125-pound weight class that he finally processed that he would not be competing.

“Guys that I’ve seen before, guys that I know I can beat and stuff like that, seeing them ranked kind of set in and made me realize I’m not going to be wrestling,” Ninos said. “It’s unfortunate because I know, like, I can beat these guys that are top running…But really, it’s bigger than wrestling, it’s my brain, and I need to obviously stay healthy for the rest of my life.”

According to an article from Complete Concussion Management in 2018, wrestling had the sixth highest concussion rate among youth sports with an average of 0.17 concussions per 1,000 participants. Ninos said the only constant side effect he has from the concussions is that he now wears glasses to help with his eyesight and goes to vision therapy, which is a series of eye exercises designed to improve the eye’s quality and efficiency, when he is home.

Ninos had a conversation with Marty Nichols, head coach of the wrestling team, about his future a week after he got the news from his doctors. Nichols’ first reaction was to check on the well-being of his former wrestler, but also figure out how to keep Ninos a part of the team. Now, Nichols refers to Ninos as “Coach Logan.”

Before he became Coach Logan, Ninos was the top wrestler for the Bombers in the 125-pound weight class. In the 2019–20 season, Ninos compiled a 30–11 record, and placed at events like the Ithaca Invitational, New York State Championships, New Standard Corporation Invite, Empire Collegiate Wrestling Conference Championships and the NCAA Midwest Regional Championships. Even though he has transitioned to helping the team as a coach now, Nichols said he sees similarities in Ninos’ approach to the two roles.

Even though he does not wrestle anymore, Ninos said he still applies what he has learned from the sport to his everyday life. He said wrestling is a lifestyle sport that can be physical and mental; the main things he learned were centered around determination, discipline and sacrifice, which help him succeed in all facets of his life.

Currently, Ninos, who is an athletic training major, works as an athletic trainer for the football team. Although the football team’s season is coming to a close, Ninos is still only able to attend the wrestling team’s practices on Mondays and Wednesdays. While he has come to terms with not wrestling, Ninos said that being around the team and inside the wrestling room brings back memories of doing what he used to love.

However, he still enjoys being an assistant coach and captain for his teammates. Ninos is a resource for wrestlers like senior Matt Griffin and junior Adam Wagner. Griffin wrestles in the 125-pound weight class, the same class Ninos used to, and was practice partners with Ninos during his junior year. Now, Ninos goes over shot defense and technique with Griffin, and they meet up an hour before practice to get extra work in. Griffin said that having Ninos around the team even though he is not wrestling is a valuable boost for everyone.

“He’s just brought a really good, positive attitude, and that’s part of why he’s a team captain,” Griffin said. “He always has a high morale. So even with him being busy, he’s still always there. He’s still someone that everyone on the team can talk to if they need him. He’s busy with school, so he’s not there as much. But, when he is there, he has a lot of positive energy. And anytime you need to reach out to him, no one really needs to hesitate.”

Ninos said he told his friends the news after coming back to South Hill, and Griffin said that hearing the news was bittersweet. Ninos’ reaction though, did not surprise Griffin.

“Logan’s one of my best friends on the team, and it’s a shame that something like this was to happen, but I think he dealt with it in the best way you possibly could,” Griffin said. “He dealt with it how Logan would. He’s a really mentally strong kid. And he’s a great asset to our team, whether he’s on the mat or if he’s off the mat.”

After he wrapped his head around his new role, Ninos started to provide a fresh voice for the wrestlers. Wagner said Ninos constantly checks in on everyone, texting them and asking them how they are doing. Wagner said it is refreshing to have Ninos reach out rather than a teammate he spent two hours practicing against. Wagner added that Ninos adds an element to the coaching staff that was not previously there.

“It’s nice to have a young guy that came up with you and he’s experienced everything that we’ve experienced,” Wagner said. “The older coaches, they obviously wrestled, they came to the program, but [Logan] was just here last year, he came through with the COVID-19 stuff. He’s been here and he knows how we’re feeling. So I feel like he can … really relate to us a lot better. He brings his own wrestling knowledge that’s going to be different, but I think he can be able to relate to us as current students and current wrestlers. I feel like he can kind of connect with us on that level better than the other coaches, like, on top of what he brings with his wrestling.”

When Ninos thought about the goals for his senior season, he envisioned himself as a national champion. He bested wrestlers that were in the 2021–22 rankings for the 125-pound weight class and saw no reason why he couldn’t be at the top of that list. While it is not the end to his career that he thought would happen, Ninos is looking forward to helping the wrestling team in a new way this season.

“I understand that there are things I can control and things I can’t control,” Ninos said. “Obviously, if I could control it, I would love to have a national title. Unfortunately, that’s just not how the cards fell. But, what I do know I can control is where I go from here, how I affect my teammates, how my work ethic wears off on them and how my energy is in the [wrestling] room.”