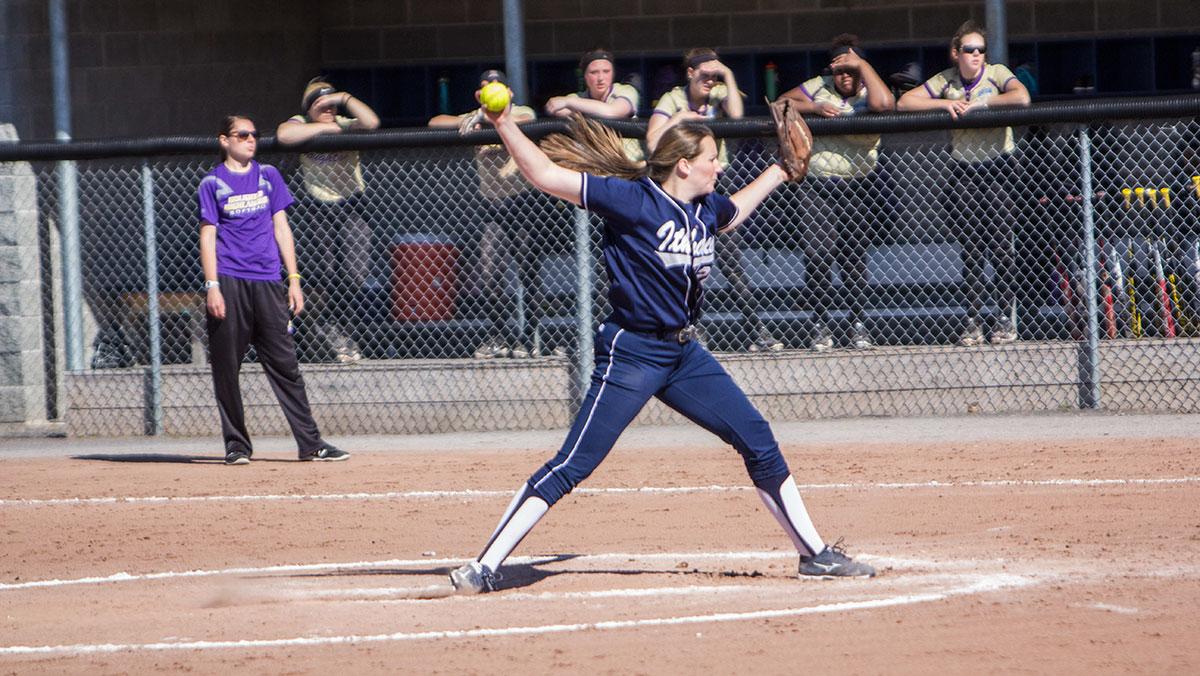 The Ithaca College softball team is currently 27–7 this season and 13–1 in conference play, and one of the players who has had a huge role in its success is senior pitcher Laura Quicker.

As of April 26, Quicker has a personal record of 12–3 on the mound with four shutouts this season. She is fourth in the Empire 8 in earned run average with 2.23 and third in strikeouts with 75. She is second in the Empire 8 with 29 strikeouts that caught the batter looking.

Quicker’s record amounts to 32 wins and 20 losses over the course of her four years as a Bomber and has amassed 219 strikeouts.

Quicker said her love of pitching began much like that of many players: in the backyard playing with her family.

“I had done a little pitching when I was younger, but I started taking pitching lessons when I was in ninth grade. Until then, I was an infielder,” she said. “My brother and dad would always pitch outside and practice, and it was something that I always wanted to be included in. … My dad and my brother are largely responsible for my development as well as my love for pitching.”

Though the pitcher is the only player recognized for earning shutout games, Quicker said she cannot take credit for them herself.

“All of the shutouts have been total-team efforts, and I wouldn’t be able to do it without the hard work of the eight other players on the field,” Quicker said. “Those are the games when we are all together and playing our best. We like to call it winning every part of the game.”

Head coach Deb Pallozzi agreed that the credit for the shutout goes to the team, but she said Quicker’s precise pitching is very helpful.

“She has a great defense behind her, and she realizes that,” Pallozzi said. “So on the days when it’s really good to pitch, she understands that and has put balls in great spots where she’s getting the easy ground out or getting the lazy fly ball out.”

Pallozzi also said she has been impressed with the way Quicker has pitched in several of the games with below-freezing temperatures.

“I mean, the real feels have been in the 20s, and we shouldn’t even be playing in those types of games,” Pallozzi said. “So for a pitcher to be able to grind out the wins like she has for us in those games and have people come in and help out — that, to me, is staggering.”

Quicker said she gives most of the credit to her teammates rather than herself solely.

“As a team, we wanted to improve on our hitting so that our solid defense had support,” she said. “As a whole, I think that there is a more positive, confident feel. The coaching staff has really instilled in us that there is no one on our schedule that can beat us, and that is the mentality that we are going into each game with.”

One of the teammates who has played with Quicker all four years is senior Casey Gavin. Gavin said she sees Quicker as one of her best friends and that being able to play with Quicker has been nothing but a great experience.

“I have so much confidence in her while she’s on the mound, and that makes playing defense behind her so much easier,” Gavin said. “Laura is my best friend, so having the ability to play the game we both love alongside her is really something that has made my four years here that much more special.”

Pallozzi said one big thing Quicker has done for the team is help develop the younger talent.

“She is a great leader in the bullpen, and over the offseason, she helped Payton [Cutting] a lot, our younger pitchers, and really took them under her wing because we can’t be with them, so she helped them develop,” Pallozzi said.

Pallozzi said Quicker has also developed her own skills and has consistently improved.

“She’s worked a lot with her mound presence,” Pallozzi said. “At leadoff, her first two starts were tough, and then mentally, she stayed real, real strong, and then her next start was dynamite.”

Quicker said for her personal goals, she is just sticking with the team goal for her final year as a Bomber.

“Our team goal for the season is to go undefeated in conference play and to be able to host the conference tournament, then continue to excel from there,” Quicker said.

Pallozzi said she has been very lucky to coach Quicker for the past four years.

“I’m fortunate I have great kids, and Laura happens to be one of them,” Pallozzi said.