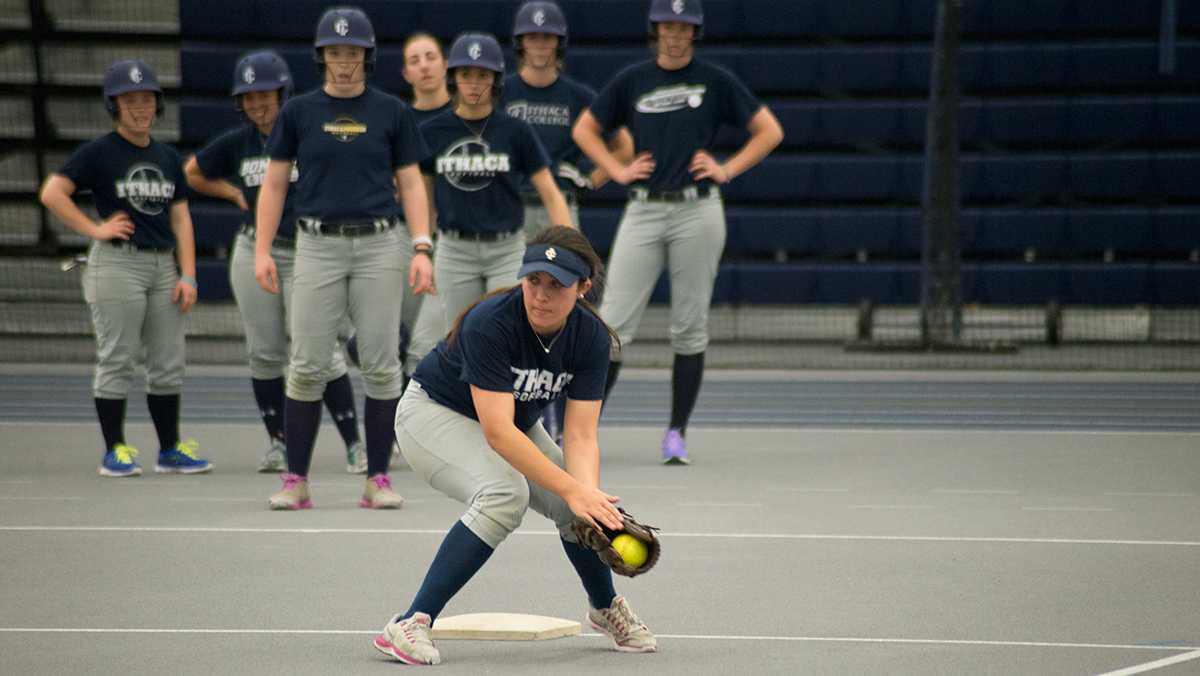 Warm weather is on the horizon, and with that comes the smell of freshly cut grass and the sound of balls cracking off bats, being driven deep out of the park.

The women’s softball team has been practicing since Feb. 2, so the Bombers haven’t had a chance just yet to get onto the field, as they have been practicing in the Athletics and Events Center as they wait for snow to melt on Kostrinsky Field.

Head coach Deb Pallozzi said the team has been working hard in the offseason and is being led by the team’s five seniors: Casey Gavin, Allison Macari, Erin McQuillan, Laura Quicker and Kelly Robichaud.

“It’s been an awesome dynamic. The five team leaders, our seniors, have done an awesome job all year long,” Pallozzi said. “In the offseason, they met and did their little workouts twice a week, and this year, in the preseason, they’re leading the group really well.”

The team had a large recruiting class this year, bringing in 10 new freshmen. However, Pallozzi said she expects to see great things out of them as well as the rest of the team.

“Our freshmen are talented and eager to learn. They’re exciting to watch play,” she said. “Our sophomores, for the most part, have taken that next step. We only have the two juniors, but they have, along with the seniors, been that support to help the young kids and bring them forward.”

Pallozzi said she has a very talented squad this year, and with that she has some big expectations for them.

“Our goal is to win the Empire 8 tournament and move on to regionals and win that,” she said. “Get to supers and hopefully, at some point, we would like to get back to the College World Series. We have the talent this year to do that. It’s just that we’re young, and we’ll see how quickly we can season up.”

Quicker said she has the same expectations for the team as her coach.

“I’m really excited for this upcoming season,” Quicker said. “The seniors have set pretty high expectations for the team because we believe that we have a good combination of experience and new talent.”

As for herself, she said, she would like to build on her 12–8 record of last year that was good for third in the Empire 8 Conference.

Quicker also said the roles of the five seniors is to help develop the younger players on their roster.

“We have taken the new players under our wing and have started showing them the level that we think is necessary to reach our goals,” she said. “I think that since we do have experiences already competing at a high level and being a part of a successful team, we will be able to successfully lead them to where we want to end up in May.”

Quicker did have one expectation for her team that her coach hadn’t mentioned.

“Personally, a goal of mine is to go undefeated in conference play,” she said. “I’m really excited to see what this team can accomplish.”

But before all that can happen, the team starts off its season in much warmer climates as the Blue and Gold travel down to Columbus, Georgia, to participate in the National Fastpitch Coaches Association Division III Leadoff Classic.

Pallozzi said it’s a very prestigious tournament that is invite-only. The top 24 of the top programs in the country are invited to play. She also compared the tournament to Division I college basketball’s National Invitation Tournament.

She also talked about how the tournament allows them to play against some very high-level competition, which will get them ready for their upcoming season.

Participating in this tournament will bode well when conference play comes around. Pallozzi said the Empire 8 has grown stronger and will be a very competitive league.

Pallozzi said the Blue and Gold are ready for the challenge and ready to take on any of the teams in the league.

“We have great pitching. I think we have kids that can really stroke the ball in all different programs, and whoever wins the Empire 8’s is definitely going to be able to compete at a high level at the regional and super regional, and they’ll get to move forward,” she said.

Pallozzi said she feels the easiest way to have a successful season is to start with the basics.

“We have to pitch well, we have to get timely hits, and our defense has to be solid, and if you’re that way you’re going to be in the mix in the end,” she said.