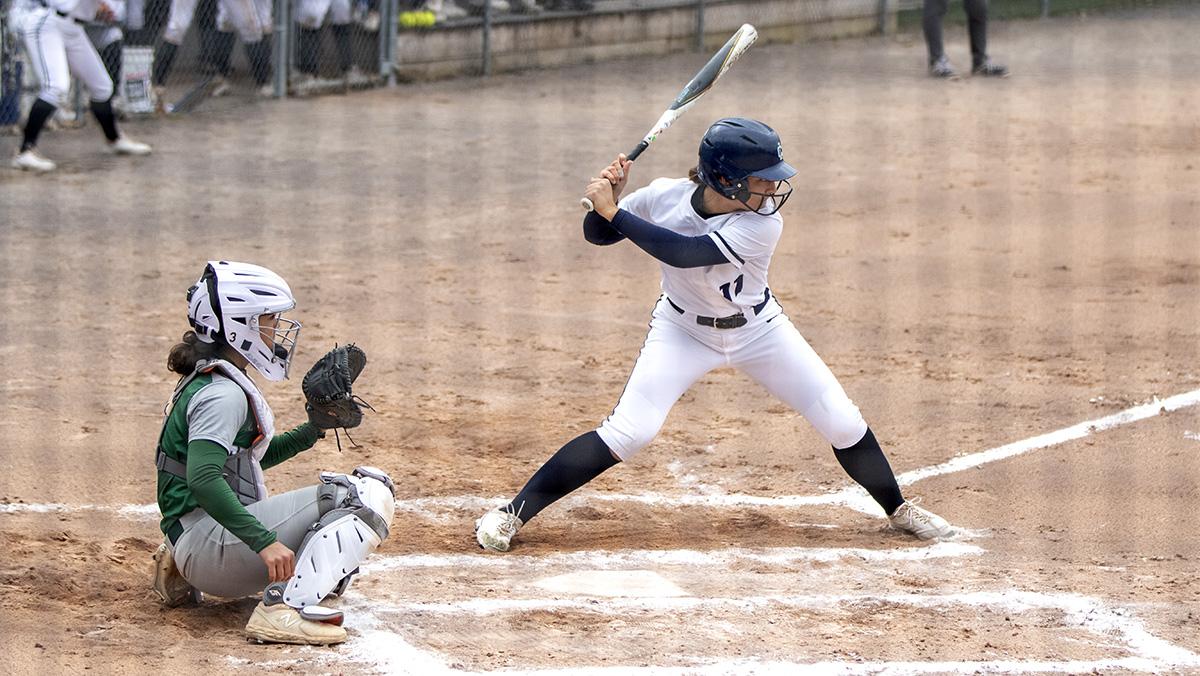 The Bombers took both games of the doubleheader against the Thoroughbreds, recording 7–0 and 10–2 victories. Junior pitcher Riley Piromalli and freshman pitcher Anna Cornell each picked up wins in the circle as the Bombers’ offense scored 17 runs on the day.

Game one was highlighted by good defense and a big sixth inning where the Bombers put five runs across the plate to run away with the victory. Junior infielder Allison Dell’Orto and senior outfielder Julia Loffredo each had two hits and an RBI and freshman infielder Sela Scheinman recorded two RBI. Piromalli had a great day in the circle striking out nine batters and allowing only four hits.

The Thoroughbreds got their first runner into scoring position with a leadoff double in the top of the first. In the next three batters, Piromalli struck out two and calmly fielded a bunt to end the inning.

Sophomore outfielder Hudson Hassler started the bottom of the second inning with another walk. Senior outfielder Daniella Mulvey followed with a double to left field to get runners to second and third with no outs. Junior shortstop Tava Kasper hit a ground ball to shortstop with two outs but beat the throw and Hassler scored the first run of the game.

Piromalli continued to throw well in the circle by striking out five batters, allowing three hits and no runs over her first four innings.

Dell’Orto led off with an infield single, beating the throw to first base. Dell’Orto stole second base on the next pitch and advanced to third on an errant throw. Loffredo drove in the run on a hard-hit single to centerfield to give the Bombers a 2–0 lead in the bottom of the fifth inning.

Piromalli threw clean innings in the fifth and the sixth to keep the Thoroughbreds scoreless. The Bombers got a big rally in the bottom of the sixth inning as Kindblom doubled to left field scoring Kasper. In the next at-bat, Dell’Orto tripled to right field. Freshman infielder Sela Scheinman, hit a two-run single to left field to extend the Bombers’ lead to 7–0. This would hold as the final score, as the Bombers closed out the contest with a scoreless seventh inning.

The Bombers continued their productive day in game two, defeating the Thoroughbreds by a final score of 10–2. Kasper was 3-for-3 at the plate with a double, a home run and six RBI for the Bombers in the game.

The Bombers kept up their strong defense going into game two with Scheinman and Kasper each fielding sharply hit balls in the first couple of innings.

Scheinman and junior outfielder Kailey Collins both started the second inning off with walks to get the first two batters on, and Mulvey was hit by a pitch loading the bases. The Bombers got down to two outs and Kasper roped a double to left-centerfield driving in two runs. Kindblom followed up with a two-run single driving in Kasper and Mulvey to make it a 4–0. The Bombers continued their two-out rally loading the bases again, but popped out for the final out.

The Bombers looked to extend their lead in the bottom of the fourth inning getting runners to first and third with one out. However, the Thoroughbreds turned a double play on a line drive hit by Dell’Orto.

The Thoroughbreds threatened in the fifth inning by getting a runner to second base with one out. While Hassler went full extension making a diving catch on a ball hit deep in right field for the second out, however, the Thoroughbreds hit back-to-back RBI singles to make it a 4–2 game.

Loffredo and Scheinman each walked to start the bottom of the fifth. After advancing to third on a sacrifice fly, Loffredo scored on a passed ball while moving Scheinman to third.

The Bombers proceeded to load the bases for Kasper to crush a grand slam over the left field wall, giving the Bombers a 9–2 lead heading into the sixth inning.

Piromalli entered the game replacing freshman pitcher Melody Kappel to close out the final two innings. She fielded hard-hit ground balls for the first two outs and struck out the last batter of the inning.

The Bombers loaded the bases in the bottom of the sixth inning with no outs. Mulvey walked to bring in a run to make it a 10–2 ballgame putting the mercy run rule into effect and ending the game.

The Bombers won emphatically in both games to bring their record to 17–10 and remain undefeated in conference play.