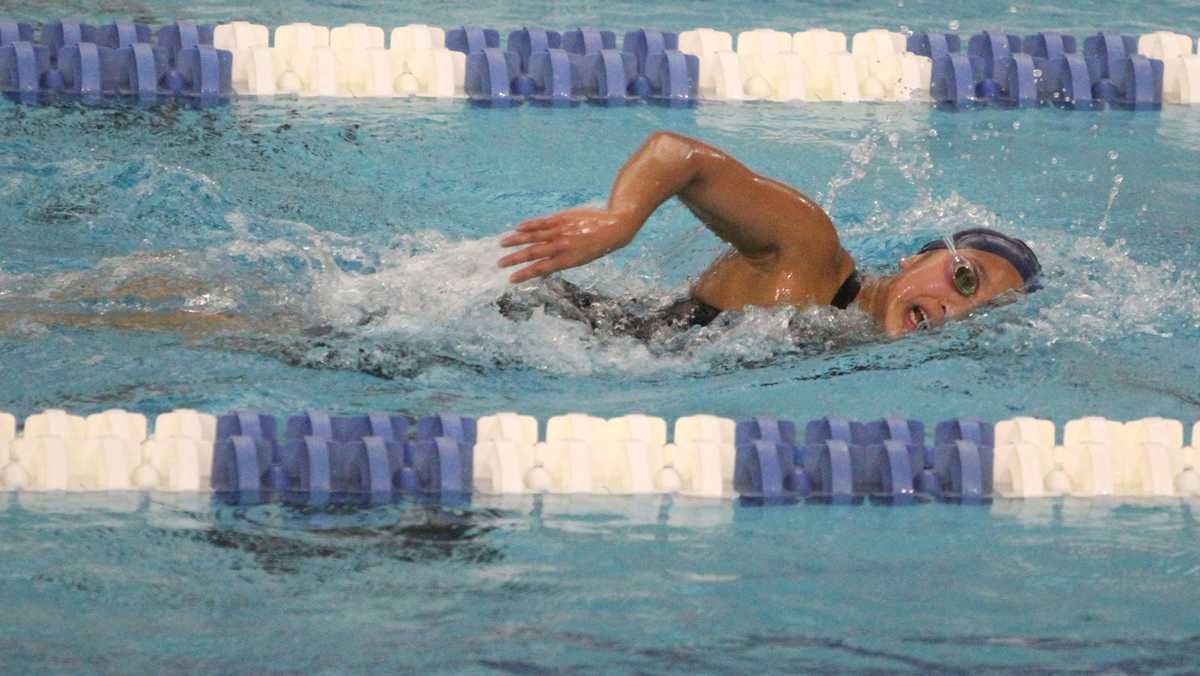 At the Bomber Invitational on Dec. 2, sophomore Morgan Hoffman-Smith broke the Ithaca College women’s swimming and diving program record for the 1,650-meter freestyle with a time of 17:35.44. The previous record was set by Kelly Murphy ’12, whose original record-breaking time was 17:42.48.

Last season, Hoffman-Smith finished second at the Liberty League Conference Championships in the 1,650-meter freestyle. At the same meet, she finished in fourth place in the 500-meter freestyle and in fifth place in the 200-meter backstroke. So far this season, the women’s swimming and diving team is 5–1 and is hoping to win a Liberty League Conference championship.

Sports Editor Dani Pluchinsky spoke with Hoffman-Smith about her record-breaking performance, how she hopes to continue to improve and the impact her teammates have had on her.

Dani Pluchinsky: What have you improved on from last season to this season?

Morgan Hoffman-Smith: I think the biggest thing with this season is I am so used to everything now, and I’m not going through any new movements. I got the rituals down, and I’ve been working really hard on things that I wasn’t able to do last year just because I was new. Really knowing where I need to work on things, especially like lifting and knowing the practices that are coming and working hard on them instead of just trying to adjust because I’m already adjusted.

DP: Can you take me through the moment of when you realized you broke the program record?

MHS: I was going into the race kind of blind and not really knowing how I felt about it. It was the last day of the meet, so I was really tired. I wasn’t really expecting to break the record, but it was a goal for that meet just because up to that point, I was on the track to break it. So I finished at the wall in third place, and I was looking around and catching my breath, not really realizing that I had done it until my teammates started screaming, and they were all happy. It was a shock moment, but I was also relieved because I have wanted that since last year, so it was a relief to do it this early in the season.

DP: What is your goal for this season?

MHS: This season is definitely to claim first place at Liberty Leagues. There are a lot of new, fast freshmen coming up in our conference. So I think right now, I’m in first place for the mile, but definitely taking that first place is the end goal.

DP: What are you going to work on during this season’s winter break training trip to ensure you have a successful second part of the season?

MHS: That was a big question that was asked; ‘I dropped a lot of time, and I beat the record, so now what?’ Starting a couple weeks ago, a little before the Bomber Invite, I started practicing with the guys’ team just to get a little bit of a different workout and to challenge myself more. That’s something, going forward, it’s something I’m going to keep doing. My coach and their coach have discussed doing two or three days with the guys’ team. I’m just trying to challenge myself more because they have a lot more distance swimmers than us on the team, so practicing with them and also working the hardest I can and pushing myself every day. Knowing that leading up to this, I had pushed myself, but going forward, I need to push myself harder to get above and beyond where I am now.

DP: How much of a role have your teammates and coaches played in your success?

MHS: I definitely would not be where I am today without my teammates. They motivate me every day, and they support me. Having them on the side of the pool motivates me during the race. They’re there for me every day, good days or bad days. My coach, Paula Miller, has been a huge impact on my swimming here at Ithaca College, and I would not be where I am today without her. She’s an amazing coach that has taken the time to really embrace me as a person and one of her athletes. She pushes and supports me just as hard as all of my teammates do.

DP: How has swimming here at the college helped you mentally and physically become a better swimmer?

MHS: I just think the environment of a collegiate sport is so different than doing club and varsity back home. We’re much closer than I was with my team at home because I think we do have such a long season and that we know that we wouldn’t be where we are today without each other. Mentally knowing they are always there for me has made me become not just a better swimmer but a better person in general. Having that support system is really nice.