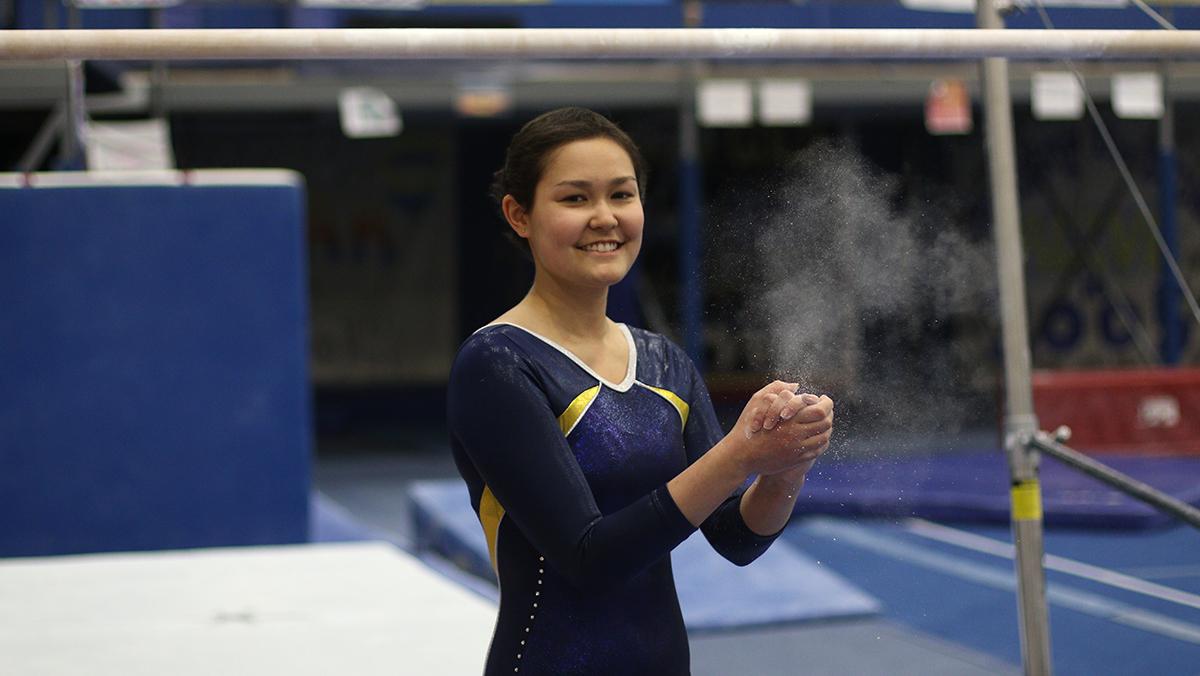 Avril crowe/THE ITHACAN
Sophomore Rachel Lee is training again after taking last year off from school and gymnastics to receive treatment. She is starting with the basics and working her way up to the harder skills.
By Madison Bess — Staff Writer
Published: February 15, 2017

During her freshman year in 2014–15, sophomore Rachel Lee qualified for the national championship and earned All-American status on the balance beam. But the following year, what should have been her second year on the team, did not go as planned.

It began with the operation to remove her wisdom teeth in the summer of 2015. The doctors had given her Amoxicillin for the pain, but she had an allergic reaction to it. She was then put on steroids, but after she was taken off the steroids, she was still feeling sick.

During the fall of 2015, Lee said, she was still not feeling like herself, and after experiencing headaches, shortness of breath and fatigue, she knew something was off.

She went to a doctor and was told that there were leukemia cells in her blood — she was diagnosed with acute lymphoblastic leukemia.

Lee took last year off from school and competition to receive treatment, and now she is back to both school and gymnastics, taking on that six-inch piece of wood again.

She knew she wanted to come back gymnastics as soon as the doctors cleared her, she said.

“I knew I did want to come back,” Lee said. “But there are days that are tougher than others. You sit there and say, ‘I don’t want to do that today.’”

She is still undergoing chemotherapy once a month and is considered in remission, but she is allowed to practice with the team even though she will not be competing this year. Lee said she takes a week off after receiving treatment due to the steroids.

Lee said she is very tired on those days following treatment. She takes anywhere from 12 to 26 pills each day — some types of pills every day and other types just once a week. She also gets monthly IV injections, which she started in June and will continue for two years.

But not coming back to gymnastics was never a consideration for her — it’s a sport that she said has shaped her both mentally and physically.

“I couldn’t imagine life without it,” she said. “It was difficult not seeing my friends every day.”

Although Lee said she is enjoying being back with the team, she is not back into the full swing of things yet. After having taken a year off gymnastics, her body has changed.

“I lost a lot of muscle mass,” she said. “Having to get back all the skills I had before is harder. Watching everybody else being at the place they are makes me want to work harder so I can be ready for my season.”

Lee is a graceful gymnast who flows from one move to the next. Coming back, she had to learn her skills over again, back to the basics she was learning at 8 years old.

“She kind of had to learn to walk again,” head coach Rick Suddaby said. “It was hard, but she has gotten into the groove. Every day she is doing something new. It is not competitive, but it is a big step forward for her.”

Suddaby said they developed a training plan for Lee based on the USA Gymnastics level system where each level has different skill goals. Lee is slowly progressing up to the harder skills as she gets her strength back, but she said she is still not close to competition level.

“Right now we aren’t really doing anything that pounds,” Suddaby said. “It is hard to know yet how easy or difficult that is going to be for her.”

He said Lee has had a tremendously positive impact on her teammates and her coaches.

“She is inspirational doing things that are really simple, but she is inspiring her teammates,” Suddaby said. “Her teammates love having her back again.”

Despite having to work to regain her strength and skills, Lee said she has been positive and mentally tough through it all.

“I guess you have to look at the long term,” Lee said. “It’s not going to happen like that. You have to work towards it and be happy for everyone else. It’s going to be slow and steady, and you can’t rush it.”

Suddaby said one thing that is hard is that Lee doesn’t get the attention from him that she deserves. The reason for this is she is not competing and he has to devote the majority of practice time to helping the team get better. However, he said the team makes sure to support her during her comeback.

“We have done things to point out her comeback,” he said. “We sat the team down in the fall and showed them her All-American routine on beam from freshman year to keep the spark alive and the dream alive.”

Last season, the team developed the phrase “Rachel Strong” and said it at the end of practices and meets. By saying this, the team was able to keep Lee’s presence with them, even when she was going through treatment and not on campus.

“At the end of lifts, we would say ‘Rachel Strong,’” junior Hannah Donnelly said. “The fact she went through that and is able to come back is truly amazing.”

Donnelly said composure is one of Lee’s strengths in the sport of gymnastics, one that she has always had.

“I loved competing with her on beam freshman year because she was calm and it made everyone calm,” Donnelly said. “Her composure really influenced the team, and she makes everything look easy. It helps with team dynamic.”

Suddaby said Lee isn’t stagnant. She is going in a direction, and she has something to look forward to.

“She is just an inspiration,” Suddaby said. “She just is. We will get to focus on it a little more because our next invitational is our cancer meet. She is definitely inspiring her teammates, and she is never down. She has more reason than anyone else [to be down], but she is positive. She doesn’t outwardly resent any of this. And that, to me, is incredible.”