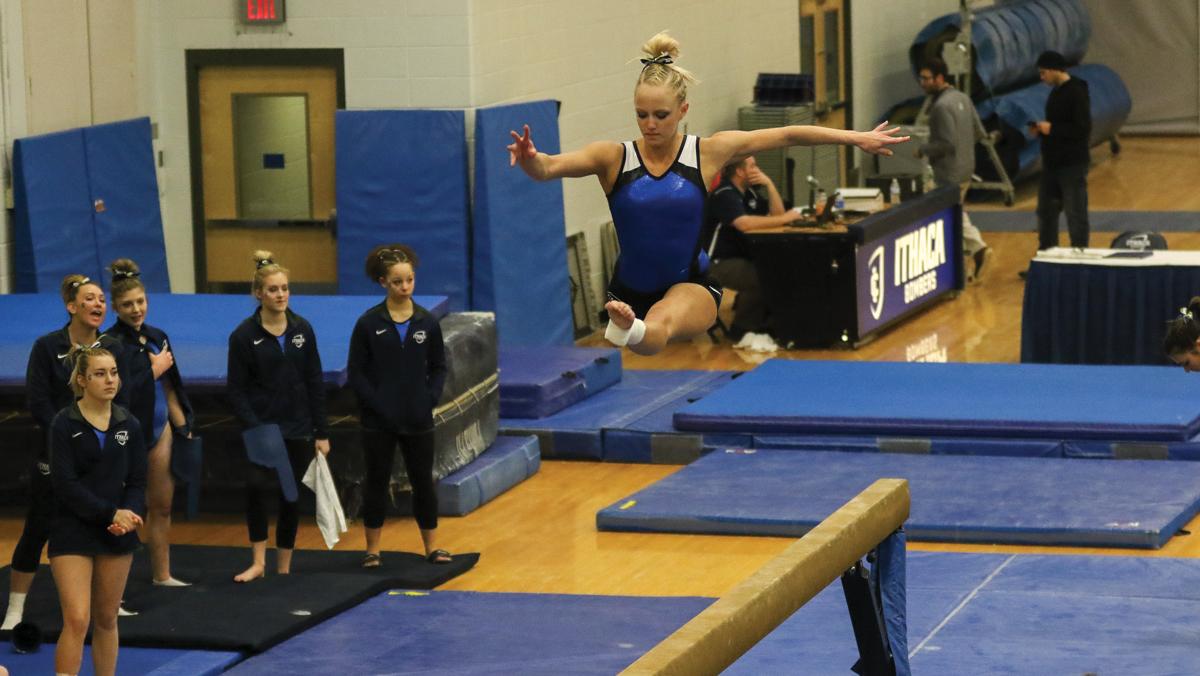 After being introduced to gymnastics at a mother-daughter class when she was 2 years old,  sophomore Paige Landes, a gymnast at Ithaca College, developed into the second–best balance beam gymnast in Division III.

Landes said her success this season stems from hard work.

“I’ve been really focused on making my routines the best they can be,” Landes said. “The support I receive from my teammates is also great motivation.”

Not only has Landes become one of the best balance beam gymnasts in the country, but she also earned her way into the college’s record books. Landes tied Stephanie Smith ‘04 and senior Hannah Donnelly for the best score recorded on the balance beam with a 9.800 on Jan. 27.

Landes said aiming to be No. 1 is only a small piece of her inspiration.

“I don’t really feel any extra pressure because I’m not thinking about that,” Landes said. “Going into each meet, I know I have to just go in with a mindset of ‘Go in and hit that routine and whatever happens, happens.’”

“She’s a very pleasant and consistent person, and that translates to her sport,” Suddaby said.  “She trains consistently, performs consistently and because she’s a pleasant person in our performance sport, she’s fun to watch.”

Landes, however, credits her success to her teammates’ influence.

“My teammates are who really pushed me to get to where I am,” Landes said. “Everyone’s very encouraging at meets, and even at practice, so I know that if it’s been a rough day and I don’t want to do much today, I know I can count on them to get me through that practice.”

“Paige definitely impacts the team in a positive way,” Donnelly said. “She has an amazing work ethic that we all admire. She always gets her work done in the gym, and we all trust that she is going to hit her routines when it counts. I train beam with Paige, and her composure at meets helps the whole beam team to perform at our best.”

The gymnastics team is currently ranked fourth in the nation, averaging 187.438 points.

Grabber said Landes always had the potential to be successful.

“Her skills are very good, they’re clean, they’re big, they’re exactly what the judges are looking for,” Grabber said. “I don’t think Paige knew it yet, and had the confidence she could be this good, but we definitely saw it in her and we tried to give her the tools to get her here.”

Landes’ success has been building up all season. At the West Chester Quad Meet, she finished in seventh place on the balance beam with a score of 9.675. She followed that performance with a 9.650 score against SUNY Brockport, and when the Bombers faced SUNY Brockport again, she finished third.

Landes said her new ranking will help her perform better at meets.

“I was definitely more confident in myself starting off the season,” Landes said. “I didn’t know where it would take me, but it’s really exciting because having that confidence really boosted how I felt at a meet and I wasn’t nervous going into it. I didn’t expect to get to where I am, but it’s exciting now that I’m here.”