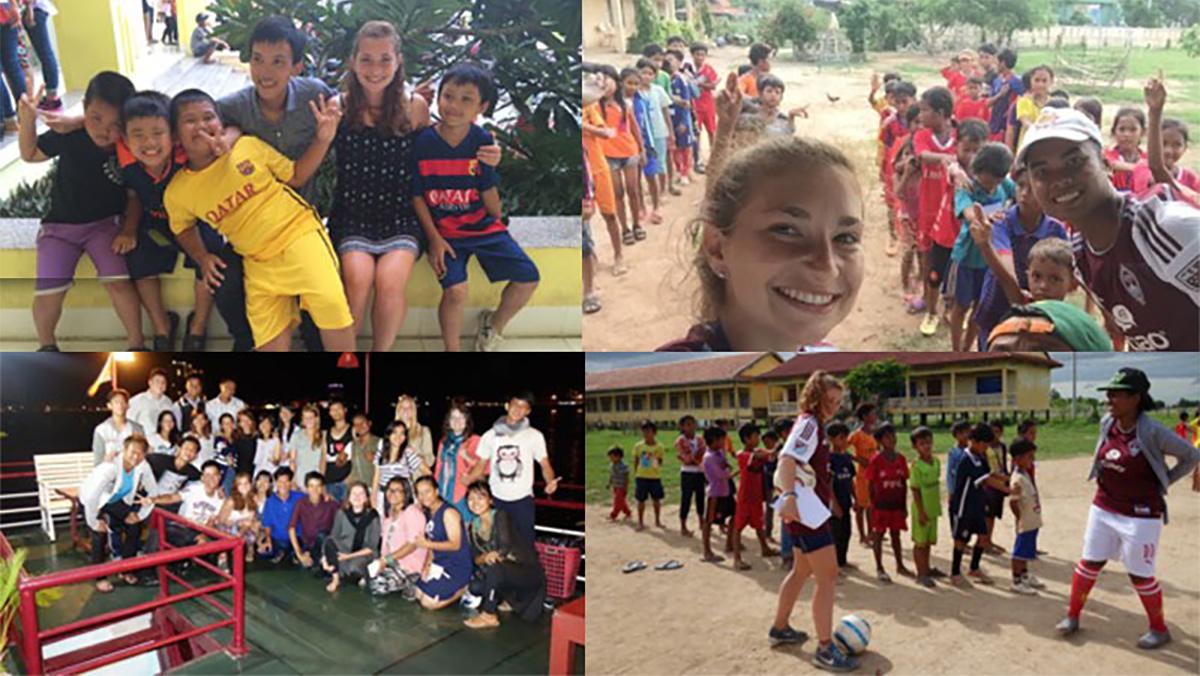 On a soccer field under the midsummer sun in Cambodia, sophomore Shoshana Bedrosian noticed a timid Cambodian girl named Naret whose skills on the field were at first masked by her lack of confidence. But after Bedrosian gave Naret her own cleats so she could have proper soccer attire like the other players, her shyness began to fade away.

“From that moment, I felt an instant connection,” Bedrosian said. “Although this was a simple gesture, I hope it will forever inspire her to never give up on something she loves.”

Bedrosian devoted three weeks of her summer vacation to coaching underprivileged children like Naret in Cambodia and Vietnam through a program called Sports for Social Change.

Sports For Social Change runs a free soccer camp called Changing Lives and Encouraging Ability Through Soccer. The camp runs for 12 days, during which the volunteers spend six days in Vietnam and six days in Cambodia coaching children. The aim is to use sports to break cultural, gender and wage barriers as well as to lessen border tensions between the two countries.

“Because soccer is a universal language, it made it easier to convey these important lessons to my campers,” Bedrosian said.

Bedrosian said she had to learn how to adapt to the different cultures, including making sure her clothing was modest and being respectful while the families prayed multiple times a day. She also said the amount of meat in the diet — including eating every part of an animal — was a different experience for her.

Bedrosian became involved in this program through a personal connection with Sylvia Murray, SFSC co-founder and program director. In 2012, Bedrosian attended a Union for Reform Judaism summer camp in West Stockbridge, Massachusetts, called Crane Lake Camp, where Murray was her camp counselor. When looking for volunteers for the CLEATS camp, Murray said she knew Bedrosian would be the perfect fit.

“The entire time I have known Shoshana, I have seen her as a fantastic leader, an engaged learner and a fun, supportive and open friend,” Murray said. “For this program in particular, I also thought she’d be great because she’s an incredible soccer player, and having her as an example of a strong female player was very powerful in Vietnam and Cambodia, where women are not typically encouraged to play sports.”

Murray said their programs, like CLEATS, are not only an important learning experience for the children attending the camps, but also for the coaches from the United States, Cambodia and Vietnam.

“Our program’s aim is to guide youth in identifying, understanding, addressing and transforming personal, interpersonal and structural conflicts,” she said.

Once arriving in Vietnam, all American, Cambodian and Vietnamese volunteer coaches had to participate in a six-day orientation session to familiarize themselves with the communities they would be coaching in as well as the coaching methods of the CLEATS camp.

Each camp lasted for five days, and on the sixth day, the campers participated in a tournament. Each day consisted of a morning and afternoon session and a snack break with food provided by CLEATS. Usually, the younger children would attend in the mornings and the older kids in the afternoons. Bedrosian said some kids enjoyed playing so much that they would attend both sessions. The two camps took place in Tra Vinh, Vietnam, and Prek Chrey, Cambodia.

The coaching staff was made up of 20 college students consisting of nine Vietnamese, nine Cambodian and two American coaches, along with seven Sarus staff members. The coaches were paired up in groups of three people with one coach from each country per group.

“It was really interesting because the camp staff was really worried about cultural differences in the beginning, but the Vietnamese and Cambodian coaches got along so well,” Bedrosian said.

Bedrosian said their cooperation was important for the camp to run smoothly due to the language barriers in the countries. She said translators were provided for the coaches to communicate with each other.

“One of the hardest things to deal with was the language barrier,” Bedrosian said. “Most of the kids could only say their ABCs, count to 10 or say hi [in English].”

Murray said the language barrier did not affect Bedrosian when she was coaching the children.

While in Vietnam, Bedrosian and the CLEATS staff stayed in dorms at Tra Vinh University. However, when the team got to Cambodia, the living situation changed greatly. Bedrosian said that in Prek Chrey, all of the coaches and staff stayed with Cambodian families in three traditional Cambodian stilt homes.

“We had no windows, no running water, and we had to take bucket showers and use squatting toilets,” she said. “We had to wash all of our clothes in buckets. The water we bathed ourselves with was rainwater. In both Vietnam and Cambodia, we could only drink bottled water.”

Though this was not an ideal living situation, Bedrosian said it helped her learn about the differences between the regions, which was one of her favorite parts of the trip. She said she was able to fully immerse herself in both cultures.

“She is always very energetic and positive with a smile on her face,” Crowell said. “I can only imagine how much the kids that she was working with loved her.”

Though Bedrosian’s trip has come to an end, she will continue to play soccer this season at the college with a new motivation.

“It has encouraged me and inspired me to love the sport even more, and when I’m playing in college, I am playing for them,” she said. “Soccer means so much to them, and it has left such an impact on me.”