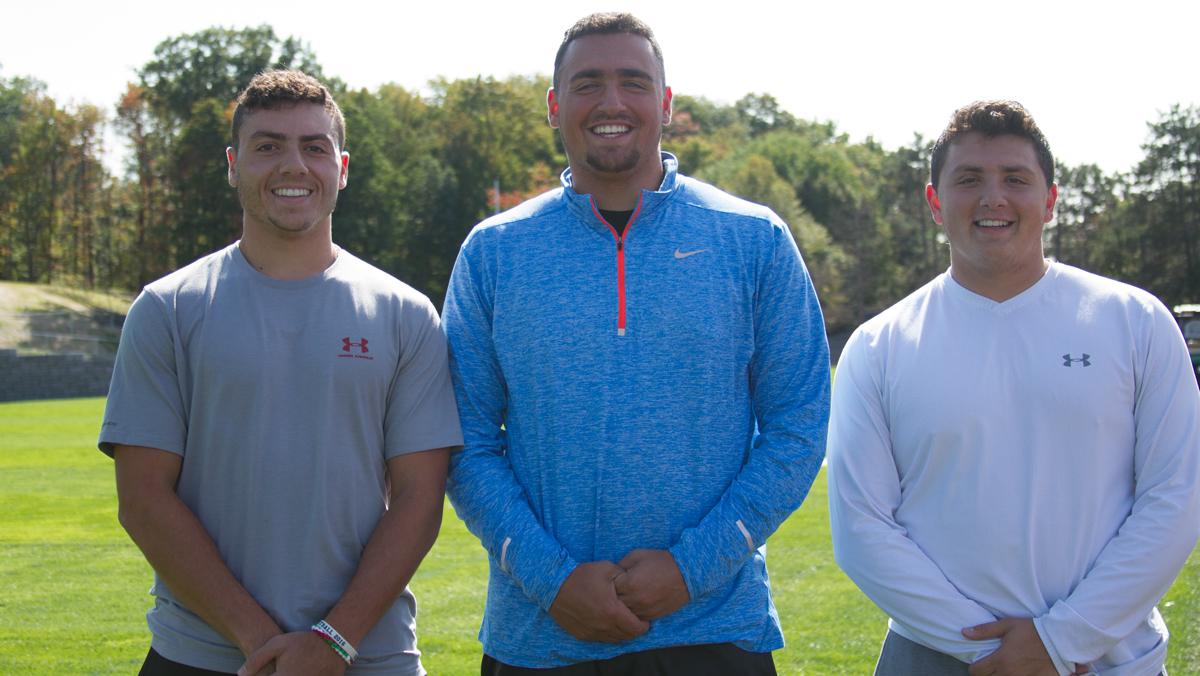 MAXINE HANSFORD/THE ITHACAN
From left, sophomores Ben, Anthony and Mike Scarpa all play on the football team together. Ben is a wide receiver while Anthony and Mike are offensive linemen.
By Matt Clement — Contributing Writer
Published: September 20, 2017

Growing up as triplets, sophomores Anthony, Ben and Mike Scarpa always had a best friend and someone to stick up for them. Once they started playing football, this translated onto the field.

Football head coach Dan Swanstrom said he likes having siblings on the team because it helps with the team culture and chemistry.

“It’s a good thing,” Swanstrom said. “It means we have a good culture and when an older sibling comes, the younger one wants to be a part of it.”

The triplets starting playing football on a Pop Warner-Youth League Team that their father, Michael Scarpa, was the head coach of. As the brothers got older, he moved into an assistant coaching role, and he stopped coaching once the brothers reached high school

“I would always make sure I wasn’t showing favoritism towards them, so I probably worked them a bit harder than all the other kids,” Michael said. “It was fun. It was exciting to be on the same field as them — good to be out there for the victories. It was definitely a bonding experience.”

Ben started playing at the age of 7, with Anthony and Mike joining him two years later. They had to wait two more years to play due to weight restrictions.

The triplets also chose to play at the same college to make it easier for their family to travel to games. By going to the same school, their parents wouldn’t have to choose whose game to go to.

“Playing together is also something that we’ve always enjoyed,” Mike said. “It’s nice all being on the same side of the ball at all times, so we can keep that going.”

By playing in college, the triplets are carrying with them a family tradition of football that has been in place since their grandfather played football during his high school years. Michael and his two brothers grew up playing the sport, and the triplets’ mother, Linda, had four brothers who played.

Playing football helped them develop a sense of teamwork both on and off the field, Anthony said.

“On the football field, you can’t do it by yourself,” he said. “You have to have people you can trust to help you succeed. If you need help, it’s there, but you have to trust everyone on the field.”

Linda said that although her sons lived in the same house and were brought up the exact same way, they each have their own strong personalities. She said each brother is able to excel individually and work together.

On the team, the triplets blend in with the rest of the players as three different individuals, Swanstrom said. They also have their own social groups and personalities within the team.

Ben plays wide receiver for the Bombers, and Mike and Anthony are offensive linemen, with Anthony making the switch from tight end to offensive tackle for college.

For their freshmen season, the triplets were on the JV team and are now on the varsity team. The only triplet who has played in a game so far is Anthony, who had one tackle against St. Lawrence on Sept. 16.

“Anthony’s in a unique situation moving from tight end to offensive tackle with the change, and he’s embraced it and put on weight,” Swanstrom said. “Mike’s just looking to get healed from his shoulder surgery, and Ben just had a tremendous game at Cornell when we scrimmaged them.”

During high school, Ben was utilized at six different positions and chose to focus on the wide receiver position for college because he said he enjoys running with the ball and the freedom the position would give him.

Anthony had a different route when learning a new position. As tight end, he had to learn the playbook, whereas for offensive tackle, he had to learn to focus his entire game plan on protecting the quarterback and running back.

Anthony and Ben were Catholic Conference All-Stars for Malden Catholic High School in Malden, Massachusetts, and Mike was awarded the team leadership award senior year. All three are majoring in business administration at the college.

The brothers began the recruitment process after former head coach Mike Welch approached their high school coach about Anthony. Upon realizing he was one of triplets, he began recruiting all three of them.

“That was one of the big things for why we chose here — because they wanted all three of us,” Ben said.

Playing on the same team, Ben said, has allowed them to develop more of a friendship rather than just being siblings.

“We don’t really see it as brothers unless it’s a family function,” he said. “I just see them as my friends.”

Football picks up first win of the season Sept. 16

Football goes down 31–0 against SUNY Brockport