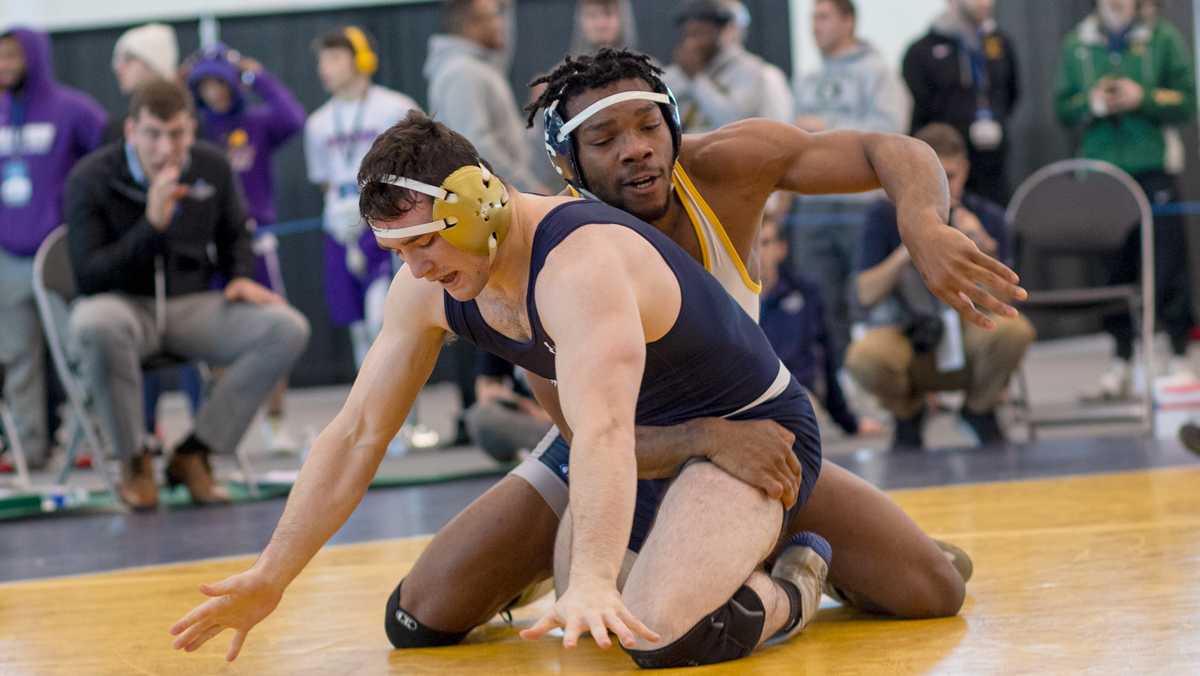 In 2019, then-freshman Eze Chukwuezi finished third in his first NCAA Mideast Regionals. Now, as a sophomore, Chukwuezi is a regional champion and is one of the top wrestlers in the country in the 184-pound weight class.

The No.17-ranked Bombers will be sending six wrestlers, including No. 10 Chukwuezi, to the NCAA Division III Wrestling Championships in Cedar Rapids, Iowa, on March 13 and 14. In addition to Chukwuezi, freshman Travis Jones, — who won the 133-pound weight class and was named Most Outstanding Wrestler at the regional meet — No. 6 graduate student Austin Whitney, sophomore Logan Ninos, senior Ben Brisman and redshirt sophomore Sam Schneider all qualified for nationals in their respective weight classes.

The team tied for first with No. 9 The College of New Jersey at regionals and had wrestlers place in the top eight in nine of the 10 weight classes. Both senior Tito Colom and No. 8-ranked junior Jordan Wallace placed sixth in their respective weight classes. Graduate student Dalton Elias came in seventh in the 285-pound bracket.

The South Hill squad wrestlers were not the only ones who brought trophies back to Ben Light Gymnasium after regionals. Head coach Marty Nichols was named Regional Coach of the Year at the tournament. The Bombers’ assistant coaching staff also earned the Assistant Coaching Staff of the Year Award.

Sports editor Arla Davis spoke with Chukwuezi about his success at the 2020 NCAA Mideast Regionals along with how he and the rest of the South Hill squad are preparing for the national championship.

Arla Davis: This was your first NCAA Mideast Regionals win. How does it feel to improve from third place last year to first this year?

Eze Chukwuezi: [It feels] pretty good. It’s a different level of dominance going into this year than it was last year. Being in third is nice, but you barely kind of scraped by. When you get first, it definitely makes you feel much more confident going to the [national] championship again.

AD: How does this motivate you going into nationals?

EC: Those two wins in the semis and in the finals, and especially doing so well in the finals, makes me feel much more confident in my ability in matches at nationals than if I had just gotten a regular decision or major [decision] or something like that. It’s a new level of confidence with where we are until we get there.

AD: Will your training change at all heading into the national meet?

EC: It will be a little bit. We’ll be tapering down and focusing on just finding points. It’ll be less making sure my body is ready and wearing myself down and more focusing on recovery and things like that.

AD: This is your second time going to nationals. How was your experience at the tournament last year going to help you going into this year?

EC: Obviously it’s a bit of a different arena, but it’s the same feel: a bunch of mats, a giant stadium. It’s not going to be a shock to be in that same situation having been there before. The only difference is just going to be how I perform compared to how I performed last year.

AD: How are you feeling about the team as a whole going into this with six athletes qualified?

EC: I feel like we’re all pretty confident coming out of this weekend. Especially sending six guys, that puts us in a really strong position to take home the first-place trophy. So I feel like the energy’s high. These guys are all ready to wrestle and perform. We’re all peaking at a good time, so we’re feeling pretty good.

AD: What is your goal for nationals as an individual?

EC: Definitely to win, but not only to win but to dominate on a completely different level because yes, I could go in, I could win back a few points in a match, but for me personally, that wouldn’t be enough. That wouldn’t satisfy me. I would want to go into matches and pin my way all the way through the finals. I want to show that it’s not a fluke and I can win every single year that I get there.

AD: What outcome should we expect from the team?

EC: Definitely a first–place finish. I feel pretty confident going into the weekend. We have a bunch of very strong guys who are all capable of making it to the finals, which scores us points. They are all familiar to the territory of being in big matches, so I feel like we handle pressure very well, and that will carry us a long way until the weekend.