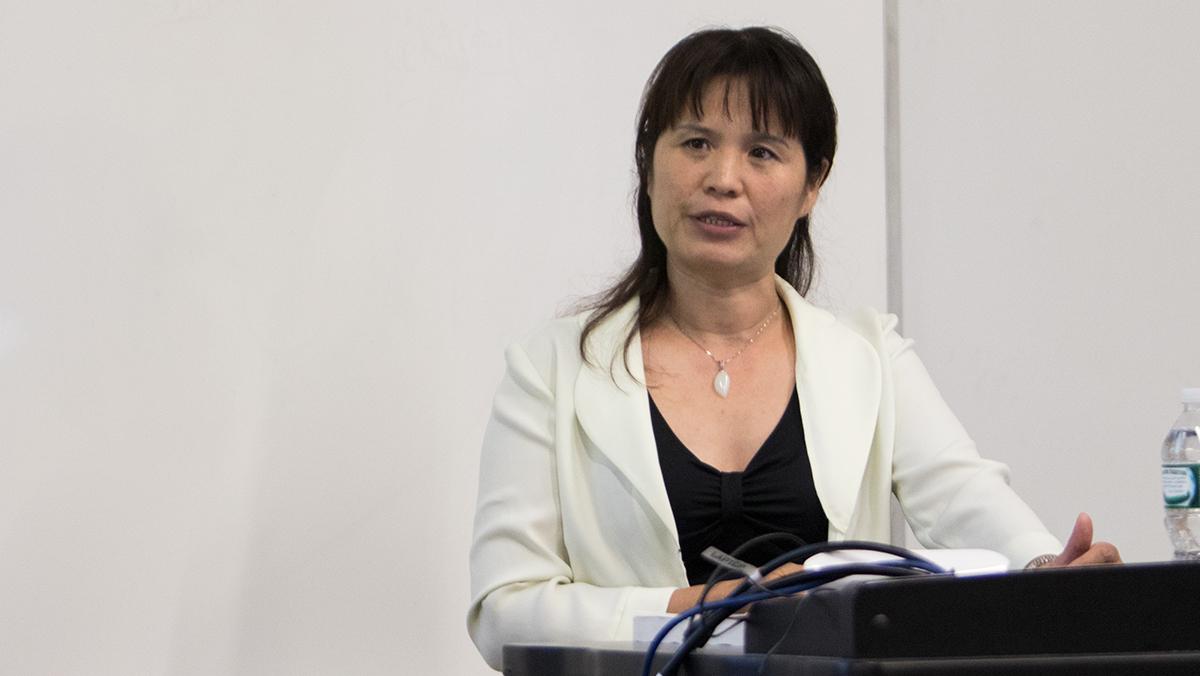 As part of the Health Promotion and Physical Education Speaker Series, Jinxia Dong —  director of the Peking University Research Centre for Gender, Sports and Society — visited Ithaca College on Aug. 29 to speak about the evolution of “Women and Sport in Modern China.” She received her bachelor’s and master’s degrees from Beijing Sports University and a Ph.D. from the University of Strathclyde in the United Kingdom.

Dong has been invited to universities and international conferences in Germany, Canada, the U.S., Greece and Denmark to lecture and present her research on sport, women and society in China. Her book, “Women, Sport and Society in Modern China: Holding Up More Than Half the Sky,” also explores the rise of female athletes and their relationship with politics, culture and society.

Senior Writer Vinica Weiss spoke with Dong about her research, women’s relationship with sports and politics in China and how this relationship differs from in the U.S.

Vinica Weiss: What influenced you to research women and sport in China?

Jinxia Dong: I was a gymnast myself and then later on was involved in a number of research and judging activities, so I had the chance to meet different female athletes and coaches, so I had a lot of hands–on experience. Then I went to Britain to study my Ph.D., so I chose the subject — women’s sports — as my Ph.D. topic. A few years later, 1995, [The Fourth World Conference on Women] was held [in Beijing], and that also helped me think about women’s sports in terms of gender relations.

VW: How have sport and politics in China been intertwined, specifically in regard to women’s sport?

VW: Is there not a wide gap between men’s and women’s sports in China?

JD: The Chinese system was mostly a state-sponsored system for sport, so this system hasn’t changed completely, but few sports have changed, like football, basketball partially, tennis. I think tennis — women did very well, and most successful female players earned more than men did. They had more opportunities going abroad to compete, so sometimes men complain about unequal treatment to them. In football, I think women don’t have the same opportunity to have sponsorships.

VW: How does Chinese women’s relationship with sport differ from, for example, the U.S.?

JD: After New China was created in 1949, the first law passed was about women. They called it the New Marriage Law. That is the first law of New China passed, which gave women equal access to marriage, to family life. The second law passed was about property inheritance, which gave women equal access to inherit properties. Also, very quickly, sports teams were established, both for women and men, equally. That is based on the principle that men and women should be equal. From the early 1950s, Chinese women already had good access to equal coaching, equal facilities and equal opportunities for many occupations. But American and British women didn’t have that equal access until the early 1970s.

VW: You spoke about the Olympic Games and their impact on China. What did hosting the 2008 Beijing Games mean for China, especially for women?

JD: To host the mecca event is a good chance for China to show the world their image, their achievement, so China really took that very seriously, and in hosting the games, women have played a very important role, not just for athletic participation, but a lot of women were involved in value management, hotel, transport, financial management, nearly every sect. A lot of women were involved, including many volunteers.

VW: Where do you see women’s relationship and role within sport going in the future?

JD: Chinese women will continue to play an important part in ensuring Chinese success in international competitions. But men will also do much better than they did before, so the differentiation between men and women will be closer. Women will certainly be a major part continually.