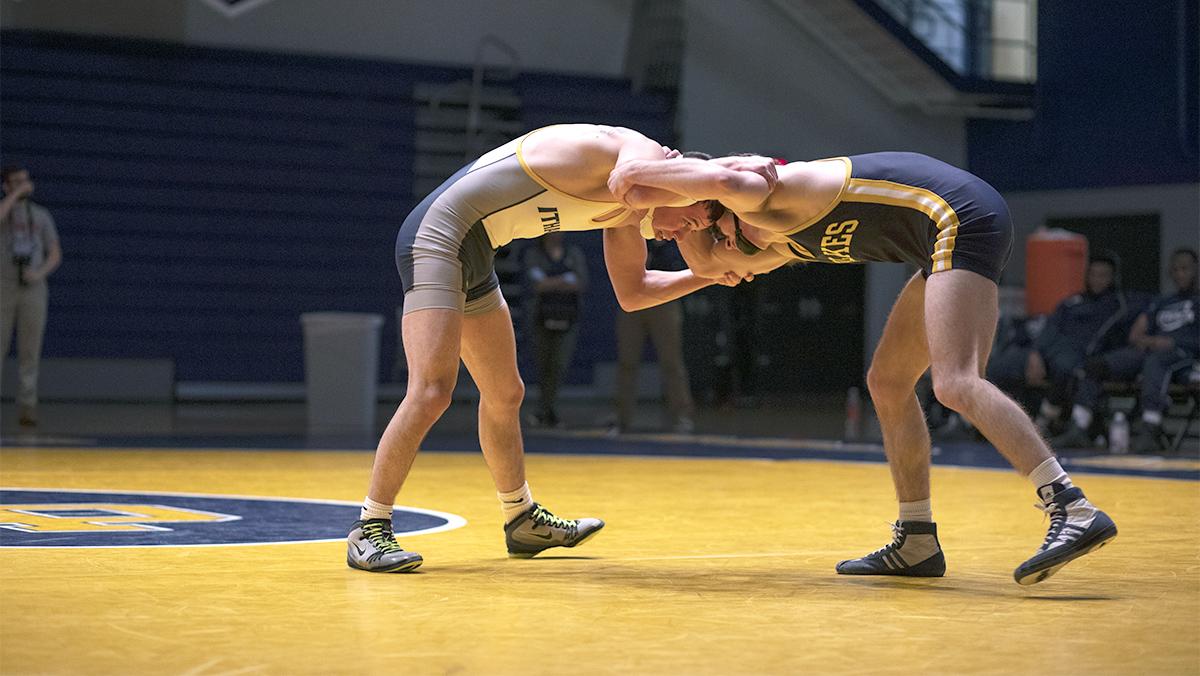 The Ithaca College wrestling team will start its 2021–22 season Nov. 5 with the Ithaca Invitational, but the stands in the Ithaca College Athletics and Events (A&E) Center will be empty. While wrestlers would like their friends and families to watch their return, the team is focused on starting its season strong.

Prior to the Ithaca Invitational on Nov. 5 and 6, Ithaca College Athletics announced Oct. 27 there will be no spectators permitted for the event held at the A&E Center. The wrestling team did not compete in 2020–21 because its season was canceled due to the COVID-19 pandemic. The Ithaca Invitational is the team’s first competition since the NCAA Mideast Regionals on March 1. Susan Bassett, associate vice president and director of Intercollegiate Athletics and Recreational Sports, said the decision was made due to the size of the tournament and the number of student-athletes who will be attending the invitational.

“The invitational is traditionally the opening competition of the year for the programs that attend,” Bassett said. “There will be close to 300 athletes in the facility. So between the need to set up for seven competition mats that are going through the day on Friday and six on Saturday, that takes up a lot of space in the facility.”

“We were in constant consultation with Marty, and he was reaching out to colleagues to talk about how we could manage the event,” Bassett said. “His priority was to allow a full complement of athletes to compete, so we decided it was in the best interest of the safety of the participants and coaches to eliminate spectators from the event.”

Nichols said his team is focused on preparing for the action on the mats and is not worried about the empty seats at the A&E Center.

“They are going to be excited,” Nichols said. “We have not competed in a while, and that intensity level from someone from a different school is difficult to replicate anywhere else.”

While there are no spectators allowed, Nichols said the wrestlers involved in the invitational are not required to wear masks while competing by NCAA policy.

Senior wrestler Matt Griffin said having no fans or spectators at the event is going to be an unusual atmosphere compared to past events. Griffin added that he and his teammates will need to drive the energy of the event.

Griffin said the lack of fans at the Ithaca Invitational will help ease the team into competition and help it get prepared for the rest of the season.

“It has been a year and a half since I have wrestled, so having no fans will really help us as a team get back into the swing of things competitively,” Griffin said. “It is better to me than not wrestling for a long period of time and then boom, my family, my friends and my girlfriend are all there watching me.”

Nichols said since the competition on the mats is going to be the same as it was in the past, he does not expect the environment to be any different either.

“They are not going to be focused on the lack of people in the gym at all,” Nichols said. “They are focusing on their own matches, and they have plenty of teammates there to cheer them on as well. It is really just business as usual.”

“We will revisit each situation and event as they arise,” Bassett said. “Our hope and plan at this point is to be able to permit spectators at all future wrestling events.”

Griffin said the team is hopeful to have spectators at future events to help give them the momentum to potentially push towards a national championship.

“All athletes we love to perform and put on a show, especially wrestling,” Griffin said. “It would motivate us tremendously to have our friends and families there to support us, so maybe it is a good thing we do not have spectators for the first tournament so we do not take it for granted, so that when we do have our friends and family there, it is that much better.”