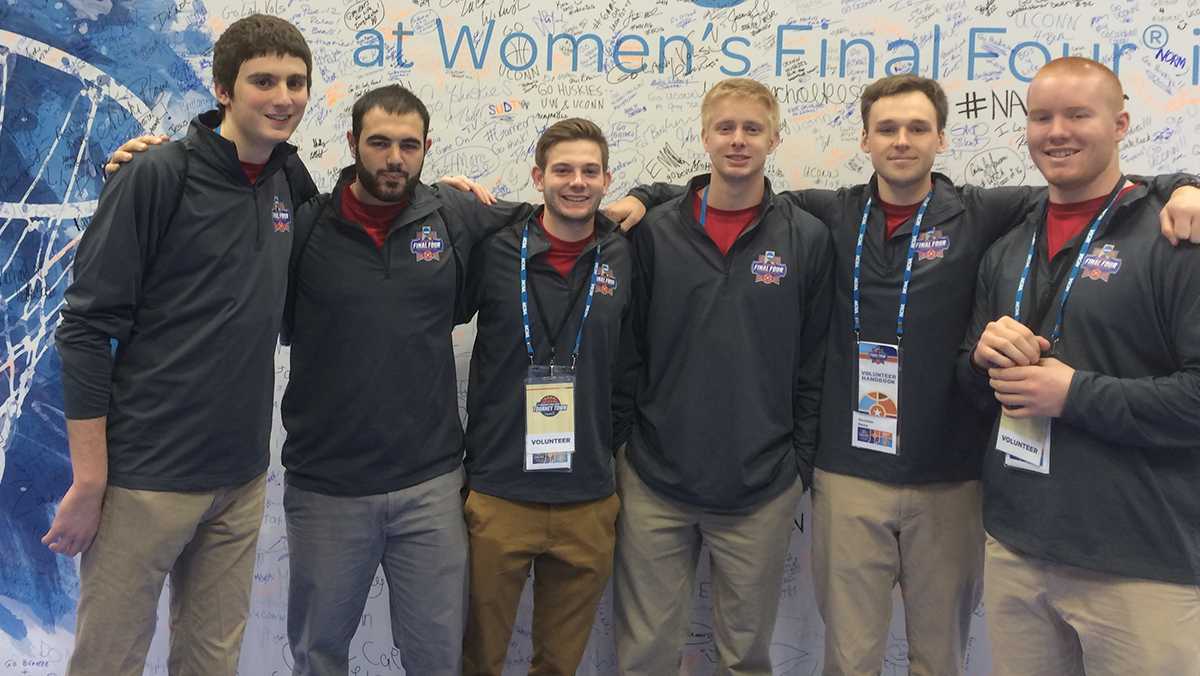 COURTESY OF ROB TERANO
Eight students, six whom are shown above, had the opportunity to volunteer at the Tourney Town in Indianapolis, Indiana, in between watching the basketball games.
By Jonathan Beck — Staff Writer
Published: April 13, 2016

Eight Ithaca College students got the chance of the lifetime to work at one of the biggest sporting events of the year: The NCAA Women’s Final Four.

The trip was sponsored by the Sport Event & Networking Club and the group was responsible for the event-planning side of the Fan Fest, giving them their first big break after all the smaller events they held for the club.

The trip, the first of its kind, was set up in November 2015. The total cost of the trip was about $7,500 and was funded by the Department of Sport Management and Media, the Student Government Association and the club raising its own funds.

Madsen, who coached women’s college basketball for almost 12 years, said it took many calls and chasing people around to find the right person to connect with.

“It just snowballs,” Madsen said. “College athletics is a really small world. People move around a lot, and having been on a committee, you get to know a variety of people, so I know some people in the NCAA.”

On April 2, they arrived and met with representatives of the NCAA before starting their shifts. They were matched with other volunteers and split into teams.

The following day, they worked the VIP viewing party for the men’s Final Four. There they saw many members of the four basketball schools as well as the president of the Women’s Hall of Fame. 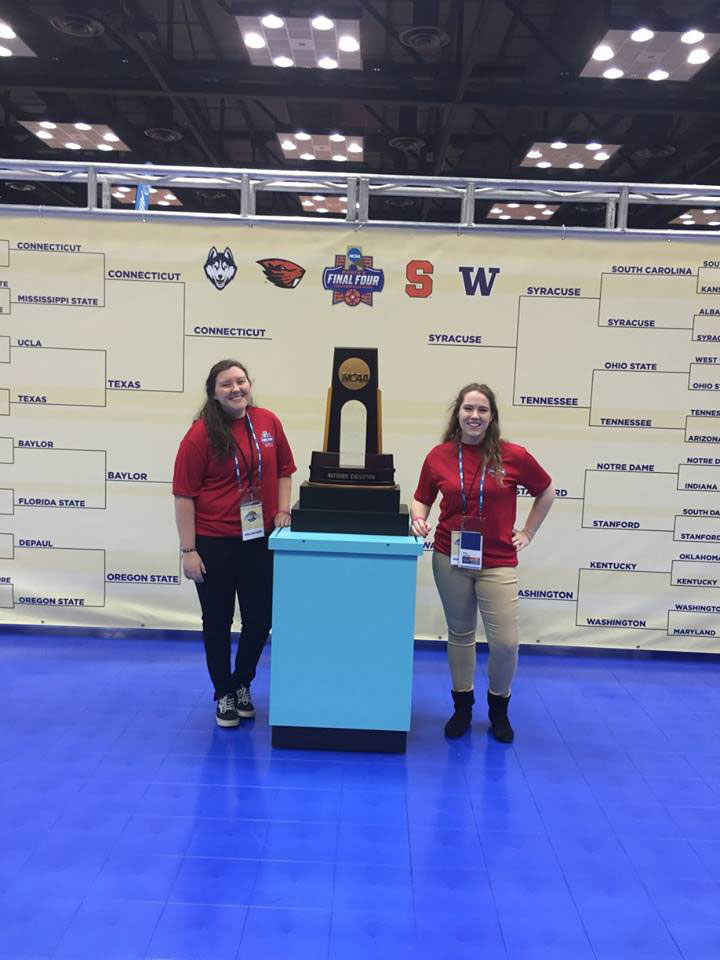 The three-day festival included giveaways, interactive games, basketball contests, autograph signings and other activities. The students worked the majority of their time there, assisting as volunteers for most of the events. The fan fest, called Tourney Town, was held at the Indiana Convention Center in downtown Indianapolis and was free and open to the public.

Bankers Life Fieldhouse, which played host to the Final Four games, featured the Division II and III women’s basketball national championships for the first time as well. It marked the third time Indianapolis hosted the event.

The students were able to attend the games, and Tessier said the Division III matchup between Thomas Moore College and Tufts University was the best game of the entire weekend.

On April 5, the day of the women’s Final Four game, Tessier said, he and his classmates had the opportunity to raise money for Breast Cancer by selling pink bracelets at $2 apiece to fans who would walk by or attended the festival. The bracelets were in support of the Kay Yow Cancer Fund, founded in 2007, which was established around former North Carolina State University women’s basketball head coach Kay Yow, who suffered from breast cancer. Yow coached for 38 years, amassing 700 career wins before dying in 2009.

“For the weekend, us as a group, raised over $1,000 for the Kay Yow Foundation and then the Foundation, for the weekend, raised close to $3,000,” Tessier said. “It was cool to go there, and working the block party, it’s fun, but to actually do something different to raise money for a good cause, it seemed more rewarding.”

Later that day, the students got to watch the University of Connecticut defeat Syracuse University to pick up their fourth straight national championship.

Callahan said they took what they learned from the club over the years, as well as the classroom, to apply it to the event.

“We got to put on an event; we got to help run an event, which was awesome. Our smaller events definitely helped us lead up to that. But also the networking aspect. We were able to make those connections, and now they know Ithaca College,” she said. “They know that we are hard workers and that we got stuff done for them.

Madsen said the most challenging part of the trip is the students have to be willing and interested in doing other events, despite being there for the Final Four.

“I don’t think you think of all the events that go on surrounding a Final Four,” she said. “You kind of just think about the basketball part. Our connection at the NCAA, [Jerrell Price] he’s on the women’s basketball championship staff, but really, he’s part of the selection process. … After that, he’s doing all these other events that aren’t necessarily sporting events.”

Henry said it was different to separate himself from a fan and working the games.

“It’s definitely not what you expect,” Henry said. “At least for me, it’s what they’re there for. I enjoy it. You’re putting something on for other people to enjoy, and that makes a difference.”

Callahan said her favorite part of the trip was being able to witness how much the fans enjoyed the festival after all the hard work they put in.

“Seeing the fan experience — stepping back and not being a fan and see how excited they were and happy while these events were going on — was rewarding,” Callahan said. “To be able to say, ‘Wow, we helped put this on. Look how many people showed up, and look how many people were pleased.’ Thirty degrees and 60–mile an hour wind, people were still excited to be there.”

What’s next for the club is a hopeful trip to Super Bowl 2017 next February in Houston.

Henry said they are starting to raise funds early and would jump at the chance to go.

“Both events are great, but the Super Bowl would be a step up,” he said. “I think it would only bring better things for us and the club.”