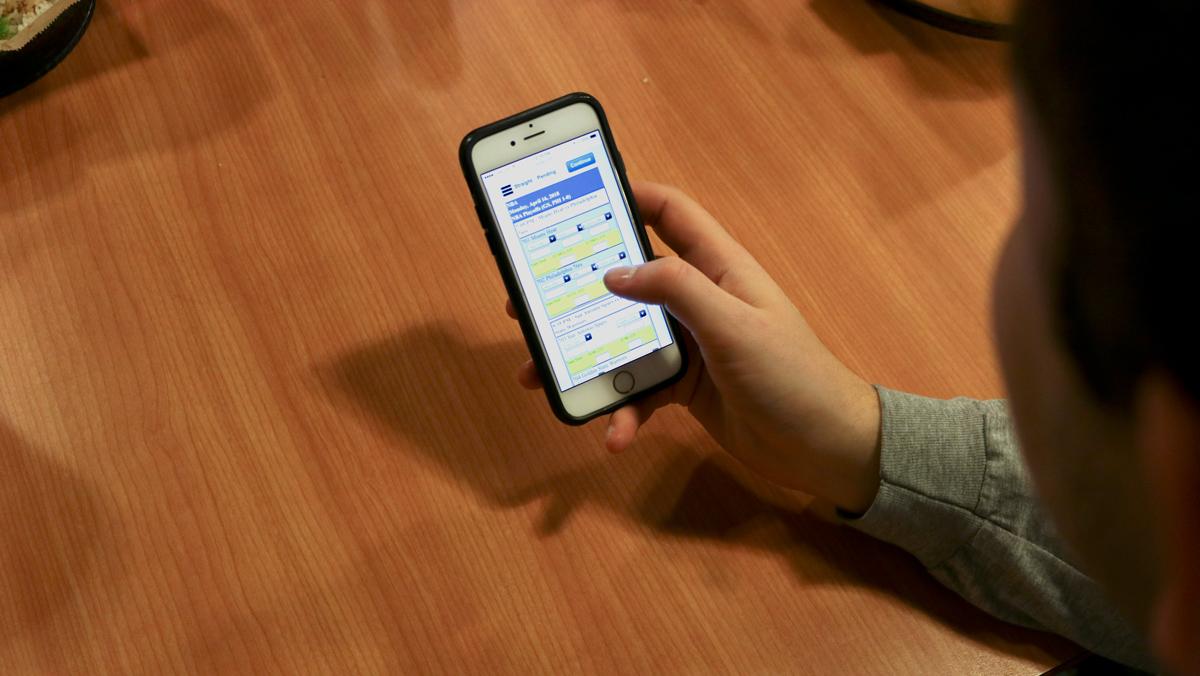 CAROLINE BROPHY/THE ITHACAN
Charlie* looks at odds on the betting website he uses on his cell phone. Charlie was introduced to the website by Mark*, who served as Charlie’s bookie for the site.
By Matt Hornick — Sports Editor
Published: April 18, 2018

When the Atlanta Falcons and the New England Patriots reached the halfway point of Super Bowl LI on Feb. 5, 2017, the Falcons were in possession of a 21–3 lead over New England.

Mark*, an Ithaca College student, was feeling confident. His homegrown sports book, which he started with a friend, had received an overwhelming number of bets on the Patriots, who were three-point favorites to win the NFL Championship. For Mark’s clients to win their bets, the Patriots had to win by more than three points, so while the Falcons were sporting an 18-point lead, Mark was up by 21 points. An Atlanta win would allow him and his partner to hold on to approximately $3,500 in bets.

Before becoming a bookie himself, Mark and his friends had a bookie who they would bet on sporting events with through a website, and one day, they realized one of their favorite hobbies could become their new source of income. A bookie takes bets and manages payouts for a sports book, an organization that creates betting odds. Mark estimates that he and his partner made between $8,000 and $10,000 during their first 10 months as bookies.

“We were like, ‘This guy is just robbing us blind and making all of this money off of nothing,” Mark said. “How can we do this?’’’

Mark and his friend decided they would start their own sports book. Clients would send them betting odds from sports-betting websites, along with the desired amount of money they wanted to gamble through Venmo, an app that lets people send money to one another electronically. If the client won a bet, one of the bookies would send the winnings back through Venmo. If the client lost, Mark and his partner would keep the money. A traditional sports book, such as the legal ones in Las Vegas, makes its own odds, which are specifically calculated to create the most even betting line possible.

“It got to the point where we were moving more money than Venmo would allow us to,” Mark said. “Venmo only allows you to send like $3,000 a week, and we were sending $3,000 every couple of days.”

With eight minutes and 31 seconds left in the third quarter, the Falcons scored the first points of the second half, extending their lead to 28–3. This is the last time Atlanta would score in this game; as the Patriots would score 31 unanswered points to win the game in overtime 34–28.

“Just from that one game, we lost $3,500,” Mark said. “Once we lost that, we could not physically pay out all of the people. We had to tell people that they were going to have to wait a few weeks for their payout.”

The $3,500 Mark had to pay his clients is just 0.00000074 percent of the $4.7 billion the American Gaming Association estimates was bet on Super Bowl LI. The AMA estimates that 97 percent of all bets made on the game were made illegally, as many people from across the United States have gained an interest in betting on sports despite being from states where it is illegal.

Nevada, Delaware, Montana and Oregon are the only states that have legalized sports betting, so residents of the remaining 46 states must turn to other methods to suffice their gambling desires. The ways to gamble illegally include underground local bookies, similar to Mark’s operation, or apps and websites that are run internationally, such as Bovada, Betway, bet365 and the website Mark bets through, which is not named due to its illegality, in countries where sports betting is legal.

Research from the University of Nevada–Las Vegas shows the revenue of Nevada sports books increased from $136.38 million in 2009 to $231.79 million in 2015. While there is no way to track data behind illegal sports betting in the U.S., illegal betting is likely growing in a similar manner, experts believe.

“Everyone has access to the internet now, and that gives people access to betting in other countries,” Minton said. “As betting continues to grow, it gets more coverage from the media, so while it may not be legal, it’s still being talked about.”

The AGA estimates that $150 billion is illegally bet on sports annually, while some estimates reach as high as $400 billion.

Charlie*, an Ithaca College senior and client of Mark’s, said he enjoys betting because it adds another element to games he was already interested in and can create interest in games he would not care about.

“If you like watching football but there are no games on with teams you like, you can throw a few bucks on a game just to give yourself a reason,” Charlie said. “I’m always wary of the risk I’m taking, but I’ve definitely made more money than I’ve lost, and the site doesn’t allow you to bet more than $25 at once, so I don’t think I can lose too
much money.”

The future of sports betting is currently up in the air as a pending Supreme Court verdict could alter the laws in a number of ways. The case, Murphy vs. NCAA, is taking a look at New Jersey’s in-state prohibition on sports gambling, along with the Professional and Amateur Sports Protection Act of 1992, which prohibits sports betting in all but the four states where it is legal. If PASPA is determined to be constitutional, nothing changes. If it is deemed unconstitutional, states will be able to regulate legal sports betting at their own discretion.

Matt Netti ’18, host of “The Weekend Winners,” a podcast about sports betting, said the only risks he worries about when betting are financial, not legal.

“My biggest worry is losing too much money,” Netti said. “I know what I’m doing is illegal, but those punishments don’t really worry me.”

“Younger people are less averse to risks than older people,” Minton said. “Betting is also something that happens socially, so if someone you know is betting, it might influence you.”

Netti said he thinks the rise in the popularity of betting stems from how accessible sports are in the digital age.

Mark has continued to work for a betting website but is no longer a full-time bookie after his Venmo account was shut down.He said betting on sports gives meaning to otherwise meaningless sporting events.

“The appeal of betting is that it turns sports games that you would not normally watch into games that you care about more than your life,” Mark said. “You could throw a $10 bet on a Bills-Browns game, two bad teams you have no interest in, and it turns that game into the Super Bowl. My friends and I put $10 on every underdog in the first round of the NCAA Tournament, and it made every game so much fun to watch.”

*Names in this story have been changed to protect anonymity, as sports betting is illegal.