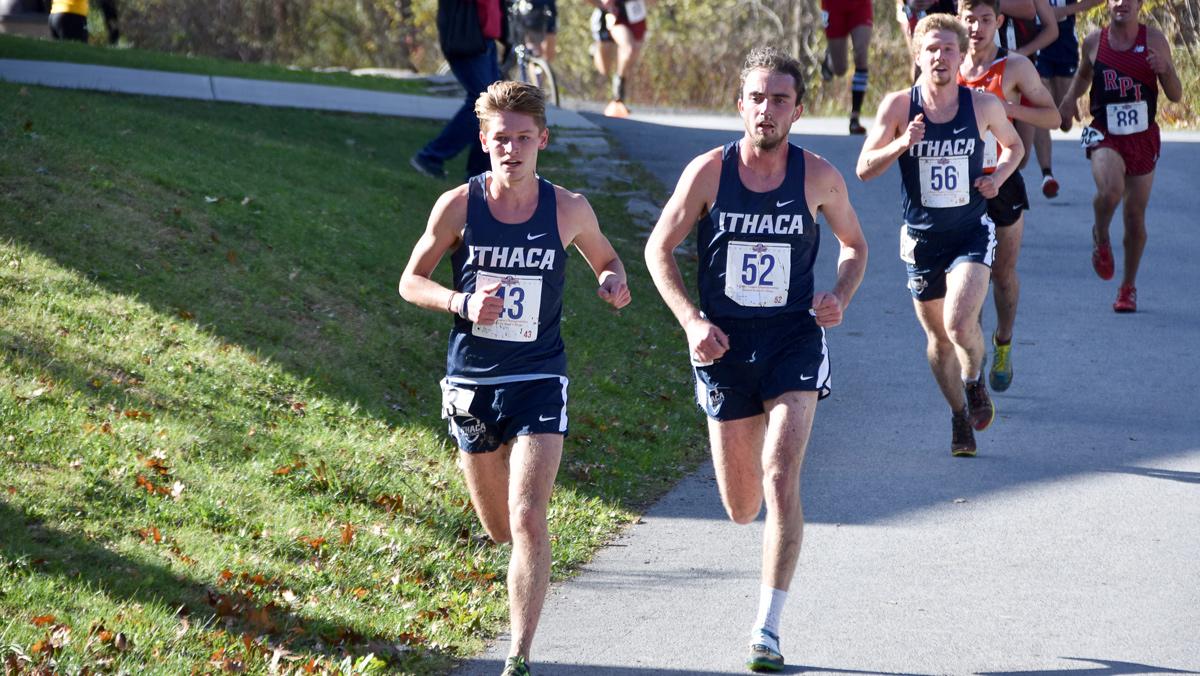 The Ithaca College men’s cross–country team is thriving because of its experienced veterans this season. The team returned eight seniors, the second most among fall sports, only behind the football team, and it has been performing at an extremely high level this 2019 season.

The men’s team is ranked No. 27 in the nation and took home a third–place finish at the Liberty League championship Nov. 2. If the squad continues to perform at this caliber, it has a chance to make an appearance at the NCAA national championship for the first time since 2003.

Headlined this season by their large class of seniors, including Forest Stewart and John Blake, the Bombers have seen significant improvement in their races, including four top-3 finishes among their six completed meets. Since Stewart arrived at the college, he said, he has seen the program grow exponentially from year to year.

“The program has gotten a lot better,” said Stewart. “Every single year it’s progressed in a positive way. It feels amazing to be involved in a program that has gotten better and that I’ve impacted it. It’s been a really special thing for me.”

This season, Stewart said, the team felt the need to improve the culture in preseason training. He said the team adopted the phrase “rethink fast,” which means three things: train hard, don’t worry about other teams and get the job done. Stewart said that this improvement in team culture was led by the senior class and that the eight runners share a common motivation for succeeding in their final year on the team.

Because they’ve been running together for so long, the seniors have developed special connections with one another. That connection drives them to succeed for them, Blake said.

Blake said the bond that the seniors have built over their years together has allowed them to thrive as runners, both individually and as a class.

“We’ve been competing together for four years now,” Blake said. “These guys are my best friends. Running together every day and doing workouts together has been the greatest experience of my life.”

Blake said the success of the team this year has not come as a surprise to him. After seeing how his class fared in its first year of competition and observing the incoming freshman class, Blake saw this success coming from a mile away.

“I knew that over the next couple of years we were going to develop those runners, and by this time we were going to be very good and competitive,” said Blake. “It’s exciting to see all of this come to fruition.”

Head coach Jim Nichols said he believes their bond will last for years after graduation. He said he believes that they are all great leaders and do great jobs setting academic examples and carrying out the traditions of the program.

“[Their bond] is a great one,” Nichols said. “It’s one that will last. The season’s not over yet, so they have a couple weeks to prove where they stand in the history of the program, but they are definitely one of my stronger teams.”

With the 2019 season nearing its conclusion, the team will soon need a new set of leaders to step up and fill the holes left by the eight graduating seniors. Stewart said he is confident that the roles will be filled by not just one or two runners but rather a leadership by committee approach.

However, the first name that came to both Stewart and Blake’s minds was junior Chris Singer.

“He’s more experienced than anyone else in terms of running at nationals, so he knows what it takes to get there and to succeed there,” said Blake. “He’s got another year, and he’s definitely our best runner, so he’ll be a good leader.”

Singer is fresh off of winning the individual title at the Liberty League championship Nov. 2 and is fifth on the college’s all-time 8K record list after his finish at the Connecticut College Invitational.

Singer said that he feels extremely fortunate to have been able to learn and grow under the leadership of the senior class and that group has set the standard for the entire team.

“I definitely think they did a really good job of creating a culture,” Singer said. “You’ll obviously have your individual goals, but then you have your team goals, and I think they’ve done a good job at pushing for both of those things.”

After the team’s Liberty League third-place finish, it is headed next to the upcoming NCAA regional meet Nov. 16 in Canton, New York. A top finish would mean a bid to the NCAA championship. Making it to the national championship would break a 17-year drought of failing to make the final competition and ultimately cement a legacy for this team.

“We’ve got a really talented group of guys here, so I think the legacy that I want is that when Nichols is retiring, he’ll think back to us as one of the strongest teams he’s ever coached,” Blake said. “When we think back on it, we’ll think of how competitive we were, how great it was to run on this team, and how much fun we had.”