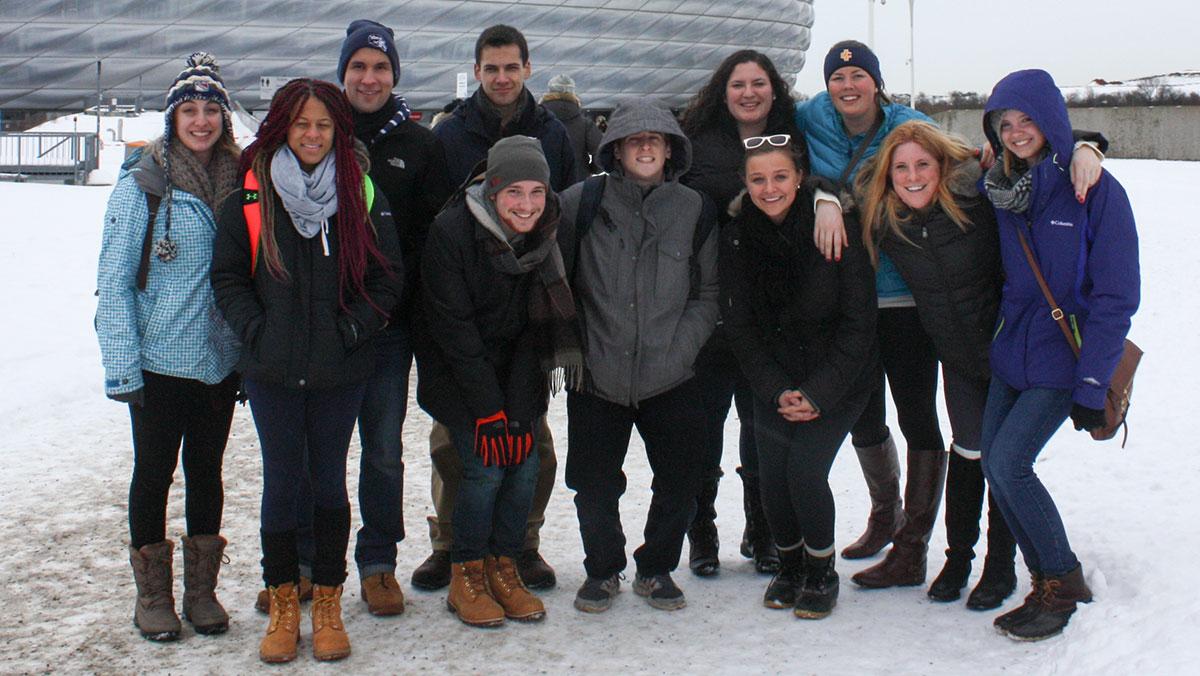 Karly Redpath/The Ithacan
On the first day of the 14-day trip, the students visited Allianz Arena, which is home to FC Bayern, one of Germany’s premier soccer teams, in Munich, Germany.
By Miles Surrey — Senior Writer
Published: January 28, 2015

Altenberg, Germany, is not a typical venue for a professional sporting event. The small town in eastern Germany is dependent on the sole traffic light in its center. From there, the grocery store, gas station, bar, two restaurants and a bed and breakfast for visitors are all within walking distance. Situated just north of the country’s border with the Czech Republic, it lies engulfed in a maze of forest.

However, within the adjacent woodland is a bobsled, luge and skeleton track, the inception of which was contingent on the sporting rivalry that once existed between East and West Germany. With Germany unifying in 1990, the once-secret course was adopted by all German athletes and shortly after became a regular on the Bobsleigh World Cup circuit.

As members of the United States bobsled team prepared for their first run through what has been called the most challenging and technical course on the European side of the World Cup Tour, they heard the unfamiliar sound of applause coming from the viewing area. The cheering was coming from 14 Ithaca College students, who were spending two weeks experiencing European sporting culture in Germany and Austria.

Led by Heather Dichter and Kyle Woody, assistant professor and instructor in the Department of Sport Management and Media, respectively, the one-credit, two-week study abroad course, called the European Sport Experience, spanned several large cities and small towns within Germany and Austria. The trip allowed students to interact with athletes and members of national sport federations, in addition to immersing themselves in the local culture. Students spent several days in Munich, Germany, then traveled to Salzburg, Austria, before crossing the border back into Germany to round out the trip in Altenberg and Dresden.

With the course in its inaugural year, Dichter said the initial planning for the trip dated back to her interview process with the college in 2012, and from there she promoted it for over a year.

“It’s not covered by financial aid, and so it was good to be able to publicize it for almost a year and a half,” she said. “Obviously, there’s a long process because it has to be approved by the Office of International Programs … there’s a lot of planning that goes into and really planning out about 15 months before a trip happens.”

Beginning Jan. 2, the course also provided students with an opportunity to travel abroad without missing a semester at the college. Junior Kyle James said he was happy the trip allowed him to get out of the country without disrupting his busy school schedule. Additionally, he said the journey was distinct in its ability to provide each student with his or her own personalized experience.

Hoping to pursue a career in sports marketing, senior Kristina Stockburger was able to see how winter sports such as bobsled, skeleton and ski jumping, which are relative unknowns in the United States, could create a passionate fan atmosphere she compared to that of a Division I college football game. The locals, she said, heavily invested themselves in the sports.

“It was interesting to see a sport that in America is rarely heard of, or people don’t even know exists until the Olympics, is one of their most prized possessions and they love seeing it,” she said. “Any sport can really bring passion, and people just love supporting their own country.”

While the majority of the students on the trip like James and Stockburger were immersing themselves in the culture and learning about new sports for the first time, junior Max Rottenecker made the unconventional decision to embark on a study abroad trip in his home country.

The Bochum, Germany, native said he signed up for the course to attend sporting events he had never seen live, including one event of the annual Four Hills Tournament for ski jumping in Bischofshofen, Austria. Rottenecker said he was also able to expand his professional network through talking with several sport organizations, most notably the German Football Association.

However, Rottenecker said he was most impressed with athletes from these winter sports making the most of their surrounding area to keep in shape for competitions. While walking past the hotel hosting the Latvian bobsled team, he saw members of the team bench pressing in the hotel parking lot. Being an athlete on South Hill as a member of the football team, he said their determination amazed him above all else.

“Outside it was like 25, 30 degrees, and they’re out there and they’re doing their workouts and they’re Olympic athletes, while we [in America] have all these great facilities,” he said. “That was inspiring to see how those athletes, under what conditions they work, and how they travel and how far away they are from home, they still are able to give you peak performance. I was very impressed, as an athlete, by that.”

Dichter said she views these competitions as a stark contrast to a typical sporting event in America. Particularly with the four major professional sports: American football, baseball, basketball and ice hockey, the sports are contained within a mostly circular venue. With the winter sports in Europe, the tracks are an extension of the surrounding natural environment.

“These types of outdoor sports, yes there’s an entrance to them, but you are in nature,” Dichter said. “There’s so many different places to go, where you want to stand at the venue and seeing different aspects … you get an entire venue of people who are very excited to be there.”

And while the local fan base in Altenberg passionately supports the German bobsled, ski jump and skeleton teams, the United States bobsled team rarely draws a crowd interested in rooting for them, specifically. Stockburger said because of that, the team was more inclined to talk with the members of the trip in both formal and informal settings. The students were able to not only speak with the athletes at the track but also were invited to the team’s small hotel to continue the dialogue.

“They were very open talking with us about their training regimens, diet, what they do, when they do it, what their entire schedule is like, things like that,” she said. “I think they just want more people to learn about their sport.”

James said for him, interacting with the U.S. bobsled team was one of the biggest highlights of the trip.

As for bringing future students on the trip in coming years, Dichter said she hopes they will share a similar appreciation for the sporting culture in Europe and be able to transfer what they learned over to American sports.

“Getting an opportunity to see what else is out there and how other sporting events run, what gets other fans excited, can be something that they could do,” she said. “What would then be new here in the U.S., drawing on these other ideas. I think [the course] made some new fans of these sports.”