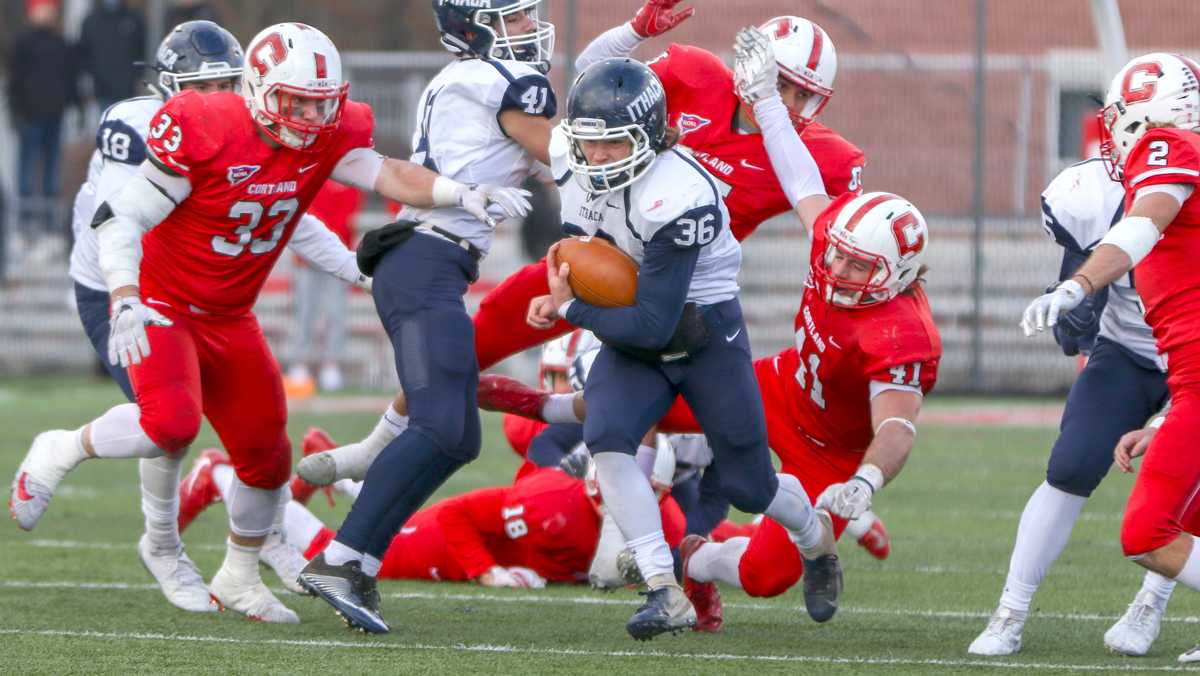 Next year, for the first time in the rivalry’s 61-year history, the annual Cortaca Jug game will be played at a neutral site, and fans have conflicting opinions on the news.

Susan Bassett, associate vice president and director of intercollegiate athletics and recreational sports at Ithaca College, and Mike Urtz, director of athletics for SUNY Cortland, announced Nov. 7 that the 2019 Cortaca Jug will be played at MetLife Stadium in East Rutherford, New Jersey. MetLife Stadium is home to the NFL’s New York Giants and New York Jets. The game is scheduled for 1 p.m. Nov. 16, 2019.

Bassett said moving a Cortaca game to MetLife Stadium has been talked about for years but was never put into action until this June. She said there are four alums who serve on the New York City chapter of the National Football Foundation who helped plan the event — Jim Bradley ’92 Bob Garone ’87, Marc Hudak ’90 and Ethan Medley ’01.

After it became clearer that MetLife Stadium was a possibility, Bassett had a preliminary conversation with the Senior Leadership Team on campus, as well as with Cortland’s athletics department that continued throughout the summer. Finally, on Nov. 5, the contract was executed for the game to change locations.

“We felt like the vision for what it could mean for Ithaca College’s visibility was really exciting,” Bassett said. “Metro New York is home to so many of our alumni and current students that it was a real opportunity to bring tremendous visibility to Ithaca College.”

Bassett said one of the reasons for moving the game is to provide a real-life learning experience for students at the college. Students in the Roy H. Park School of Communications will have the opportunity to broadcast from the game, as well as produce any print media or radio. She said students from the School of Business who study sport management will help plan the event and students studying athletic training will also play a crucial role in the production of the game by helping athletes in the stadium.

Bassett said the athletics department is working to get the game televised on ESPN.

Bassett said there has to be a minimum of approximately 20,000 tickets sold for the game at MetLife Stadium to be a success. At the 2018 Cortaca Jug, 10,000 fans attended the game in Cortland. In 2017, when the Cortaca Jug game was held at Butterfield Stadium, 11,000 people were in attendance. In the past, tickets for the event have gone on sale about two weeks before the game. Because the 2019 Cortaca tickets go up Dec. 1, Bassett said the college will have plenty of time to promote and make sure that the event is feasible.

She said the athletics department is determined to make the event work and that tuition dollars will not be used to fund the event.

“We developed a very, very, thorough, careful business plan to make the game both affordable for anyone who wants to attend and make it meet the financial commitment that we have agreed to,” Bassett said. “I want to make sure everyone knows we are not using tuition dollars for this. Failure is not an option, and we will not fail at this.”

Junior Ben Carlton, who does radio broadcasts for the football games on WICB, said student media benefits from the game being moved to MetLife Stadium.

“It allows them to work in a larger, more professional environment, which I think is valuable experience for the real world,” Carlton said. “Secondly, the game will take place in a much larger media market, which will lead to lots of exposure for the student media.”

Bassett said transportation to and from the game will be provided for all students. The game alternates between being played at Butterfield Stadium and Stadium Complex at Cortland. The drive to Cortland is approximately 40 minutes from Ithaca College. The drive to MetLife Stadium, which is in East Rutherford, New Jersey, is approximately 3 hours and 45 minutes away.

Claudia Ayers, assistant vice president of engagement and constituent relations, said there are currently 5,381 alumni that live in the five boroughs of New York City. Within a four-hour radius of the city, there are 27,221 alumni.

Casey Musarra ’11, said she likes the idea and plans to attend the game. She said she thinks the game being played at MetLife Stadium brings more visibility to the college.

“The Cortaca Jug is the biggest little game in football, that’s the catchphrase, but if this game ends up being televised on ESPN, that gets Ithaca’s name out there across the country,” Musarra said. “A kid from California who is looking to major in physical therapy who has never heard of Ithaca, maybe this catches their eye.”

Cortaca is also widely known to be an all-day-long party for students, and some are worried that the traditional party culture that follows the sporting event will be lost at MetLife Stadium. Sophomore Danielle Roach said the location eliminates the potential for a party scene at the game and that students will miss out.

“It is a tradition here that when Cortaca happens, whether we win or lose, we go have fun at night, but we won’t really have that option next year,” Roach said. “It’s kind of like breaking the tradition.”

Besides MetLife Stadium, there are other large arenas that are closer to the college. The Carrier Dome in Syracuse, New York, has 49,250 seats and is one hour and 10 minutes away from Ithaca. New Era Field in Buffalo, New York, is home to the NFL’s Buffalo Bills, holds 73,000 people and is approximately three hours away.

Bassett said she wanted fans to be engaged in New York City.

Sophomore Nicole Brokaw said she likes the sense of community that the game brings to the school and is worried that will be taken away with the move to MetLife Stadium.

“It doesn’t make sense to me,” Brokaw said. “Why move the college’s most important sporting event away from the community? This plan is taking the money that the game brings to Ithaca away from the local community and is making the game a thousand times more difficult for individual students to enjoy. The importance of Cortaca is the community spirit.”

Catherine Felicetti ’17 said she is concerned about the distance between the colleges and MetLife Stadium.

“I worry that making the game so far away is turning it into an alumni only event that is inaccessible to current students from either school,” Felicetti said. “The Cortaca tradition was one of my favorites from Ithaca College and I would hate for future students to not be able to take place.”

Junior Jackson Roberts believes the location will bring the game more widespread attention from around the country.

“It’s a great way to grow the game,” Roberts said. “I think it will bring it back home in a way to all of the alums who live in the city and New Jersey and Connecticut. It will be great for the players as well. They get to see what it’s like to play on an NFL field, and it brings a whole new dynamic to this game that is already so big up here.”

Even though the 2019 game will be played at MetLife Stadium, Bassett said the game is not guaranteed to be at a neutral site in the years after.

“We don’t see us doing this every year in metro New York,” Bassett said. “I’m not going to say that we would decline future invitations, but it’s certainly not our intention to have Cortaca played at a neutral site every year.”