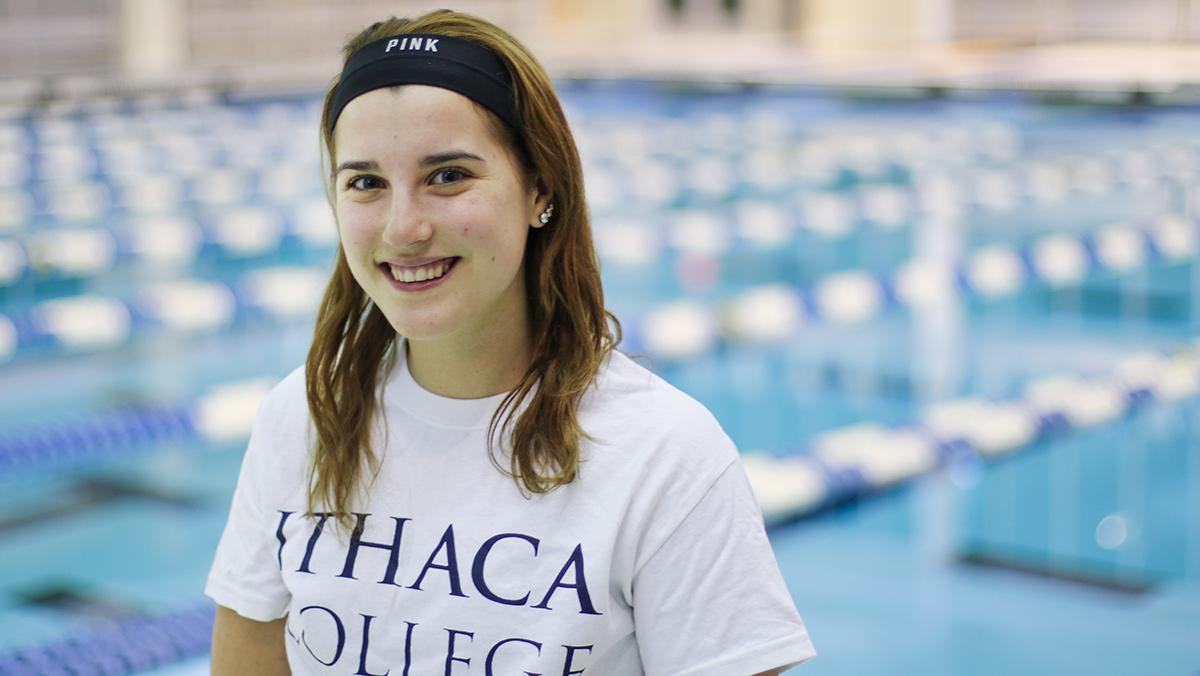 DANIELLE ALLENTUCK/THE ITHACAN
Sophomore Abby Uczen is a pool manager for the swimming and diving meets. Her responsibilites include setting up the pool and cleaning up.
By Casey Koenig — Staff Writer
Published: February 14, 2017

As the stands at the Athletics and Events Center Aquatic Pavilion began to empty after the Ithaca Invitational on Feb. 11, sophomore Abby Uczen’s work had just begun. Standing on a chair, she began removing the backstroke flags, taking care not to get them tangled. Uczen, along with about 10 other student workers, were transforming the pool from competition to recreation mode.

There are about 150–200 students who work as event staffers, whose jobs include setting up for a sporting event, taking it down afterward and providing assistance where it is needed throughout the event.

Fifth-year physical therapy student Zach Cole said he works about two to three events per week, and his hours range from six to 20 a week. He began working for the Office of Intercollegiate Athletics during the spring of his sophomore year after learning that there were jobs setting up athletic events. Student workers earn $9.70 an hour.

Cole, who played baseball for the Bombers as an undergrad, said he was working in the dining hall at the time and was willing to take any other job that came up.

“I really wanted something else because I knew my parents were going to have me do something,” Cole said. “I talked to the assistant A[thletic] D[irector] at the time, and he got me the job.”

Sixth-year physical therapy student Fran Busa, who works with Cole in the equipment room in addition to staffing events, played softball for the college for four years. Busa said she found out about the job while she was at freshman orientation and began working her freshman year. She said that similarly to playing softball, the event staffers work as a team.

“I like setting things up — it’s fun,” Busa said. “I like to move around. They tell us what to do, and we do it, but there’s some of us that are more experienced because we’ve been doing it longer, so they let us run with it.”

Uczen was offered a job as pool manager for swim and dive meets at the beginning of the fall semester. She was a member of the swimming and diving team last year but was injured before she was able to compete. Uczen said this job, which she has been shadowing and will officially take over next year when current pool manager Courtney Christ graduates, has allowed her to stay close to the pool and the team, as well as to see a different side of the meets.

“Everyone sees the meet going on, but nobody knows who’s running the timing, who makes sure everyone is going to hit the pad right, if the time’s right, and if relay touches are good,” Uczen said. “It’s cool to know that you’re in charge of making that run smoothly.”

Cole said he has set up almost all of the varsity sports competitions and finds himself helping with basketball and football the most. He works the scoreboard at the basketball games and helps to set up the chairs and the score table and then takes them down afterward. At football games, he ball chases and marks the first down for the referees.

Cole said his favorite part of the job is getting to interact with all of the different people on campus and seeing all of the sports.

“Being an athlete myself, I love watching all of the different sports,” Cole said. “It’s great getting to see all the athletes on campus do what they’re passionate about.”

Busa said the student workers receive an email asking them if they would like to work, and whoever is available comes into work. Sometimes they have extra assistance the night before.

“Even people who work in here that aren’t on event staff, if it’s a Friday and they’re working here, they’ll help set up events,” she said.

Student-athletes usually attain these jobs through coach referrals and then complete an application process. Nonathletes can also apply for these jobs.

Cole said working as an event staffer has been one of the best things that has happened to him as a college student.
“It’s really flexible; it’s a way to meet new people,” Cole said. “The jobs are usually fun because you’re watching sports events and you’re interacting with people around campus.”