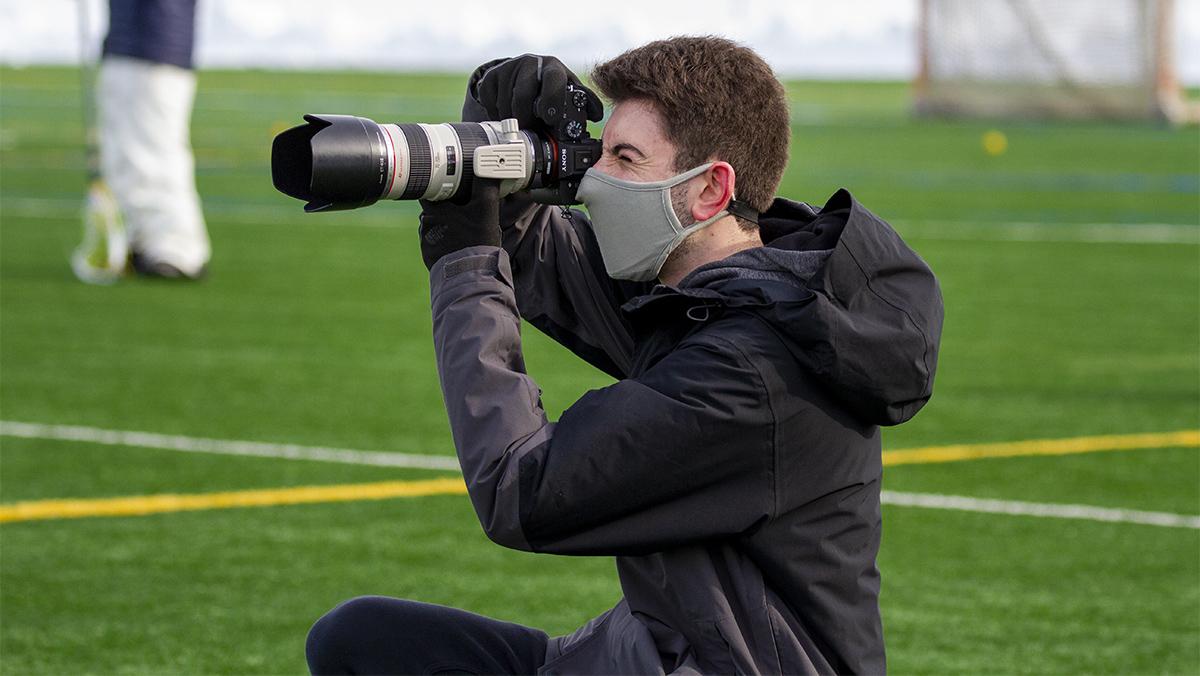 A group of Ithaca College students with just a couple of cameras and a few years of experience have teamed up to snap pictures of athletes in action to spruce up the Bombers’ social media accounts.

The Office of Athletic Communications is composed of associate director Justin Lutes and athletic communications associates Dan DeCaria and Bridget McCann. Previously, each team’s social media accounts were run by individual team coaches or managers and Lutes. In February 2020, sophomore Peter Raider approached Lutes with an idea to have a student-run creative content team. Raider is now the manager of creative content for the Office of Athletic Communications.

The group started with seven students and ran its first project during the 2019–20 basketball season with live social media campaigns during games.

The team is now made up of 19 students and is divided into two groups — one that creates the photographs, videos and graphics and one that works with teams to build a social media schedule and post the created content.

Lutes said he did not have any hesitations about giving the students access to the college’s sports platforms.

“They are all really bright students and really enjoy doing this,” Lutes said. “It provides them an opportunity to gain experience as students before they graduate in a few years.”

However, COVID-19 threw a wrench in the students’ plan. The team anticipated it would start creating content for the 2020 spring sports teams’ social media accounts, but after the college sent students home in March 2020, Raider said most of the group disbanded.

Raider said he was eager to get his team back to creating content.

“Through the fall, I knew I wanted to start this team back up, but I was trying to think of the best ways to do so,” Raider said. “Before classes started, I started to build up a team, and it all came together. It’s all working out really well.”

Raider said his passion lies in filming, and he and his team are always thinking of ways to produce unique content, like focusing on athletes during practice or featuring coaches.

Lutes said the team has spent time contacting each team’s coaching staff to identify who runs its social media accounts. The student team then works with whoever is running the account to produce content then post on their respective platforms. The primary account for Bomber Sports then reshares the post to drive traffic to that particular sport.

“They’re putting an emphasis to build out the brands of our teams by providing them with the content,” Lutes said. “Then, we will reshare or retweet or put it on our story to then drive our following back to the teams to grow their interactions as well. … We haven’t been able to play games, so I’m excited to see where it goes when we get back into competition.”

Senior Emma Fruhling is an assistant manager of creative media. She worked for Lutes’ office for two years and became involved with the creative content team after wanting to see more cohesive posts among the Bombers’ accounts.

Fruhling attends practices for gymnastics, wrestling, women’s soccer and both men’s and women’s dive teams. She said she enjoys filming and coming up with captions for posts and has just developed an interest in photography.

Raider and Fruhling said they spend about 15–20 hours each week covering practices for the account.

“Down the road, I would like to be a content creator, creative lead or social media for a manager program,” Raider said. “If the opportunity presents itself, then I would go work for a pro team. But I would like to work for a college program, more specifically in Division I, once I graduate. I think that working in college athletics is a little more valuable than working in the pros. You get to develop relationships with athletes and really tell some cool stories in college.”

Fruhling said the team is always looking for students who are interested in helping to produce content.

“There’s no better times to make mistakes than the time that you’re in college,” Fruhling said. “The biggest thing I could say to any freshman is to jump at any place or opportunity in front of you.”