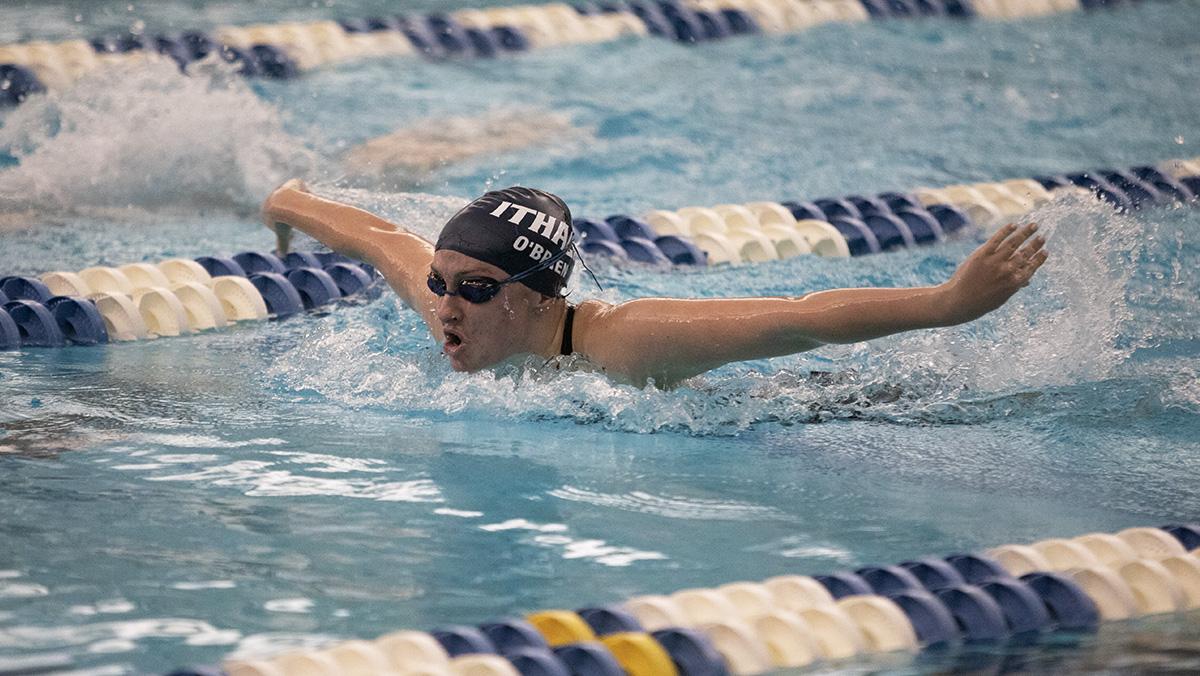 With the fall semester coming to a close and final exams approaching, the Ithaca College swimming and diving teams wrapped up the first half of the season with the excitement of the 11th annual Bomber Invitational.

Both the men and women put up strong performances at the meet Dec. 2–4 in the Kelsey Partridge Bird Natatorium, capping off a dominant start for both squads. It was the last competition on the schedule until Jan. 8 against Hamilton College. The women’s team won the meet, scoring a total of 1,641 points, while the men’s team finished in a close second, scoring a total of 1,557.5 points. The University of Rochester, who won for the men, finished with 1,575.5 points.

Associate head coach for both teams Mike Blakely-Armitage said the teams put a lot of focus on this meet in the weeks leading up to it, as well as performing well heading into the second half of the season.

“There is always a lot of positive energy leading up to our invitational,“ Blakely-Armitage said. “Our athletes put a significant amount of focus on doing well individually and for the team for this meet. Most of our athletes had season-best performances and a few had personal best performances, which tells our staff that we can expect some even better performances at the end of our season.”

Blakely-Armitage also said both teams have performed exceptionally well thus far. At the end of the fall semester, the women sit undefeated at 8–0, while the men are 6–2.

“Our women’s teams have almost hit some benchmarks that we set for the end of the season, in terms of time goals,“ Blakely-Armitage said. “The women have faced strong competition which prepares them for the tough meets ahead. For the men’s team, we have individuals swimming and training at a high level also.”

“I’m really proud of myself for this weekend,” Mlakar said. “It was one of my goals coming here because I knew what the records were. I had a feeling that I had a great chance at breaking them and it felt really good.”

Sophomore distance swimmer Matthew Stevens said the meet was a success for the team and that there were a lot of great races for the team individually. Stevens competed in a number of events at the Invitational, including winning the 1,650-yard freestyle.

“Personally, I was happy with my performances this weekend,” Stevens said. “I had a couple season bests and was just off from a couple of my personal bests which is really exciting.”

Stevens added that the meet was a great way to end the first half of the season, as well as being able to head into the new year with momentum.

“There were a lot of season [bests], and even personal bests this weekend,” Stevens said. “It sets us up for a promising second half of the season.”

Above all, Stevens said he is most looking forward to what is in store for the team in the second half of the season.

“There is a lot of bonding that goes on in the second half of the season between the training trip and winter training, so that’s always a lot of fun,” Stevens said. “I’m also really looking forward to seeing how all of the guys continue to progress as we march through the rest of the season.”

Mlakar also said that the team chemistry provided a huge boost to the performance in the first half of the season and that she is looking forward to the countdown to the Liberty League championship.

“We’re all supportive of each other and we’re all working together as we are doing really well,” Mlakar said. “I think it’s great and we’ve come together as a team and that’s why we’ve been so successful.”

Before the second half of the season begins, the team will make their annual training trip down to Florida to come together and prepare for the spring semester. Blakely-Armitage said that having last year’s training trip canceled because of COVID-19 dealt a blow to the team’s chemistry, but having the chance to have a full training trip this season is huge for the team.

“We always look forward to going on our training trip,” Blakely-Armitage said. “To not be able to have the positive team experience of the trip last season, really set our teams back with our team culture. This year I am looking forward to a fun trip with some good training.”

Looking ahead, Blakely-Armitage is anticipating seeing the progression of the team as they enter the second half of the season.

“I am looking forward to seeing how our depth performers develop as teammates and competitors,” Blakely-Armitage said. “Down the road, we have some very talented swimmers who will likely participate at Nationals. For me, the second half of the season is where we see what our team really is made of in competition and as teammates, and that’s what makes it so great.”