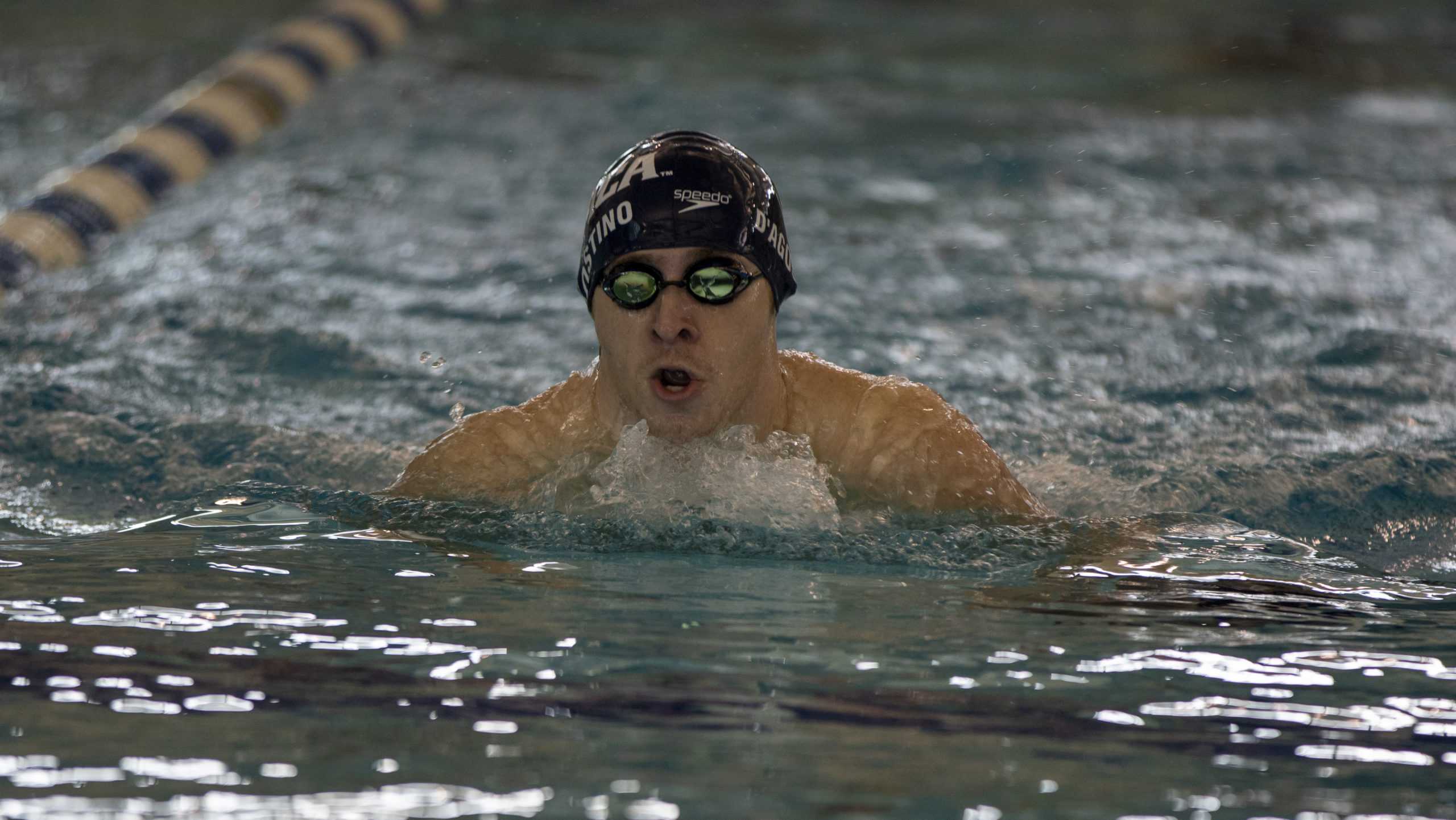 Both the men’s and women’s Ithaca College swimming and diving teams hosted the Bombers are Back Time Trial on Feb. 20 at the Kelsey Partridge Bird Natatorium at the Athletics and Events Center. The meet included only members of the team and will not count toward any league or NCAA competition record.

Hoffman-Smith earned her second first-place win of the day in the 200-yard freestyle with a time of 2:01.4 minutes. Sophomore Katie Krom came in second, followed by sophomore Lauren Brady. Freshman Luca Olivieri took first for the men’s team in 1:55.01 minutes. Junior Dylan Haraden finished second at 1:57.6, and Kleinhen finished at 1:58.88.

In two close 50-yard backstroke races, freshman Lauren Lubenow finished first for the women’s team with a time of 31.57 seconds. Senior Gabrielle Humphrey took second with 32.71 with Brady finishing just .01 seconds behind her. Junior Tim Hector then finished first for the men’s team with a time of 24.69 seconds. Freshman James Collishaw finished right behind at 24.93. Haraden took third with 27.47 seconds.

VanderSleen earned first yet again in the women’s 100-yard freestyle, coming in at 56.71 seconds. Krom and Lubenow followed in second and third. Freshman Josh Thibeau led the men’s team, finishing in 52.63 seconds. Collishaw also took home his second win of the day with a time of 48.25 with Zaneski in second and Ruby in third.

In the 100-yard breaststroke, Molnar finished with a time of 1:16.57 minutes, and Humphrey and Swinnerton finished second and third. On the men’s team, Mossi took first with 1:02.58 while barely beating senior Anthony Porto by .12 seconds. Pezzini followed just .05 seconds behind Porto.

Hoffman-Smith finished first in all four of her races with the fourth being the 500-yard freestyle in 5:27.49 minutes. Sophomore Emily Shorb took second place, followed by Kiley. Kleinhen took home his first win of the day with a time of 5:18.32 in the men’s 500-yard freestyle, followed by a 5:19.85 tie for second between Olivieri and Shatouhy.

In the women’s 50-yard butterfly, VanderSleen left her teammates in the bubbles with a dominant 27.08–second victory. Junior Olivia Schlackman finished second, followed by junior Emilee Murray. In the men’s race, Hector finished first, coming in at 24.11. Zaneski took second with 24.46, and Porto took third at 24.67.

On the other side of the pool at the diving boards, the Bombers continued to put on a show. Sophomore Rachel Lange won both the 1- and 3-meter dives, scoring 220.35 on the 1-meter board and 228.75 on the 3-meter board. Sophomore Abby Marraccino scored a second place 209.70 for the 1-meter dive, and sophomore Eliana Wallock finished in third with a score of 190.95. On the 3-meter board, senior Ava Lowell scored a 221.55, just beating out Marraccino for second place by three-tenths of a point. Senior Justin Moczynski scored 257.25 in the 1-meter dive, while sophomore Ethan Godfrey took second with 202.35. Moczynski scored 238.50 in the 3-meter dive, going unopposed.