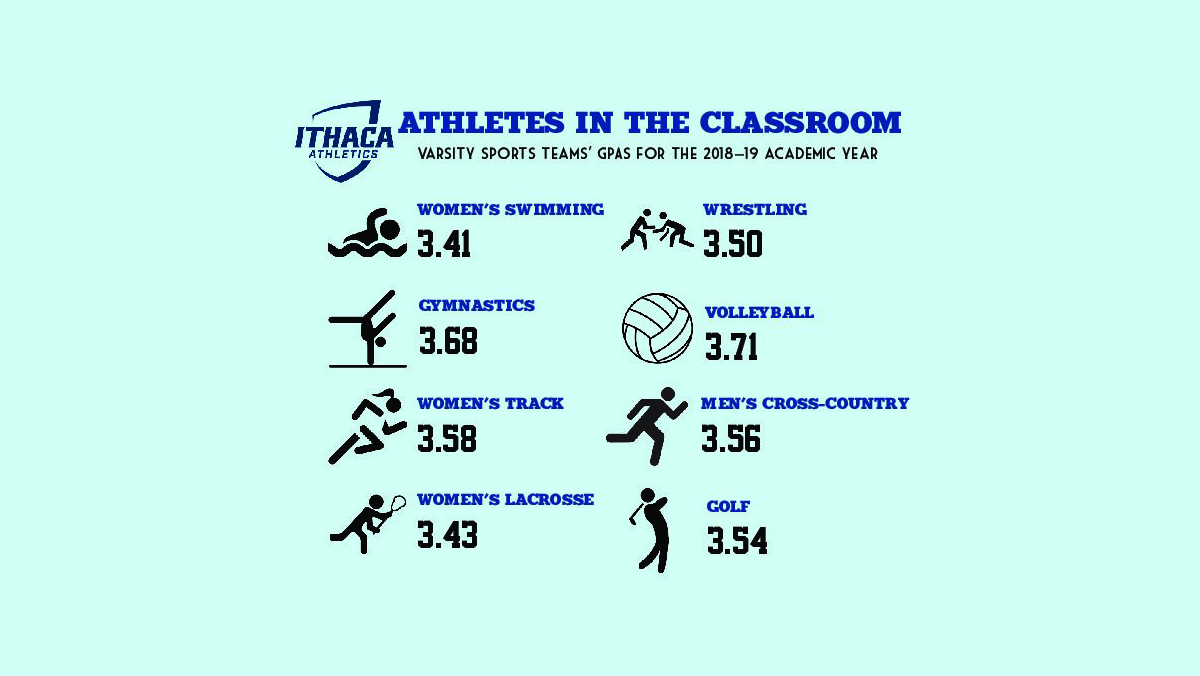 While the Ithaca College sports teams were dominating during the 2018–19 season, they were also conquering the classroom. Many teams received national recognition for their overall academic success, and dozens of athletes earned individual accolades as well.

The gymnastics team had one of the strongest academic showings of last season. The Women’s Collegiate Gymnastics Association annually releases an academic honors list, ranking Division I, II and III institutions by highest grade-point average. The Bombers placed sixth in the country for the second year in a row with their cumulative team GPA of 3.68. Eighteen gymnasts also earned the Academic All-American title.

The Bombers’ GPA ranked them second among Division III, and their impressive tally of 18 Academic All-Americans was the most of any Division III team.

Head coach Rick Suddaby said time management, motivation and dedication are all built into the athletes’ culture early in their lives due to the demanding training that gymnasts endure from a very young age.

Courtney Christoforo, junior all-around gymnast and Academic All-American, said most of the gymnasts’ discipline is self-motivated, and they have strong time-management skills because they need to, but they work hard because they want to.

“A lot of us are similar in the way that we like to succeed,” Christoforo said. “We like to be on top. What makes us good athletes and good gymnasts also transfers into the classroom and wanting to be successful there just like we want to be successful in our sport.”

“We’ve been very fortunate in being able to identify and attract really good students right from the get-go,” Raymond said. “Our students have made a standard. We didn’t do it; they did it.”

Raymond said his athletes choose the college because they know the Division III level will give them time to focus on school as opposed to the more demanding obligations of a Division I program.

“They’re not going to be making money playing basketball,” Raymond said. “They choose to come here for the academic program.”

Chris Singer, junior runner and USTFCCCA All-Academic, said he believes the college’s athletic programs allow for more flexibility between sports and school. Singer said he’s never felt as though he had to put athletics above academics.

“We always go to the library together,” Singer said. “It’s a lot easier to stay motivated when you have five or six guys around you as opposed to being alone. We hold ourselves to the standard.”

“I think at least once a week we all hear him say, ‘study, study, study,’” Singer said. “It’s like his quote.”

Nichols said his athletes are able to succeed because of the culture of the athletic program of the college. He said he believes some of the best student-athletes can also be the best students in the classroom.

“We want you to be excellent in everything you do,” Nichols said. “You can’t just be a student or stay in the library 24/7, you’ll go nuts. And you can’t just be an athlete 24/7, you’ll flunk out. There’s got to be a balance of all that, and Ithaca College does a really good job of providing opportunities for our students overall and our student-athletes.”