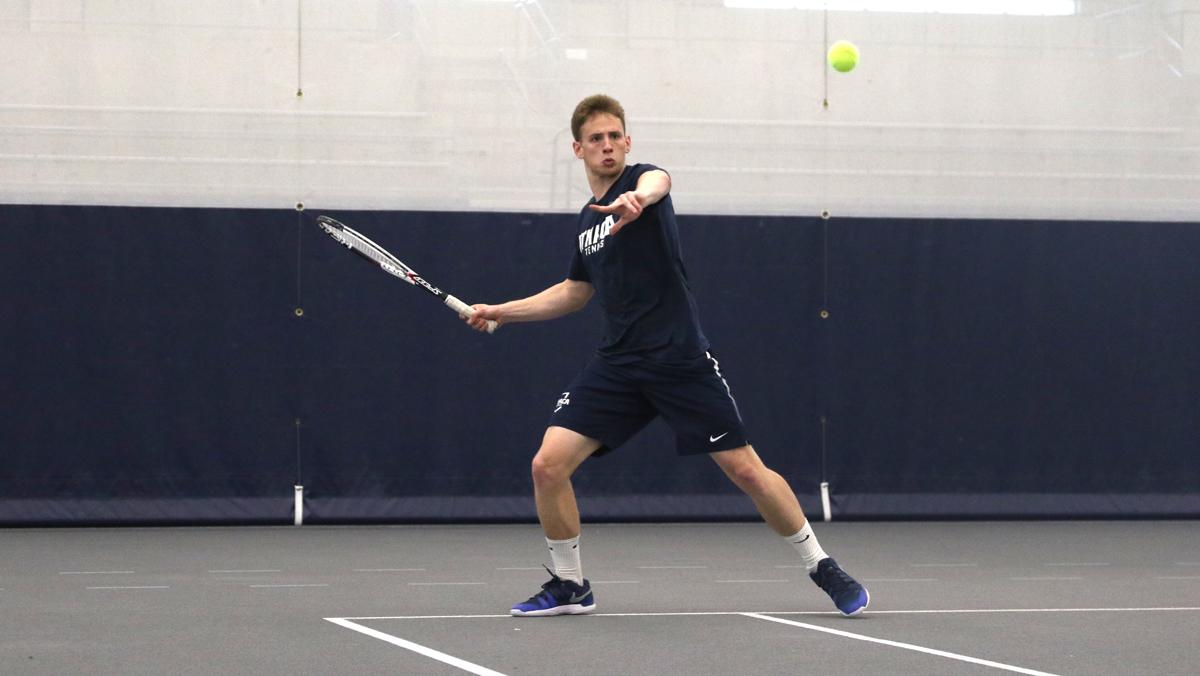 Every practice for the men’s and women’s tennis teams are approximately 1 ½ hours. But junior tennis player Sam McGrath said his practices are typically 2 ½ hours.

That’s because McGrath has arthritis pain in his shoulder and muscle tears in his elbow that cause severe pain whenever he plays tennis, so he has to complete an extra hour of stretching in practices. The injuries were caused by constant overuse from the sport approximately four years ago when he was in high school. The injuries kept him from playing tennis all of last season. He entered a rehabilitation program from September 2016 to May 2017 to try and cure the pain the injuries were causing.

Now, due to his rehabilitation program, McGrath is having a successful season.

“The rehab was a ton of strengthening stuff,” McGrath said. “I kept it up over winter break but when I came back for the spring semester, nothing was working and I got a whole new list of exercises to try. I stopped lifting completely and I did a lot of ice and heating.”

McGrath said he begins his practices with an immense number of stretching exercises he learned from rehab. He said he has to show up early to practices and matches to stretch before the warm–up to lessen the pain in his body. With the constant stretching, heating and icing he completes before every match, he said it has led him to be more successful this season.

When McGrath was going through rehab, he competed in only four singles matches while going 2–2 on the year. This season, he is currently tied for the most wins on the team, while holding a 12–6 overall record.

Even though the stretching decreases the pain, McGrath said the pain never goes away.

“I planned on training the whole past summer, and the first day I trained, everything hurt,” McGrath said. “I was in a ton of pain and I thought I couldn’t do this, but I had to just accept the fact that I was going to be in pain when I play. And I love the game enough to work through that pain.”

McGrath said that it has been amazing for him to finally be a crucial member of the tennis roster.

“I knew all along that I could be an important part of this team, and last season, I was just watching the team play,” McGrath said. “I wanted to play so bad, and it makes every win more special. One time, against Hobart this season, I [lost] and I still managed to enjoy that because after a while, I had to think I’m on the court again playing tennis, and that’s what my life is.”

Head coach Bill Austin said that even though McGrath could not always compete last season, he kept working hard on the things he could do.

McGrath competes in his doubles match with senior Lorenzo Viguie-Ramos on April 29.

Before attending Ithaca College, McGrath attended SUNY Oswego his freshman year. He said his grades in high school limited him to only attending state schools, and he knew the University of Buffalo and Binghamton University were too good for him. So he went to Oswego because it was the only school he applied to with a tennis team.

In his first year, McGrath finished the season undefeated in singles and said he wanted to transfer to another school with a more competitive tennis program. He said that even though the pain was still in his arm at Oswego, the competition was significantly less intense, which is how he was able to have an undefeated season.

When looking to transfer, he also looked at Binghamton and Christopher Newport University. He said he decided to come to South Hill because of the more competitive tennis program, the reputation of the School of Business and because it was the perfect distance from home.

McGrath said that he loves playing tennis for the South Hill squad because it provides a much different atmosphere than Oswego did.

“[At Oswego] there were players who were just beginners, and transferring here made me see the overall difference in the quality of a team,” McGrath said. “I love working hard and I love the fact [Austin] incorporates a work ethic into our practices. Being able to work hard and consistently train with good players has made the difference.”

Senior Lorenzo Viguie-Ramos, who has played 10 doubles matches with McGrath this season, said playing with McGrath brings a ton of energy to the team.

“He is a really reliable and consistent player,” Viguie-Ramos said. “We can rely on each other if one of us makes a mistake to pick each other up and get that next point. He brings a ton of fight and hope to this team.”

McGrath said his goals for the rest of his career are to be as successful as he can be.

“I just want to be the best tennis player that I can be,” McGrath said. “I was very close to just giving it up multiple times, and now, from my standards, being so successful right now has been incredible. I’m just going to fight for every match, and I’m going to do my best in every match.”